The Gear that Caught ‘Em at Sam Rayburn 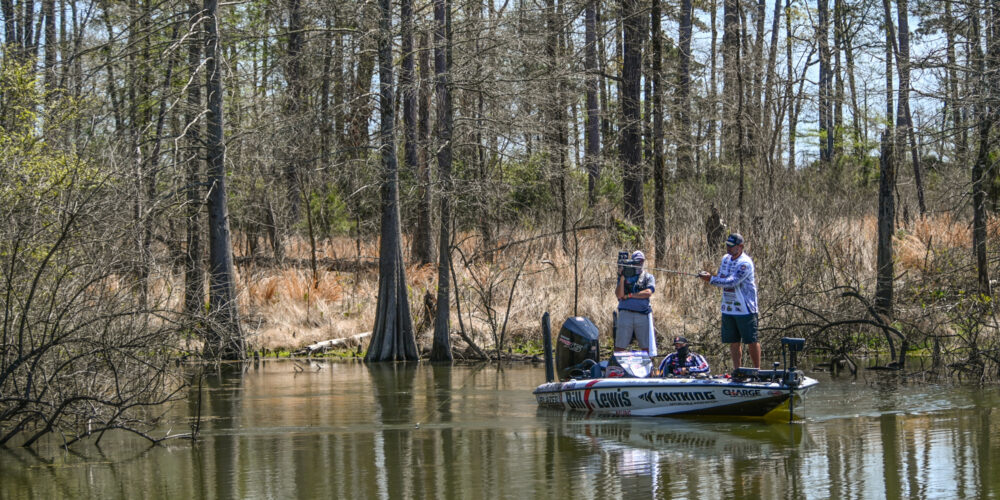 Stage One of the MLF Bass Pro Tour was a down-to-the-wire battle on Sam Rayburn Reservoir. Ott DeFoe pulled out some last-minute heroics to win his third event in Texas in a year’s time, and a handful of first-time Championship Round contenders used a variety of techniques to get the job done.

Here’s the gear that finishers two through 10 used on Sam Rayburn:

Spohrer fished a homemade white swim jig with a white twin tail trailer to connect with “almost all” of his 76 pounds, 8 ounces for the week.

“I used a heavy action 7-foot Quantum Smoke rod and 8.1 Smoke reel filled with 50-pound Seaguar Smackdown braid,” said Spohrer, who did his damage fishing in cypress trees and bushes on the north end of Rayburn.

If you know any history of Tommy Biffle, you know the odds are good he was either flipping, using a Biffle Bug as his lure, or both. In this event, it was both: tossed a silver Biffle Bug and flipped a green pumpkin and chartreuse YUM Dinger, and caught a few scorable bass on a spinnerbait as well.

Biffle used a 7-foot-6 Quantum flipping stick, a Smoke Reel and 25-pound Sunline Shooter for his flipping and pitching. For the spinnerbait, he used a 7-foot-2 medium heavy rod and 20-pound Shooter.

Biffle varied the weights he used for flipping between a 3/16 and a 5/16-ounce tungsten bullet weight, focusing on cypress trees and buck brush in dirty water.

Lucas went against conventional wisdom on Rayburn and used some very light gear to battle big bass in the weeds. While fishing grass edges in 3 to 4 feet of water, Lucas used a drop-shot with a 6-inch green pumpkin worm, rigged weedless on a 1/0 straight-shank hook and a ¼-ounce weight. He fished the drop-shot with a 7-foot medium-heavy Abu Garcia Fantasista Premier rod, a Revo 30 Premier spinning reel loaded a 6-pound X5 main line and a 10-pound 100% Trilene fluorocarbon leader.

“I had to use the light line,” Lucas said. “It was the only way to get them to bite.”

Lucas also scored some beefy bass with a swimbait fished on a ⅜-ounce jig head.

“The Cajun Baby” made his first appearance in a Bass Pro Tour Top 10 and like Frank Sinatra, he did it his way. Crochet is known as a master frog angler and he didn’t disappoint: Crochet fished the bushes in the north section of the lake with a few colors of the Snag Proof Wobbletron frog. He fished his frog with a KastKing Spirale rod and a KastKing Bassinator Elite reel loaded with 80-pound Seaguar braid.

Sprague caught the majority of his fish in mid-lake bushes and laydowns, in 1 to 4 feet of stained to clear water. He used a Lew’s 7 foot medium heavy Speed Stick with an 8.1 Lew’s Pro Speed Reel loaded with 20-pound Strike King Tour Grade Fluorocarbon line. His lure of choice was a Strike King Z-Too fished with a 3/16-ounce Tour Grade Tungsten weight and a 5/0 hook.

A Jackall Rearrange jerkbait was Pace’s primary lure to get to the championship round. He fished it with a TFO Tactical Elite 704 rod, and a Savage Gear reel filled with 12-pound HiSeas 100% fluorocarbon line. The primary cover he fished was the outside of hydrilla edges.

Relying mainly on a Berkley PowerBait The General in black and blue on a 4/0 Berkley Fusion hook, Lane pitched around bushes and cypress trees with 50-pound Spiderwire Ultracast line, using an Abu Garcia Fantasista Premier rod and left-handed Abu Garcia Revo Ike reel. Earlier in the event, Lane caught some with a Berkley Frittside crankbait and a spinnerbait.