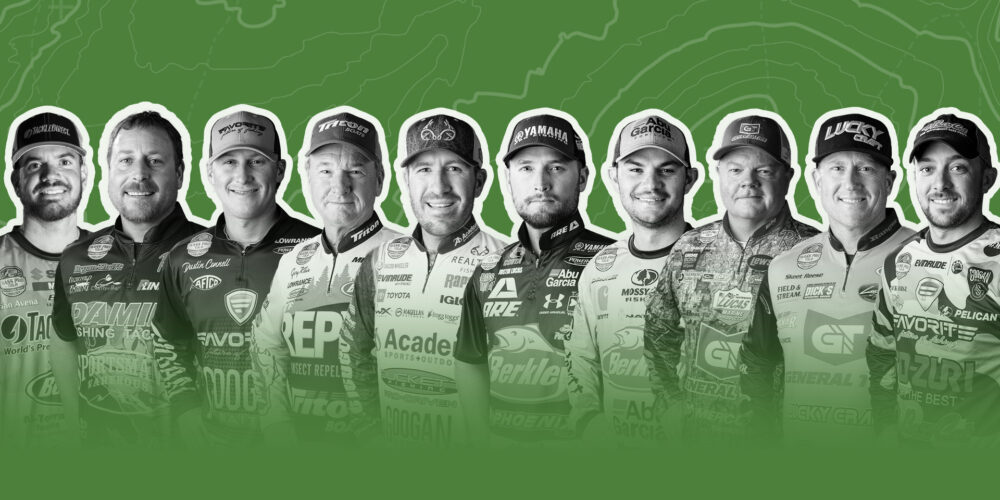 The 10 pros competing in the Championship Round of Heavy Hitters.
June 11, 2020 • Mason Prince • Bass Pro Tour

KISSIMMEE, Fla. – The field of 10 is set for the Championship Round of Toyota Heavy Hitters Presented by Venmo.

After battling each other and the elements through three days of fishing, it’s time for somebody to claim the $100,000 prize for the biggest bass of the final day. Also, don’t forget that the anglers with the most weight at the end of Friday’s final round gets $100,000 as well. There’s a chance for some big money on Friday, and here are the 10 anglers who have that opportunity:

Birge got to the Championship Round by way of his automatic qualification from winning Group A’s Qualifying Round. The Oklahoma pro caught 24 bass for 74 pounds, 3 ounces during his first two days of fishing and beat out his nearest competitor by more than 18 pounds.

The Favorite Fishing pro is now 2-for-2 on making it to Championship Rounds in Florida this season (he finished ninth at Stage Two on Lake Okeechobee).

Reese, like Birge, was able to skip the Knockout Round thanks to his win in Group B’s Qualifying Round. He boated 20 bass for 67-1 mostly in the Shingle Creek area fishing current. This will be Reese’s first Championship Round of the 2020 season, not to mention his first since the inception of the Bass Pro Tour.

The California pro finished in seventh place during a B.A.S.S. event in Kissimmee in 2000.

Rose comes into the Championship Round already with $25,000 in his pocket from the 9-2 largemouth he caught during the Qualifying Rounds. The Arkansas angler took the top spot in the Knockout Round with 13 bass for 52-5—an average of over 4 pounds per fish caught.

The 2020 Patriot Cup champion has yet to make a Championship Round in the 2020 Bass Pro Tour season. Rose had eight wins and 49 Top-10 finishes in his FLW career, but none of those came on the Kissimmee Chain of Lakes.

The 29-year-old Connell is one of four young guns competing in this Championship Round. Connell has a fifth-place finish during Stage One at Lake Eufaula this season.

Connell comes into the final portion of this tournament as one of two anglers who had a Top-10 finish on the Kissimmee Chain when the Bass Pro Tour premiered in 2019. The Alabama pro collected a ninth-place finish during Jordan Lee’s win.

Speaking of Lee, the 2019 Stage One champion is back again with a chance to win $100,000 on the Kissimmee Chain. He might have a chip on his shoulder entering the final day after missing out on $50,000 for the biggest bass of the Knockout Round by 1 ounce. Michael Neal caught a 8-15 monster with just 30 minutes remaining in Period 3 to dethrone Lee’s 8-14 he caught in Period 2.

Lee is no stranger to Championship Rounds on the Bass Pro Tour. This will be his third this season after finishing ninth in Stage One and seventh in Stage Two. The Alabama pro is only 28 years old but is well on his way to becoming one of the most successful anglers in professional bass fishing history. A win on Friday will only add to his already impressive resume.

One of the more entertaining anglers on the Bass Pro Tour, Adrian Avena is entering his second Championship Round of 2020. Remember that guy who jumped in the freezing cold water at Stage One to pull out a stuck 4-pounder on Lake Eufaula? That was Avena.

I guess you can say he has a flair for the dramatic. He was one of four anglers fighting for the final two spots in the Top 8 of the Knockout Round. A run of three fish for 11-8 in the final 10 minutes helped push Avena onto Friday.

Justin Lucas was the 2018 Bassmaster Elite Series Angler of the Year before joining the Bass Pro Tour. After 12 events, he will be entering his first Championship Round.

The Alabama pro caught 13 bass for 40-3 during the Knockout Round, good enough for the fifth-place position. Lucas mentioned to the camera as time wound down on Period 3 how he was finally feeling comfortable fishing the MLF format. We’ll see if his newfound comfort leads to his first MLF win.

A newcomer to the Bass Pro Tour this year, Thrift has made his presence known. Well, really, everyone already knew who he was thanks to his 12 career FLW wins and more than $3 million in earnings. It should be no surprise that the North Carolina angler has picked up the MLF format quickly and is a consistent contender.

This will be Thrift’s third Championship Round of 2020—he finished second in Stage One and 10th in Stage Three. He caught 12 bass for 37-8 in the Knockout Round to secure his spot in the Top 8.

Thrift finished in eighth place during a Tackle Warehouse Pro Circuit event on Lake Toho in 2008.

Much like Lee, Wheeler needs little introduction. One of the most dominant anglers on the Bass Pro Tour—the 2019 Stage Seven champion, the defending General Tire World Champion and the 2020 Stage One champion—Wheeler is consistently in the hunt for a trophy.

The Indiana native collected the win in Eufaula and a third-place finish on Lake Okeechobee this year. This will be his first Top 10 on the Kissimmee Chain.

One of the co-founders of Major League Fishing and a Professional Bass Fishing Hall-of-Famer, Gary Klein will be competing in his first Championship Round of 2020. The Texas pro finished in the Top 10 twice in 2019, neither of which were in Stage One of 2019.

Klein was the last man inside the Top 8 during the Knockout Round, edging out Wesley Strader by only 1-5. The Mercury pro caught 11 bass for 36-3 on Thursday.

The scorable bass weight increases to 3 pounds for the Championship Round. The MLF NOW! live stream begins at 6:45 a.m. ET on MajorLeagueFishing.com, the MLF app and MyOutdoorTV. The 10 anglers will fish for three periods to find out who will take home the $100,000 prize as well as a $100,000 check for the biggest bass of the day.