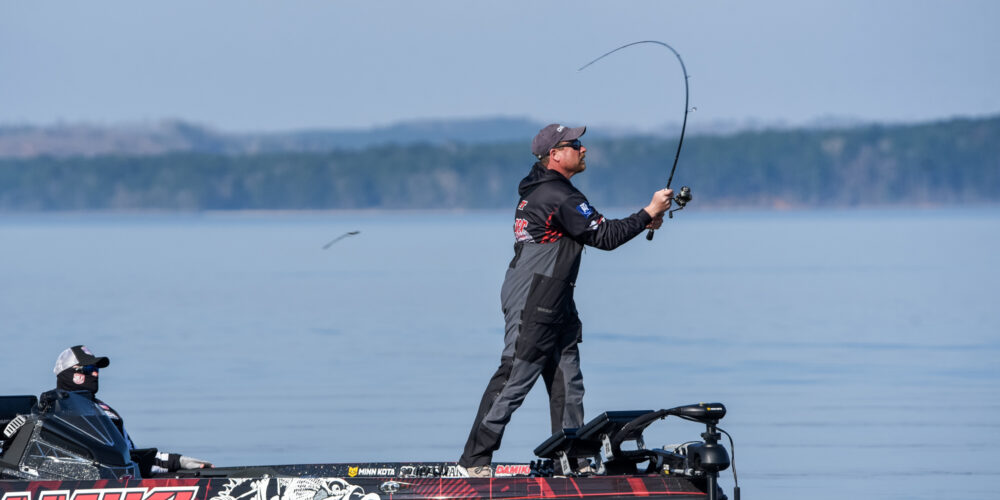 Bryan Thrift won Knockout Round 2 and will be advancing to Friday's Championship Round. Photo by Garrick Dixon
February 25, 2021 • Mason Prince • Bass Pro Tour

EUFAULA, Ala. – The bite improved during Knockout Round 2 of REDCREST Presented by Old Wisconsin Sausage, but there were still some anglers left scratching their head at the end of the day. Warming temperatures paired with bright and sunny skies spelled a move to the bank, but the anglers with the most success—those that are moving on to the Championship Round—found their fish offshore with a variety of tactics.

The 10 anglers who competed on Wednesday during Knockout Round 1 only managed to register 32 scorable bass. Fast forward to Thursday, and Group B nearly doubled that total with 59 total, 14 of which came from round-winner Bryan Thrift.

Bryan Thrift, Ott DeFoe, Michael Neal, Takahiro Omori and Anthony Gagliardi are advancing to the Championship Round where they will join Zack Birge, Dustin Connell, Jacob Wheeler, Mark Davis and David Dudley. The five anglers who fell below the Toro Cut Line and won’t be advancing out of Group B are Edwin Evers, Jordan Lee, Alton Jones Jr., Brent Chapman and Randall Tharp.

For the third time in four days of competition, North Carolina pro Bryan Thrift ended the day on top of SCORETRACKER®. Thrift finished the day with 14 bass for 40 pounds, 8 ounces, with more than 16 pounds of separation between himself and second-place finisher Ott DeFoe.

“I just got off to a great start in that first period that really set me up for the whole day,” Thrift recalled. “I had 11 fish in the first period and I really spent the rest of the time trying to figure stuff out for the Championship Round.”

Thrift caught the majority of his bass on one spot where he was working a combination of a swimbait and a shaky head worm. He knows his fellow competitors saw him catching fish from that spot, and he hopes that if and when he heads there tomorrow, there’s still some fish left. If there is, he feels pretty good about his chances to take home a $300,000 check and his first MLF win.

“Winning REDCREST would be an amazing accomplishment, especially since it’s my first one ever,” Thrift said with a smile. “I’m another good day away from winning this thing and I’m going to try my best.”

The first 15 minutes of Period 1 saw DeFoe and Thrift keeping pace with one another bass for bass. However, DeFoe’s spot of offshore bass become much less productive after that first 15 minutes, leaving the Tennessee pro without a scorable bass for nearly four hours.

“I’ve been really good in the mornings and I feel like what I’m on right now is a morning-only deal,” DeFoe explained of his afternoon struggles. “Once it warmed up, my crankbait just wasn’t working in that area so I had to move on.”

DeFoe managed one scorable bass in Period 2 and was closing in on falling out of the top five in Period 3. That’s when he made a change in location and bait that saved his REDCREST.

“I came up the lake where the water was dirtier and moved shallow around some grass swimming a jig,” DeFoe detailed. “Those last two 4-pounders secured me and it was a great feeling. I got my work cut out for me trying to beat Thrift and the rest of those guys tomorrow.”

Neal Pulls Out Another Nail Biter

Michael Neal needed a scorable bass in the final minute of the Qualifying Round to edge out Fletcher Shryock for the final spot in the Knockout Rounds. Thursday, he did the same thing, this time to defending REDCREST champion Edwin Evers.

With less than six minutes to go in the round and outside of the top five, Neal pulled up to an offshore brushpile and caught a 3-10 on a jerkbait. That 3-pounder put him 1 pound ahead of Evers for the final spot.

“I really thought Edwin was going to catch one at the last second and knock me out,” Neal admitted. “I may have looked calm but my heart was racing a million miles an hour that entire third period.”

Once again, with less than a minute remaining in the round, Neal pulled another 3-pounder out of a different brushpile to give him some cushion and secure his spot in the Championship Round.

“I’m beyond excited that I’m moving on and I’m as ready as I can be for tomorrow,” Neal said. “I’m going to stay out deeper and avoid the shallow water because I think that gives me the best shot to win.”

The final 10 anglers return to Lake Eufaula tomorrow for the Championship Round. The angler with the most weight at the end of the day will take home the $300,000 prize. Conditions will be cloudy with a slight chance of rain and temperatures in the low- to mid-70s.

Watch all three periods of competition during the MLF NOW! live stream beginning at 7:45 a.m CST on Friday. Watch for FREE on MajorLeagueFishing.com, the MLF app, or the MyOutdoorTV app.