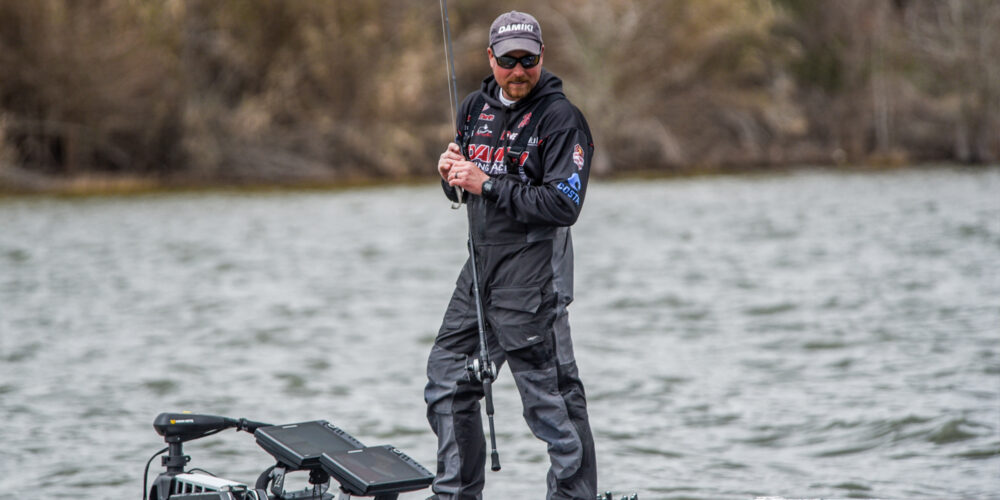 EUFAULA, Ala. – There were multiple questions going into the start of REDCREST 2021 presented by Old Wisconsin Sausage on Lake Eufaula. Most of those questions focused on how the fishing would be for the 40-angler field after just one day of practice.

Eufaula is certainly full of big bass, and all of the anglers fished on this impoundment of the Chattahoochee River to kick off the 2020 Bass Pro Tour season, but could they figure out the big lake in just one day? If you compare today’s first Qualifying Round to the first day of the 2020 event, the answer is a definite “Yes!” – the field surpassed those totals from 2020, and the fishing is expected to get better as the week goes on.

In last season’s event, the opening round saw 129 bass placed on SCORETRACKER® and Chris Lane claimed the lead with 35 pounds, 12 ounces. Monday, 156 bass were scored and North Carolina’s Bryan Thrift made it look easy as he cruised to a 45-pound day, with the bulk of that total by 1 p.m. before shifting gears into practice mode.

Thrift Runs Away in the Second Period

Thrift’s list of wins and top-10 finishes is expansive and it covers many different fisheries, but he has an affinity for Lake Eufaula. Thrift has finished with a win and second place in Tackle Warehouse Pro Circuit competition and also finished second here last year, in his first-ever Bass Pro Tour event.

It’s no stretch to say that the North Carolina pro knows his way around Eufaula as well as any angler fishing this week, and he picked up right where he left off last year.

“Today started about how I expected,” Thrift said. “I caught a few early, but it took me longer to get comfortable. Once I caught five or six (fish), I could fish more relaxed.”

He took control during a flurry in the second period that yielded multiple solid fish, including one in the 5-pound class and the day’s biggest bass, a 7-1.

Two scorable bass shortly before 1 p.m. caused Thrift to shift gears and start scouting. His lead was comfortable at that point and he effectively turned to practice mode before adding another bass late in the day.

“Once the lead was comfortable, I went and practiced,” he confirmed. “I think I have enough weight to advance without catching a fish (Tuesday), so I’ll do a lot of looking.”

The weather forecast is expected to get more pleasant this week and Thrift thinks it will affect the fishing for the better.

“It’s going to change with sunshine and 70-degree days,” Thrift said. “Those fish already want to push shallow; they’re ready now and will continue to push towards the banks.”

His 45-pound day was more than any single day total he had in the 2020 event, where he finished second to Jacob Wheeler with 40-11 on the final day.

Like Thrift, Ott DeFoe had a great showing when he was on Lake Eufaula last year, finishing third. He experienced a strong morning bite each day of that event and did it once again today.

“It was an excellent start to the day and was like déjà vu from last year,” DeFoe said. “I was able to start catching them pretty early and got comfortable pretty quickly.”

DeFoe recorded 24-10 during the first period and was the leader going into the first break.

Looking ahead to Qualifying Day 2, he plans to explore some new ground tomorrow.

“I feel pretty confident that I am in the Knockout Round already,” DeFoe said. “I’ll start expanding and looking for new water and think the fishing is going to continue to get better.”

He believes he on the right program to continue catching fish as the week goes on.

“The weather looks like it is going to be beautiful during the next few days, but the nights are still pretty cold,” DeFoe says. “I’m far enough out in the mainlake with that cooler water hitting it that I think fish will stay in my areas.”

After tallying nine bass for 26-4, Stephen Browning finds himself in third.

“Today went well overall,” Browning said. “I had a good start, but it got tough midway through the second period. I honestly don’t think I need to catch another bass to advance, but I need to catch some tomorrow to feel better about my area. I will look and practice some but have a goal to catch 10 pounds.”

All 40 anglers will return to Lake Eufaula tomorrow, trying to get inside the top 20 to advance to the Knockout Rounds. The predicted warming trend will start tomorrow with forecasted highs of 69 degrees with sunny skies and light winds.

Watch all three periods of competition during the MLF NOW! live stream beginning at 7:45 a.m CST on February 22-26, 2021. Watch for FREE on MajorLeagueFishing.com, the MLF app, or the MyOutdoorTV app.