Thrift Frogs His Way to the Top; Coulter Lands 6-14 for Big Bass in Group B 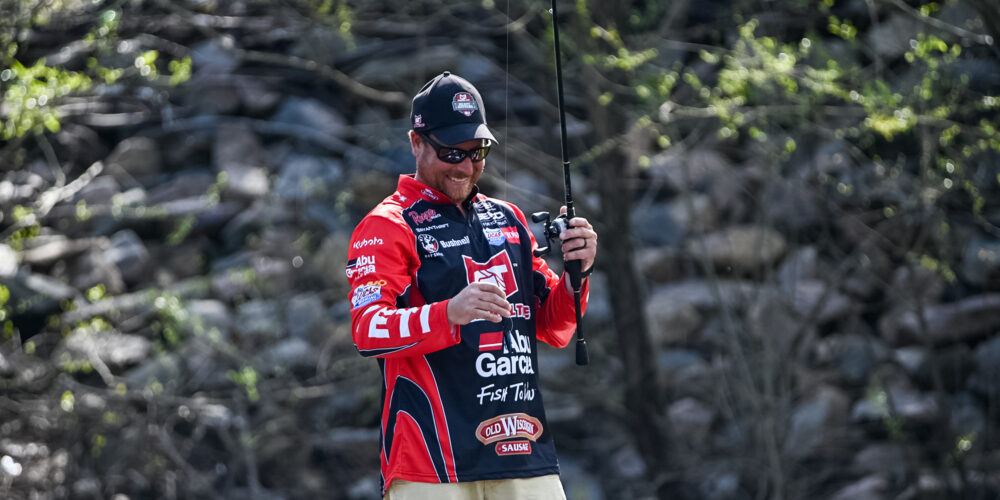 RALEIGH, N.C. – The 20 anglers competing in Group B on Saturday showed why Falls Lake is just as good as Jordan Lake during the second qualifying day of General Tire Heavy Hitters Presented by Bass Pro Shops. As productive and impressive as the fishing was on Jordan Lake for Group A on Friday, Falls proved its worth for Group B.

There weren’t any 7-pounders caught by Group B, but there were 12 4-pounders, nine 5-pounders and six 6-pounders logged into SCORETRACKER®. The quality and quantity definitely showed up in North Carolina, and with one more day of competition on Falls left to go, the anglers know that there’s still plenty of opportunities for big bites.

Thrift Puts on a Frog Clinic

Bryan Thrift is the leader in Group B after the first day on Falls, quite fitting for the North Carolina pro. Thrift brought in the most bass of the day with 13, weighing a total of 44 pounds, 7 ounces. He heads into Monday’s second qualifying day 6-12 ahead of second-place Stephen Browning.

Thrift caught all of his fish besides two on a SPRO frog that fished around wood, laydowns and grass. The combination of the right bait and the right area proved to be the winning formula for Thrift.

“I was in a productive area and that was just the right bait to use at that time,” Thrift said. “I was able to catch my biggest fish (a 5-13) on a 5-inch Damiki Stinger, but the frog was really the bait that did the most damage for me today.”

As he heads into an off day before his second qualifying day, Thrift’s focus is solely on holding on to his lead and securing a spot in the Championship Round. But in order to do that, Thrift says he’s going to need to find a new area that can be just as productive as the one he found today.

“The one area I caught all my fish today is the only place I ever got a bite, so that needs to change,” Thrift explained. “I fished some other places but just couldn’t get a bite. I’m not going to win just off of that one area, so I need to go looking for someplace else.”

Coulter Makes his One Bite Count

It wasn’t his best day on the water, but Brandon Coulter put himself in a position to make it a little better after catching a 6-14 largemouth, the Berkley Big Bass of the day. That was the only scorable bass Coulter brought into his boat on Falls Lake, but the Tennessee pro is more than happy holding the big bass lead at the end of his first day.

“I’m not sure that weight is going to hold on once Monday rolls around, but it feels good right now,” Coulter said with a chuckle. “My money is on someone catching a bigger one. I’m more excited with how I made the adjustment to catch that fish.”

Coulter entered Period 3 with no fish on SCORETRACKER® and needing to make a big move. The Savage Gear pro ran 27 miles to the complete opposite end of Falls Lake until he found the right bush to flip to. Coulter caught the 6-14 on a bait here while targeting cover here.

“I flipped into this bush with a Savage Gear 3D Craw and caught that fish in less than 10 minutes,” Coulter recapped. “I had 65-pound braid on so I knew I could get away with it. Got it to bite and made my only fish count. I’m happy with the decision I made to move because it turned out to be the best one I made.”

Group A returns to Jordan Lake tomorrow for their second and final qualifying day. Only the top 10 pros at the end of three periods will advance to the Knockout Rounds. The angler with the most weight on SCORETRACKER® at the end of the day will earn an automatic berth in the Championship Round on Shearon Harris Reservoir. The angler with the biggest bass in Group A will earn a $25,000 check. Anthony Gagliardi currently holds the big bass lead with a 7-15.

Watch all three periods of Group A’s Qualifying Day 2 during the MLF NOW! live stream beginning at 7:15 a.m EST on Saturday. Watch for FREE on MajorLeagueFishing.com, the MLF app, or the MyOutdoorTV app.