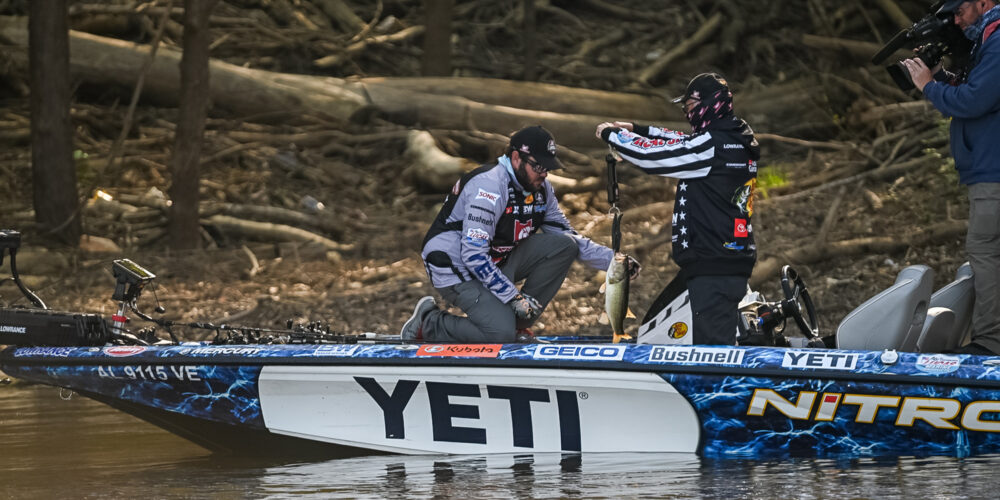 RALEIGH, N.C. – General Tire Heavy Hitters Presented by Bass Pro Shops lived up to its name on Day 1 of competition from Jordan Lake. The pollen-covered lake served as the perfect place to get Heavy Hitters started as a beautiful spring day in North Carolina turned into a Group A slugfest.

Michael Neal ended the day on top of SCORETRACKER® with 13 bass for 51 pounds, 15 ounces while Anthony Gagliardi finished his day one step closer to being $25,000 richer thanks to his 7-15 largemouth for the Berkley Big Bass of the day. If that weight holds the top spot in Group A after Sunday, Gagliardi will take home a $25,000 check.

In all, Jordan Lake produced 31 bass over 4 pounds, 10 over 5 pounds, six over 6 pounds and two over 7 pounds. The good news for the anglers—it doesn’t show any signs of slowing down when they get to their second day of competition on Sunday.

Neal on Top of Group A

It might be surprising to see the quiet and stoic Michael Neal on top of SCORETRACKER®. That is, unless you’ve been paying attention for the past few years. Neal continues his growth into one of the most consistent anglers on the Bass Pro Tour, after finishing 11th in the Angler of the Year race two years in a row and a second-place finish at REDCREST on Lake Eufaula.

The Tennessee pro fell just short of setting a record for highest weight total in a qualifying round and even added a 7-12 to his impressive total of 51-15. Neal began his morning on a tear, catching 10 bass for 33-8 while jumping into first place. But his second period was a struggle to say the least. Zero scorable bass for Neal in Period 2 caused him to fall down into fourth place.

“The morning started with me finding some fish around a shad spawn near the bank,” Neal recalled. “I was catching them on a chartreuse and white vibrating jig, but then the weather just changed. It got really bright, calm and slick. Not really a conducive environment for using a vibrating jig. That’s why I struggled so much in Period 2, honestly.”

After going nearly four hours without a scorable bass, Neal brought in his biggest fish of the day—a 7-12—to get him back on top of SCORETRACKER®. The Big Bite Baits pro also landed a 5-12 and a 4-15 in Period 3 to secure his top spot for the day. He will start Sunday with a 5-3 lead over Boyd Duckett, a lead he hopes to hold on to and secure himself a spot in the Championship Round.

“This lake is just so good right now, I think I’m going to have to do exactly what I did today or do better to end up in first place after Sunday,” Neal predicted. “The quality of fish and the amount of them in this lake sets up anyone to go on a great run towards the top of the leaderboard. I have one goal, and that’s to win. Anything short of that will be a failure at this point.”

In a normal five-fish-limit tournament, five fish for 21-1 would be nothing to shake your head at, especially when your kicker is a 7-15, and the biggest bass caught in your group. Still, Anthony Gagliardi finds himself sitting in 15th place and 9-12 below the Toro Cut Line.

“If I didn’t catch that 7-15, I could be in a whole lot of trouble,” Gagliardi admitted. “Flipping these laydowns, I’m not going to catch a ton of fish to be able to keep pace with these guys. But I knew I was bound to catch a big one doing this, and I was right.”

While his focus is advancing to the Knockout Round, it’s easy for Gagliardi to find a silver lining in his performance thanks to his Berkley Big Bass of the Day. The South Carolina pro was fishing laydowns in Period 2 when he set the hook on the 7-15 lunker.

“I came up to a laydown I had marked during practice that had some depth to it,” Gagliardi recapped. “I knew when I pulled up it was going to be good. I made a pretty long cast beside the laydown and the fish got it on the fall.”

Gagliardi was using a Berkley PowerBait MaxScent Creature Hawg with a 5/16 tungsten weight to go along with a Level 7-foot-6 Heavy Flippin’ Stick and 50-pound Gamma Torque braid to catch the near-8-pounder. He knows he has work to do if he wants to advance to the Knockout Round, but if his 7-15 holds on for the big bass in his group, Gagliardi admits he wouldn’t be too upset heading home early if it meant he had $25,000.

Group A has Saturday off while Group B gets their Heavy Hitters run started on Falls Lake Saturday morning. The 20 anglers in Group B will fish for three periods to position themselves above the Toro Cut Line while also searching for the Berkley Big Bass of the Day. Group A returns to action on Sunday where the weights carry over from Day 1 and the top 10 anglers move on to the next rounds.

Watch all three periods of Group B’s Qualifying Day 1 during the MLF NOW! live stream beginning at 7:15 a.m EST on Saturday. Watch for FREE on MajorLeagueFishing.com, the MLF app, or the MyOutdoorTV app.