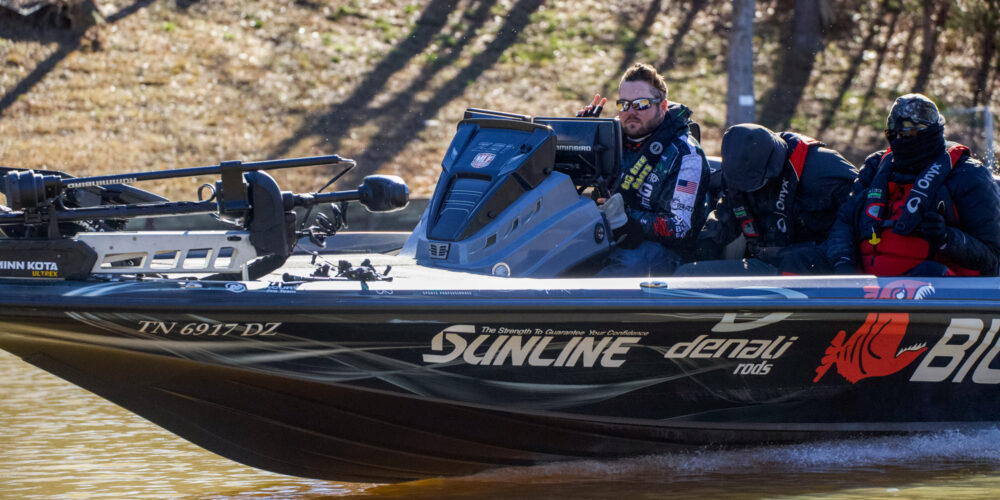 EUFAULA, Ala. – It was a “mixed bag” kind of day Tuesday on Lake Eufaula at the second Qualifying Round of REDCREST Presented by Old Wisconsin Sausage. The anglers at the top of the leaderboard mainly spent their day searching and exploring new water, while those below them fought it out to remain in the Top 20 (or to try to climb into it).

Simply keeping pace was the goal for most of the field: anglers who did the best on Day 1 spent the bulk of their time idling and practicing, and the majority of the Top 20 below them remained idle in the standings, posting enough weight to keep their positions for the Knockout Rounds.

There weren’t many drastic shifts on SCORERACKER® as just three anglers moved inside the Top 20 and three subsequently fell out. But there was still some last-minute drama to be seen on MLF NOW!, especially in the final minute.

Fletcher Shryock maintained his position around 20th place for much of the afternoon, but it slipped from his grasp in the closing moments. Michael Neal boated a 3-pound, 4-ounce bass to move past Shryock (who also lost a fish during the same time frame to make it an even tougher pill to swallow).

Edwin Evers, Jordan Lee and Neal jumped into the Top 20, while Mark Rose, Scott Suggs, and Wesley Strader have been eliminated after starting the day safely inside the Toro Cut Line.

Thrift, DeFoe, and Others Explore

Both Bryan Thrift and Ott DeFoe found themselves comfortably ahead of the pack after the first day, with solid leads over most of the field heading into Day 2. Both stated that they planned to use the second Qualifying Day as a scouting mission, and they did just that.

Thrift boated two bass for 5-4 today to push his total to 50 pounds even over two days. DeFoe was in second place going into the day and brought in one fish for 2-6, dropping to fourth.

When both of them return to the water for Knockout competition, they won’t be holding back and their catch rates are sure to increase.

Evers made the biggest jump of the day, going from 25th place to eighth – the reigning REDCREST champion has kept his hopes alive as he tries to defend his title.

Aside from his big jump in the standings, Evers’ total weight nearly tripled, the Berkley pro credits a new location for his success today.

“I moved areas and tried to find more stable water,” Evers said. “It’s changing daily out here and I feel good about what I saw.”

Looking ahead, Evers believes he’s on track to continue to catch fish and stay in contention for the win.

“I feel good about my chances and with what the weather is supposed to do,” Evers said. “I know there’s a group of fish deep and a group shallow. The more warm days we can have will push more of those deep fish shallow, which is what I want them to do. I just need them to hurry up and get there.”

As time expired, Neal was waiting patiently for any last-minute updates that would determine his fate.

“I’ve been on both sides of this fence,” Neal said. “It seems like I live on the (Cut Line) and I don’t know why. I’d like to get away from that because it’s giving me too many gray hairs.”

This time, Neal was on the right side of the fence, thanks to his final catch on a ChatterBait.

“I’ve been catching all of my fish out of grass and was running out of time in the day,” Neal recalled. “I rounded a point and saw some wood and made what I call the best catch of my life. I cast the bait way up under that tree, which isn’t easily done with a ChatterBait, but my line wrapped over a limb away from underneath the tree. When the bait got to that limb, that fish ate it.”

Neal feels fortunate to have that fish, no matter how it happened.

“There was something special about that whole thing,” he said. “Maybe that was meant to be and turns into a $300,000 win at the end of the event.”

Ten of the 20 anglers who survived the round will return to Lake Eufaula tomorrow for the first of two Knockout Rounds. They’ll try to finish inside the Top 5 to advance to the Championship Round. The warming trend will continue with forecasted highs of 74 degrees with sunny skies and light winds out of the southwest.

Watch all three periods of competition during the MLF NOW! live stream beginning at 7:45 a.m CST on February 24-26, 2021. Watch for FREE on MajorLeagueFishing.com, the MLF app, or the MyOutdoorTV app.