Thrift Moves on To Championship, Vinson Makes Charge to Knockout Round 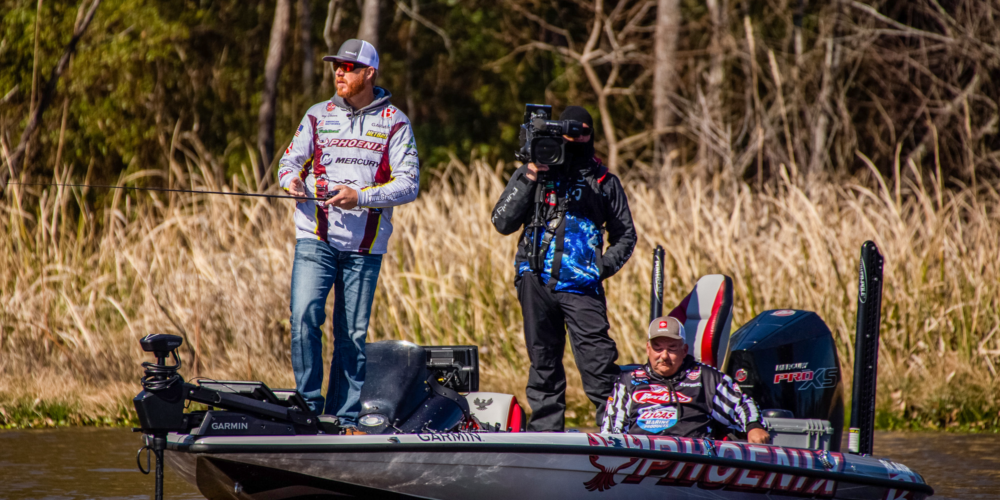 EUFAULA, Ala. – On a slightly tougher fishing day on Qualifying Round 3 at the B&W Trailer Hitches Stage One Presented by Power-Pole, there was still plenty of drama both at the top of SCORETRACKER® (and for those trying to stay alive in the tournament).

The total bass caught, and the total weight was down a bit on Lake Eufaula, but the famed lake is still kicking out plenty of quality bass for the 80 anglers, and that should continue as warmer weather is on the way.

A newly implemented rule for the 2020 Bass Pro Tour season is already providing more suspense at the top of the standings. Anglers who lead their group after two days of fishing in the Qualifying Rounds gain an automatic berth into the Championship Round and get to bypass Tuesday’s Knockout Round.

Instead of letting up and going into practice mode when they were safely above the Elimination Line – as was frequently the case last year – anglers were fighting to earn the top spot.

Thrift Qualifies for the Championship Round

Chris Lane started the day comfortably in the lead and remained there through two periods before eventually falling to fifth place. With five minutes left in Period 2, Lane was informed that Bryan Thrift had come within 5-2 of his lead.

“Here he comes. Here comes ‘Thrifty,'” Lane said on MLF NOW! and then Thrift made his move ahead and ended the day with more than 11-pounds more than his closest competitor.

The fact that Bryan Thrift was going to be a force to reckon with on the Bass Pro Tour was never really in doubt. But, to do it so quickly into his MLF career was impressive.

Thrift took control of the top spot with the biggest bass of the day, a 6-3, shortly after Period 3 began and then added five more bass before the end of the day, including a 5-5.

Thrift said his late-day success was a surprise.

“I did a lot better than I expected there at the end,” Thrift admitted. “It started so slow, and I only had four fish between the first two periods.”

When asked if he’ll be able to duplicate what he did during his second Qualifying Round, Thrift said he isn’t sure.

“I’m not getting enough bites to have a pattern,” he said. “I’m running different stuff and throwing different baits; there’s no way I can call my shots and know what is going to work.”

What’s he going to do with two off days?

“Probably sleep a little, re-line some rods, that’s about it,” Thrift said with a laugh.

Greg Vinson started the day in 20th place and moved all the way up to second by the time the day was done.

Vinson’s ascension toward the top was thanks to a day’s best catch total of 12 bass. Those fish weighed 32-8, which was slightly less than Thrift’s sum. Vinson believes that the pattern he’s on should allow him to continue catching good numbers of fish this week.

“The conditions are setting up better for me as the week goes on,” he shared. “Even though things are starting to change. I should be able to duplicate it.”

As is always the case on an elimination day, anglers moved into the Top 20, and some dropped out of contention.

Stephen Browning started the day in 11th but fell to 23rd, while Boyd Duckett slipped from 13th to 25th. Mark Daniels, Jr., began in 19th and dropped to 24th.

On the other side of things, Andy Montgomery moved from 22nd to 18th, Alton Jones, Jr. went from 26th to 13th, and Brent Chapman jumped from 28th to 11th place.

Group B will take their turn at their final Qualifying Round tomorrow to see who gets to stay and who’s done for the week. The warming trend continues with a mostly cloudy day forecast to reach a high of 75 degrees.

Watch all three periods of competition during the MLF NOW! live stream beginning at 7:45 a.m CST on February 7-12. Watch for FREE on MajorLeagueFishing.com, the MLF app, or the MyOutdoorTV app.