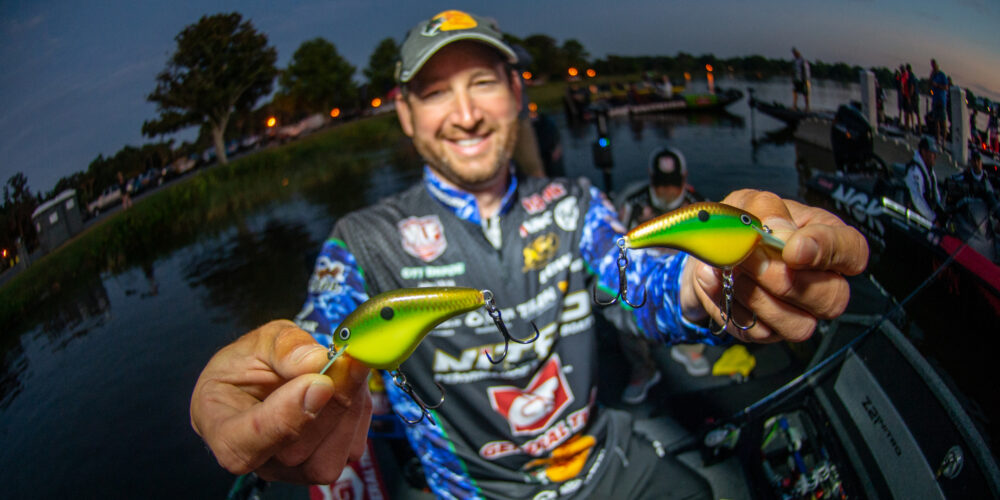 LEESBURG, Fla. – The six days of fishing at the Favorite Fishing Stage Three Presented by Bass Cat Boats on the Harris Chain of Lakes proved that the bass fishery at this central Florida chain is one of the best in the region, even under hot, still conditions on the final four days of competition.

Each day of the event included hundreds of bass caught on a host of different techniques. To nobody’s surprise, the vibrating jig was the top bait of the week, kicking out an astounding 652 collective bass for the anglers.

Here’s how the Top 10 anglers caught their fish this week.

Bucking the vibrating jig theme, Ott DeFoe scored his second win of the season by targeting the shad spawn early and then cranking later in the day.

“Hard cover was the biggest thing for me,” he said. “I’d start each day super shallow and target seawalls, docks and cypress trees. I adjusted later in the day and moved out a little, places where there was a noticeable drop and in front of the same areas.”

Fishing Lake Harris, he opted for a 3/8- and 1/2-ounce white swim jig paired with a 3-inch Bass Pro Shops Speed Shad swimbait for the first two periods of each day.

“It was a small, compact deal, not a big profile,” DeFoe said. “Later in the day, the Rapala OG (Ott’s Garage) Slim 06 crankbait was a big deal. I was making repetitive casts to the same places and the retrieve speed was key for both baits; a fast retrieve was better.”

Sticking primarily with a flipping and pitching approach, Bobby Lane secured his second straight second-place finish on the Bass Pro Tour and extended his lead in the Angler of the Year points race.

“I caught almost everything on a Berkley PowerBait The General or Berkley PowerBait Power Hawg in black and blue or Junebug,” Lane said. “I was targeting outside Kissimmee grass all day, every day. This time of year when the water is 80-degrees, they like to set up on the outside edge.”

He rigged his plastics on a 4/0 Berkley Fusion19 flipping hook and rounded out the package with a 1/2-ounce Flat Out Tungsten weight. The handful of other bass he caught this week came on a white spinnerbait with white blades that he purchased at a tackle shop during the recent Tackle Warehouse Pro Circuit event on Lake Eufaula.

Improving by one place on his fourth-place finish from the last event on Lake Travis, Brent Chapman stuck with his strengths and covered water with a vibrating jig in water less than 3 feet deep.

“I couldn’t believe how shallow the fish were during practice,” Chapman said. “I stayed shallow and covered water all week. It could have been Kissimmee grass, docks, lily pads, or whatever was shallow.”

Like DeFoe, he rode a strong morning bite with bass around the shad spawn. He utilized a chartreuse and white vibrating jig in both the 3/8 and 1/2-ounce sizes.

After a tough first day on Lake Griffin, Andy Montgomery pulled the plug and targeted Lake Harris on the second day of competition.

“It was so windy during all of practice and the first day of the tournament that I knew the main lake stuff wouldn’t be very pressured,” he said. “I caught all of my fish on grass, docks, seawalls and cypress trees. It was all target fishing.”

The bulk of his bass came on a 1/2-ounce white Strike King Thunder Cricket that he paired with a Strike King Blade Minnow. He followed it up at times with a blue glimmer spinnerbait and a redbug-colored Strike King Cut-R worm.

To finish fifth this week, Skeet Reese primarily relied on a green pumpkin vibrating jig with a Berkley PowerBait The Deal in the Skeet’s Green Money serving as the trailer, one of the critical lures in his win earlier this year on Lake Okeechobee. He also caught fish on a frog and a Lucky Craft 1.5 squarebill in Copper Green Shad.

“I was fishing canals because a lot of postspawn fish were still in there keying on bluegill,” Reese said. “They were dirt shallow and all shade related. Some were around cypress trees, docks, grass lines or anywhere with shade. You could see some of them cruising and you would cast to them and they would pounce on it.”

Each day, Michael Neal was forced to adjust his tactics based on the conditions. The first day of the event featured plenty of wind, and he caught fish in a canal with a jerkbait; the rest of the tournament days saw him fishing a drop-shot or Carolina rig.

“I was focusing in little turns and points in the canals, and I also had some open-water grass,” he said of his areas in Lake Beauclair. “I had to adjust each day based on the weather.”

His jerkbait of choice was the SPRO Mike McClelland McStick 110 in Dirty Bone. His soft plastic for both rigs was a Junebug Big Bite Baits Finesse Worm in the 8-inch size.

“That was my one-two approach this week and I targeted more of the shallow hydrilla,” Sprague said. “I was looking for whatever hydrilla that was left. There wasn’t much there, so when you found some in that 3 foot of water zone, it has bass relating to it.”

While hydrilla was his primary focus, he also caught some scorable bass fishing eelgrass.

“I focused on the areas of it that were patchy and not as dense,” he added. “That’s where they were setting up better.”

The “ChatterBait king” dominated his Qualifying Round with the Z-Man Evergreen JackHammer paired with a Yamamoto Zako trailer. As conditions changed, he adapted by going to the Stealth Blade version of the bait along with a soon-to-be-released Evergreen Grass Ripper Swim Jig with the Zako Paddle Tail.

“One of the biggest keys this week was the area,” Hite said. “It was a massive hydrilla field that was three or four hundred yards long. It was the only place I found in the whole chain that had the nice crisp hydrilla.”

Hite described his area on Lake Griffin as hydrilla in 6 to 7 feet of water, but added that the right vegetation height was crucial.

“The grass was topped out in some places, but all of my bigger bites were around grass that was 3 or 4 feet tall,” he said. “I caught some of my biggest bass of the week on the final day, just slow rolling that swim jig around that depth.”

Scoring his second Top 10 of the season, Gerald Spohrer began the event with a green pumpkin vibrating jig and squarebill before switching tactics the second day of the event.

“I had to find new fish the second day of competition and went to an area in the middle of Lake Griffin with hydrilla,” he said. “I focused on the outside edge of it in 7 feet of water and the hydrilla was 5 or 6 feet tall.”

He chose a white vibrating jig and a SPRO Aruku Shad lipless crankbait in both the 65 and 75 sizes in a shiner-imitating color to catch his fish.

“I was fishing the Aruku Shad on 40-pound Seaguar Smackdown braid with a soft rod and ripping it through the grass,” Spohrer said. “It was so crisp that you could snatch it out with braid if you snapped it. That was the most efficient way I found to cover water.”

Greg Vinson had two primary locations: a canal system and an offshore grass flat. Both of his key areas were in Lake Griffin.

“I started there in practice and didn’t want to spread myself too thin,” he said. “The canal had nice, clean hydrilla and deeper water. The offshore area had green grass scattered in 5 to 6 feet of water.”

“The FishHead Spin is a unique one for Florida, but I caught a bunch of my fish on it, including my biggest one this week,” Vinson said. “It was an obvious place in the back of a canal and the fish were schooling. I think the smaller profile helped with all of the pressure those fish see.”