TOP 10 BAITS: Here’s How Jordan Lee and the Final Field Caught ‘Em on the Kissimmee Chain 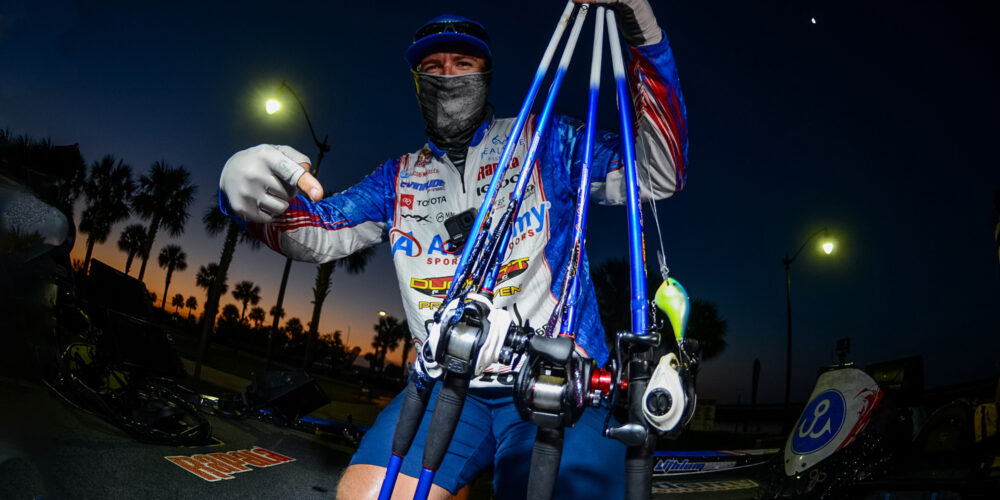 Jacob Wheeler and the rest of the Top 10 anglers used a wide variety of baits to catch fish on the Kissimmee Chain. Photo by Garrick Dixon
June 15, 2020 • Dave Landahl • Bass Pro Tour

KISSIMMEE, Fla. – Heavy Hitters on the Kissimmee Chain of Lakes in Florida demonstrated the variety of methods available to catch bass in what many anglers previously considered a one- or two-dimensional, “Florida-staples-only” time frame.

The world witnessed the Bass Pro Tour pros fishing everything from extreme shallows in narrow canals, to fishing hard bottom areas by boat locks, to Skeet Reese and Adrian Avena fishing in what looked more like Disney World’s Jungle Cruise than the open waters of the Kissimmee Chain.

Here’s how the Top 10 caught them:

Add a 6-inch swimbait with a belly hook and a white hand-tied hair jig, and you have Lee’s winning arsenal.

“A big key for me was to change out the treble hooks on the crankbait,” Lee said. “I replaced the hooks with No. 2 Berkley Fusion Round Bend Hooks. I’ve been a big fan of that hook style for a long time. I hardly lost anything on a crankbait all week. Switching out those hooks was a big deal. Normally a lot of fish jump off on crankbaits, but those hooks helped me land a lot of key fish all week.

“Working the worm right in the middle of brush and working it real slow was another big factor. Early in the week, I caught several 3- to 5-pound bass doing that.”

One “off-the-wall” lure (for Florida, anyway) was worth a hundred grand for Lee.

“I threw a hand-tied hair jig on the final day,” Lee confirmed. “I fished it on 12-pound Berkley 100% Fluorocarbon. The lighter line is important to let the bait swim, but it’s really light for the conditions I was fishing. It’s a testament to how good that line is. I only caught one bass on that jig. It happened to be the big bass of the day and worth $100,000. One lucky bite trying something different.”

Thrift stuck with three lures all week at Heavy Hitters. His lineup included a Damiki BTC 60 crankbait in the mossback color, a white swim jig with a white boot tail swimbait trailer, and an 11-inch, plum-colored Damiki Mega Miki worm that he Texas-rigged with a 1/4-ounce weight and a 5/0 Berkley Fusion Offset Worm Hook.

“I’d say I fished 80 percent hydrilla and 20 percent brushpiles on Toho,” Thrift said. “I caught a pile of fish on the last day, including my two biggest fish, both 6-pounders. The last hour was really good, but only one scorable.”

Thrift used Fitzgerald Rods to catch all his fish, including his signature squarebill rod while cranking.

Rose stuck with soft plastics throughout Heavy Hitters: Strike King Perfect Plastics Finesse Worms in the 6.5-inch or 5-inch size, along with a Fat Baby Finesse Worm. His color choice was Junebug for the entire week.

Lucas had his greatest success fishing close to a lock that had current flow.

Lucas threw both of those on a 7-0 medium-heavy Abu Garcia Fantasista Premier rod and a Revo MGX 30 spinning reel loaded with 8-pound Berkley X5 Braid and a 10-pound Trilene 100% Fluorocarbon leader.

“I was targeting hard-bottom areas,” he said. “I tried to get away from the grass so I could focus on hard cover.”

Reese’s choice of rig to toss his squarebill was a 7-foot fiberglass crankbait rod and a Skeet Reese reel loaded with 100% Trilene Fluorocarbon. A Berkley Pit Boss in green pumpkin with a 1/4-ounce sinker and a 4/0 TroKar Pro V Bend Flipping Hook also caught fish for Reese.

“I was fishing current in a creek, so fishing anything that created a current break, which was mostly cypress trees, is where I caught them,” Reese said.

Birge primarily fished shallow canals where current was flowing from drainage pipes and other sources.

“I used a Yo-Zuri 3DB 1.5 Gizzard Shad crankbait in current-related places,” Birge said. “That’s the primary lure I used to get to the Championship Round.”

Connell’s approach utilized a pair of soft plastics: a black and blue Googan Baits Bandito Bug, and a Googan Baits soft jerkbait. Connell fished both around shell beds and other cover.

Avena fished a creek with current flowing off Lake Toho along with main lake, brushpiles and hydrilla flats in 5-to-8-feet of water.

“I used a squarebill crankbait in chartreuse with a black back and a 1/2-ounce weight on a Texas rig with a black and blue Berkley Pit Boss,” he said. “I also threw a Z-Man ChatterBait with 4.8 Berkley Power Swimmer, a 1/4-ounce slider head with Berkley Bottom Hopper in the Junebug color, and a Berkley Digger 8.5 crankbait fishing brush.”

Klein fished offshore grass and caught the majority of his scorable bass with a 1/2-ounce Berkley Warpig lipless crankbait in Purdy Shad color. According to the longtime Duckett pro, speed-reeling that bait was the key to his success.

“The whole key was fishing as far away from the boat as I could get, so I was making really long casts,” Klein said. “The big ones would hit the first four or five turns of the reel.”

“I used 20-pound Sufix Fluorocarbon fishing the crankbait,” said Wheeler. “I was fishing offshore hard spots and brushpiles on Kissimmee, anywhere from 5- to 10-feet deep. The heavy line for the crankbait was due to me fishing it fairly shallow at times and banging into hard cover and shallow brush.”

Wheeler used his own signature series rods from Duckett Fishing and a Duckett Paradigm high-speed reel.