TOP 10 BAITS: How They Caught ‘Em at Stage One Eufaula 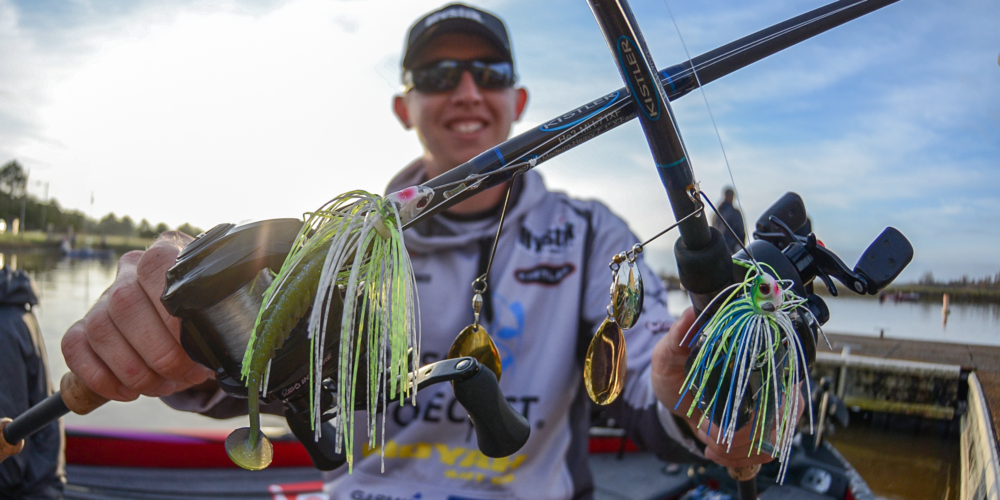 The Top 10 anglers figured out how to deal with these conditions, and Lake Eufaula turned into the big-bass fest everybody was hoping it would be.

Here’s what the Top 10 used to catch ‘em on Lake Eufaula:

Wheeler’s event-winning bait was the 1-ounce spinnerbait, as detailed previously in this story, but he employed two other primary baits to work his way through the Qualifying Rounds: a Rapala DT14 and DT16 in Caribbean Shad, and a 1/2-ounce black-and-blue jig with a Googan Baits Bandito Bug trailer (also black/blue).

The MLF rookie used a prototype Z-Man ChatterBait that he and the company have been working on for a few months: “This ChatterBait has a big blade and thumps like crazy,” says Thrift.

A new BTC-6 crankbait from Damiki in blue back and red craw colors, along with a 1/2-ounce black jig, were also part of his arsenal.

Thrift focused on points and hard-bottom spots in 3 to 5 feet of water, as well as docks.

The ChatterBait was fished on a Fitzgerald 7-foot 3-inch heavy-action Stunner rod with an Abu Garcia reel loaded with 20-pound P-Line Tactical Fluorocarbon. Crankbaits were fished on his signature series squarebill rod from Fitzgerald with an Abu Garcia Winch reel and 12-pound P-Line Tactical fluorocarbon. For the jig, Thrift used his signature series skipping rod with the same reel and line as the ChatterBait rod.

“Crankbaits were my deal,” said DeFoe. “I used a Rapala DT6 and DT10 and the new Slim (crankbait). I used shad and red craw colors.”

DeFoe fished brush in 5- to 10-foot depths on the lower end of the lake.

“Making repetitive casts to the same cover was crucial to my success,” DeFoe said.

One lure was the big winner for Jones: A 1/2-ounce blue/chartreuse Booyah Covert Spinnerbait with a double Indiana blade and a 3-inch YUM Pulse for a trailer.

Jones ran all over the south end of the lake, hitting pockets and creeks. The top cover was shallow grass and shallow docks with brush under them.

Connell used two baits to crack the Top 10. First was a vibrating jig with a Googan Baits 3.8-inch Saucy Swimmer on the back, cut down to make it smaller (the key color was white and chartreuse). His secondary bait was a 3/8-ounce black/blue swim jig with a black/blue Googan Baits Krackin’ Craw.

“Biggest key for me was fishing the first quarter of a creek,” Connell said. “I caught none in the back of the creeks all week long. I dialed into a zone and fished anything hard: wood or dock poles were productive.”

“Every scorable bass for me was on a 3/8-ounce bladed jig,” Chapman reported. “Either white or black-and-blue with a matching swimbait trailer. I used a KastKing Speed Demon 7-foot-3 chatterbait rod and a KastKing 6.4:1 Bassinator reel spooled with 20-pound Gamma Edge fluorocarbon.”

Pads, pad stems, or whatever shallow cover was available in the mid-lake area were Chapman’s targets throughout the week.

Hite used an EverGreen Flat Force crankbait in Cold Shad on the first two days when water was higher and cooler. He fished it in 3 to 7 feet of water next to deeper gator grass. His rod and reel combo was a Daiwa Tatula SB 6.3:1 reel and an EverGreen International 7-foot-1 medium rod and 10-pound Sunline FC Sniper fluorocarbon line.

After the water dropped, Hite fished a 1/2-ounce white Z-Man ChatterBait Jack Hammer with a silver blade, with a white Yamamoto Zako trailer.

Gator grass and pad stem edges were his prime cover, along with a little action in the reeds. A Daiwa Steez A 6.3:1 along with his signature EverGreen Combat Stick heavy action glass rod and 20-pound Sunline fluorocarbon was the ticket for fishing the Jack Hammer.

Lee used a 1/2-ounce double Colorado blade spinnerbait with an orange kicker blade and a 4-inch pearl-colored Berkley grub as a trailer to get him to the Knockout Round.

“I was throwing at hard stuff, a boat ramp, just junk fishing,” Lee said. “For the Knockout Round and final day, I ran up the river to a flooded pond and fished lily pads and a little grass out in the middle, in around 2 to 3 feet of water. They were just giants there during the Knockout Round, I weighed 6 bass for 36 pounds on that day.”

Lee’s bait for the bruisers was an orange ChatterBait Jack Hammer with a green pumpkin 4-inch Berkley Chigger Craw that he dyed the tail orange. He fished it on a 7-foot-5 Abu Garcia Winch prototype rod and a Revo Premier 7.3:1 reel loaded with 17-pound Berkley 100% Fluorocarbon.

Avena fished a 1-ounce Ledgebuster spinnerbait with a 4.8 Berkley Power Swimmer. The color combo was white and chartreuse.

The “Jersey Boy” used a 7-foot-3 Abu Garcia Fantasista rod and a 6.6:1 Revo STX reel and 20-pound Berkley 100% Fluorocarbon to cast his spinnerbait through brushpiles in 8 to 14 feet of water.