TOP 10 BAITS: How They Caught Smallies on Sturgeon Bay 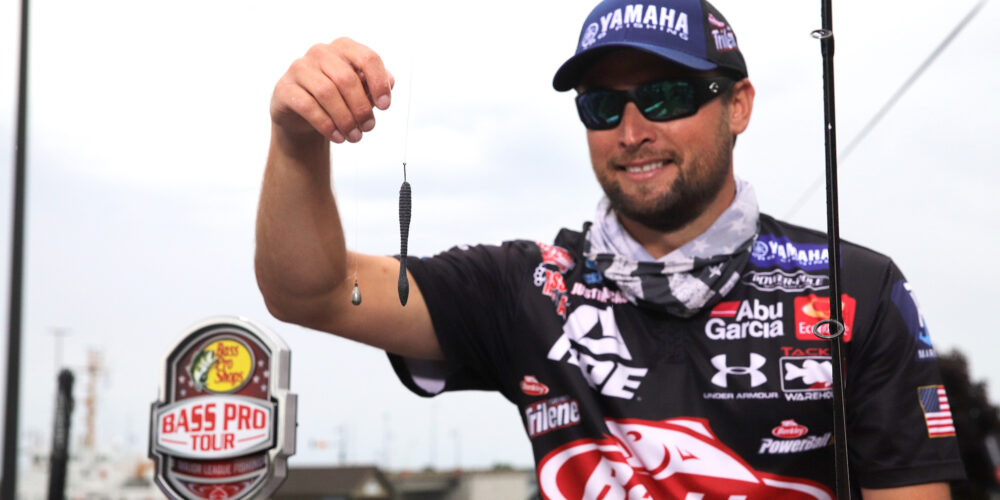 STURGEON BAY, Wis. – Change can be a good thing. In the case of the MLF Bass Pro Tour Sturgeon Bay event, it was amazingly good.

The need to switch the tournament to Sturgeon Bay with a very short lead time sure didn’t have a negative impact on the anglers. The winner of Stage Five, Justin Lucas, weighed over 300 pounds of Great Lakes smallmouth over the three days he competed. Several anglers in the field pulled in hundreds of pounds of Wisconsin smallies as well.

Here’s what the Top 10 used to get the job done:

Lucas fished a drop-shot rig with a Berkley PowerBait MaxScent Flat Worm in a variety of colors. On the final day, Lucas caught all of his fish using black Flat Worms.

His setup consisted of Abu Garcia reels and 7-foot medium action Abu Garcia Fantasista rods. The reels were spooled with 8-pound Berkley X5 Braid in the Crystal color and an 8-pound Berkley Trilene 100% Fluorocarbon leader. He tied that to a Number 2 drop-shot hook and used a 3/8-ounce weight.

Lucas fished isolated grass patches and a couple of small rocky points in deeper water outside an expansive spawning flat, anywhere from 12 to 20 feet deep, with deeper water being the key to his success during the Championship round.

Daniels fished a Ned rig with a Z-Man TRD in both green pumpkin and Green Pumpkin Goby, and a 4-inch Z-Man Finesse WormZ on a drop shot.

He fished offshore shoals where there were groups of fish roaming around. Not huge schools, but pods of bass.

He was targeting areas around Sister Island where bass were actively feeding on bait, and targeting larger cover, since single rocks would only hold a fish or two.

“A big key to my success was using my Garmin Livescope,” says Bertrand. “I used it to find the structure with baitfish.”

Lee used a drop-shot with a size 1 Berkley Fusion hook, a 3/8-ounce tungsten teardrop weight, and a Berkley Flat Worm. Color wasn’t important to him.

“I must’ve gone through 40 or 50 bags of Berkley Flat Worms,” Lee said. “Black, green pumpkin, smoke and purple, color didn’t really matter. There were massive schools of bass. I’ve never experienced anything like it. They’d just move every day. One day they’re in shallows around 6 feet deep, the next day they’re in deeper water up to 20 feet down.

“When they were up shallow one day, the wind pushed a giant school up shallow. I could throw the drop-shot in any direction and catch them. You just had to keep moving until you found them. I’ve never seen anything like it.”

“A drop-shot and tube were my weapons of choice, imagine that on a smallmouth fishery,” Jones joked. “The key for me was my Garmin Livescope. I fished in 8 to 15 feet of water and saw every fish I threw at. Every day, my fish moved. I had to catch them in totally different areas. One spot I went back to and saw nothing on the Livescope, but fished for 30 minutes and caught nothing. I’m now learning to trust the Livescope more each day.”

Jones focused on transition spots of spawning areas. A mix of rock, sand, and grass were what made his spots work.

“Another important thing for me was my Kistler Rods,” says Jones. “The older I get, the more I appreciate how really light, sensitive, and strong these rods are. It’s the finest rod on the market, in my opinion.”

Jones spooled his reels with 15-pound braid and 8-pound fluorocarbon for both the drop-shot and the tube.

A Zoom Beatdown in green pumpkin fished on a drop-shot or Ned rig produced all of Morgan’s bass. He fished in 10-to 17-foot depths.

“I kept looking for them until I found ‘em,” Morgan said.

Ike used a one-two punch of a drop-shot and a Ned rig. He used Berkley PowerBait MaxScent Flat Worm in the brown back color for the drop-shot and a black 4-inch Berkley General with a piece bitten off for his Ned rig.

“The brown back color is one of the best goby imitators I’ve ever seen,” said Iaconelli.”It’s a green pumpkin flake top and a pearl bottom, looks like a goby.”

His rigs included a 6-foot, 10-inch medium-light Ike Finesse Rod with a size 20 Abu reel spooled with 10-pound Berkley X5 Braid and a 20- to 30-foot leader of 6-pound Berkley 100% Fluorocarbon for the drop-shot and the same setup except for a 7-4 rod for the Ned rig.

Drop-shot rigs were either 3/16- or 1/4-ounce weight, depending on the wind, and a Number 1 VMC Ike Approved drop-shot hook (heavier weight when there was more wind). His Ned rig jig was 1/8- or 3/16-ounce, depending again on the wind strength.

“This was as simple as I’ve ever kept it,” Iaconelli said. “I can’t remember the last time I had only four rods on the deck. Two drop-shots and two Ned rigs. The only reason for two of each was in case the line tangled or got frayed by zebra mussels. The shorter rod for drop-shot was so I’d work the bait slower. It’s an old Larry Nixon theory. The longer rod for the Ned rig was so I could make longer casts in the shallows and not get up on the fish.”

Shallower flats with drop-offs from 4-to 8-feet deep with scattered rocks, sand and grass were where Roy had his success.

He utilized his Lowrance C Maps+ to find the flats and what to target on the sloping points and flats with rock, and spawning areas in 6 foot or less of water.

“I fished for bass in spawning areas and some cruisers as well,” he said.