TOP 10 BAITS & PATTERNS: How the Bass Pro Tour’s Best Caught ’em at Lake of the Ozarks 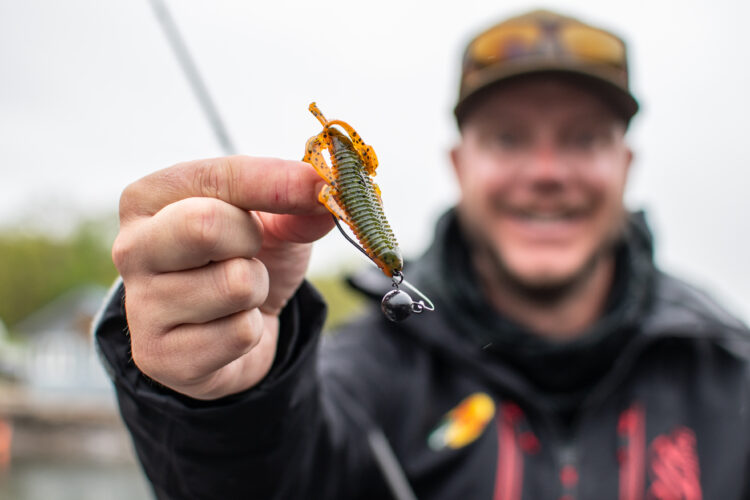 OSAGE BEACH, Mo. – Sight fishing was a common technique on Lake of the Ozarks during the Bass Boat Technologies Stage Four Presented by Bass Cat, but there were plenty of other ways to catch bass. While fishing for bedding bass was at least a part of the plan for everyone in the tournament, blind casting to bedding areas and covering water with moving baits made up a significant portion of the top finishers’ patterns.

Alabama pro Jesse Wiggins secured his first tour-level victory by fishing his strengths: casting a shaky-head worm around docks, just like he does back home on Lewis Smith Lake.

Dock cables, walkways, and corners of docks were his three targets all week and he fished them quickly and efficiently.

“Ninety percent of (the fish I hooked) would hit it on the fall, so I would cast, shake it a few times, reel it back in, and go to the next one,” he said.

Wiggins fished a green pumpkin Jackall 6.8 Flick Shake Worm that he shortened to roughly 5 inches long. His jighead of choice was a 3/16-ounce model poured by his brother.

Acknowledged as one of the best in the world at fishing for spawning bass, Dean Rojas was able to fish his strengths to make it to the Knockout Round before switching gears on the final day.

“My main pattern to start the event was bed fishing and once the weather started changing, I knew it was going away,” Rojas admitted. “I abandoned that and started throwing a vibrating jig in 6 to 10 feet of water right on the bottom. If I saw a fish spawning, I would fish for it, but covering water was the key.”

For sight fishing, he used a sunfish Big Bite Baits Dean Rojas WarMouth and a shad-colored Real Deal Shad. His vibrating jig was a ½-ounce brown and red version that he paired with a bluegill pattern Big Bite Baits Kamikaze Swimon trailer.

Tennessee pro Wesley Strader stuck with the same plan all week: sight fishing and casting a jig around docks.

“It was pretty simple – I did some sight fishing with a motor oil Zoom Zlinky that I cut down to fish on a Ned rig with a TroKar Pro-V Finesse Tungstun Jighead,” he said. “I also fished a green pumpkin 3/8-ounce prototype Epic Baits compact finesse jig with a Zoom Ultravibe Speed Craw trailer. I dyed the tips of the trailer with a chartreuse Zoom dye marker and added some crawfish All In Tackle Jar Jelly scent to the jig and my Ned rig.”

The primary area for Strader was Possum Hollow, near the Gravois arm.

“It was mainly the 2- to 6-foot depth range around docks,” he said.

As he does everywhere he goes, Stephen Browning found a way to fish his strengths and utilize a Z-Man ChatterBait Evergreen Jack Hammer in stained water.

“I was making the run to Big Buffalo and Little Buffalo, but all of the rain had blown it out the last day and destroyed my area,” Browning said.

Browning used a fire craw ChatterBait with a matching Z-Man DieZel Minnowz trailer and mixed in a 1/2-ounce coleslaw-colored spinnerbait with Indiana blades and a black-and-red tube bait.

“I was slow-rolling the ChatterBait and spinnerbait on deeper rock and would pitch the tube to any wood I saw in the water,” he added.

The reigning Bally Bet Angler of the Year took control of that race with his fourth straight Top-10 finish to start the season and did it almost exclusively by sight fishing.

“This week, it was about using my eyes more than anything,” Wheeler confirmed. “I fished the mid-lake section and focused on deeper spawning bass. Luckily there were a couple of windows during practice where you could see the deeper fish that others weren’t targeting as much.”

Wheeler caught a handful of bass with a swimbait, but sight fishing with creature baits did the bulk of his work.

“Sight fishing is all about using multiple baits to get them fired up, and I rotated between a Googan Baits Bandito Bug Jr. and Zoom Baby Brush Hog in natural colors like green pumpkin and watermelon and a bright-white bait,” Wheeler said.

Texas pro Kelly Jordon is known for his sight-fishing skills and that was the primary method that allowed him to advance to the Championship Round. Jordon focused his time on the Gravois Mills area, which had cleaner water than much of the rest of the lake.

“I had some beds close to the ramp, but down the lake had cleaner water and you could still see spawning fish, even with the rain and dirtier water that came in,” he said. “I did a lot of looking and stuck with the horse that brought me, even on the final day, because I was expecting more fish to come up.”

Jordon’s bait of choice was a Lake Fork Trophy Lures craw that is no longer in production, a 2.5-inch crawfish with a gray back and orange belly.

“It’s small and easy for the fish to eat,” he said. “I also caught some pitching it around between docks while looking for beds.”

Sight fishing was out of the question for Andy Morgan – the area he chose was stained, so he opted for pitching a jig and casting a Strike King Thunder Cricket vibrating jig.

“I saw maybe two spawning bass all week, it was too dirty to see them,” he shared. “Ninety percent of my fish came pitching docks, and I would throw the Thunder Cricket on the long stretches between docks. Each day was a little different, some days they were deeper and some days they were up in the dirt. It was anywhere from 2 to 8 feet of water depending on the dock and the day.”

Arkansas pro Mark Rose relied on a finesse jig close to the tournament takeoff to make it to the final day.

“I didn’t go far and stayed in the Grand Glaize arm 95 percent of the tournament,” Rose said. “I was positioning my boat in around 12 feet of water and casting to 5 or 6 feet and working it back out. There were not a lot of docks where I was fishing; it was mainly steep banks, chunk rock, and some flat points.”

His jig of choice was a ¼-ounce Strike King Finesse Football Head paired with a Strike King Baby Rage Bug, both in crawfish patterns.

While many anglers targeted spawning bass, Jonathon VanDam made it work with pre and postspawn bass.

“Sight fishing isn’t my game, to be honest,” he said. “I got enough good bites during practice targeting tapering gravel banks where fish were staging and was able to expand on that during the tournament. I was able to catch enough to advance without sight fishing, so that was nice.”

VanDam targeted depths of 3 to 5 feet at the mouths of pockets and on secondary points with a ¾-ounce swing head jig with a Googan Baits Bandito Bug in Alabama craw.

“That color has some orange on it and that seemed to help get more bites,” he added.

Missouri pro Jeremy Lawyer came into the event as one of the favorites. He used his local knowledge to advance to his first Championship Round since joining the Bass Pro Tour this season.

His success came fishing a Freedom Tackle Structure Jig in the governor color with a Zoom Z-Craw Jr. in tilapia as the trailer and a wacky-rigged Zoom Magnum Swamp Crawler worm in both watermelon candy and green pumpkin.

“It was all docks and the first day I ran up to the Hurricane Deck bridge area and the second day it was down around the 2-mile marker, the final day I fished both sections of the lake targeting spawning pockets,” Lawyer said. “I inserted a nail weight into the Swamp Crawler to get it to fall a little faster, and I added BaitFuel to it and my jigs. That was key this week.”