TOP 10 BAITS & PATTERNS: How the Best Caught ‘em At REDREST 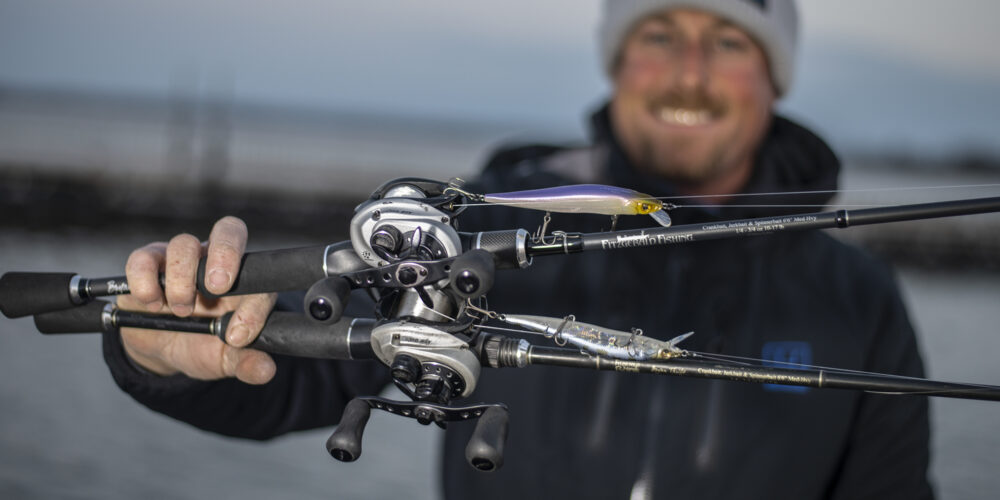 GROVE, Okla. – Moving baits were the prominent trend among the top finishers at REDCREST 2022 Presented by Costa. Grand Lake’s bass are in a definite prespawn pattern and the top anglers leaned heavily on shallow cranking and jerkbaits to make their way through the tournament.

Forward-facing sonar was also vital to some and significantly impacted the catch totals this week – in the end, however, old-school shallow water fishing accounted for the No. 1 spot on SCORECTACKER® and the REDCREST trophy for Florida pro Bobby Lane.

Lane rode the crankbait bite all week long, targeting classic prespawn locations before switching to a jig midway through the final day.

“It was all about the Berkley Frittside 5 for me this week in the HD brown color,” Lane said. “All I did was fish the backs of creeks and focus on where the last rock was. The fish are in transition and trying to work their way back to the back to spawn.”

That’s what got him to the final day, but pitching a jig is what won it for him.

“The fish made a transition late this afternoon and got super shallow,” he said. “I knew that and made every single one count and started flipping a green pumpkin jig with a matching Berkley PowerBait Meaty Chunk in the smaller size and added some chartreuse dye to the tips of the trailer.”

Lane shifted locations throughout the event, starting in the river not far from Wolf Creek ramp and shifting toward Drowning and Horse Creek as the tournament progressed.

“The river got completely flooded, and I had to move to cleaner and warmer water down the lake,” he said. “The shallow bite got better every day out there.”

Clausen was forced to search out new water each day of the event, but shallow crankbaits were his primary tool everywhere he went. He stuck with various flat-sided crankbaits, including the Jackall Bling 55 in natural crawfish colors.

“I never caught one deeper than 4 feet of water,” Clausen said. “I fished some main-lake pockets, but Horse Creek was my primary area. I focused on flatter banks close to deep water the first three fishing days and junked around today. I caught some on docks, riprap, and standing timber.”

Wheeler relied on a jerkbait for most of the tournament while watching his forward-facing sonar, and caught some shallow fish with a crankbait when he was in dirtier water.

“It was mostly the jerkbait, and I used four different jerkbaits, including the Rapala Shadow Rap Deep,” Wheeler said. “Some of the fish were out roaming and chasing bait, but most were on the isolated cover and hard places. The key depth was 6 to 12 feet, but the suspended fish were out deeper in the abyss.”

Connell is one of the best with a jerkbait while watching his Lowrance ActiveTarget and that’s precisely how he caught them all week at REDCREST.

“I was concentrating on the shallow brush in 5 to 10 feet of water,” he said. “It was all staging fish inside of pockets and the first third of each pocket was the best. The best places were on transition banks and flats leading into spawning areas.”

Connell focused on the middle and lower sections of the lake and utilized various jerkbaits depending on the depth and water color.

“I had four different jerkbaits rigged up: three regular diving baits and a deeper one,” he said. “I used the translucent baits in the clearest water and a chartreuse shad bait in the dirtier stuff.”

Starting each day right next to the takeoff site, Montgomery was able to catch enough to advance without a definitive plan.

“It was a little scary each morning because I had no clue what I would do,” he admitted. “That can be a good thing because you don’t have any preconceived notions, and I did find a little pattern in the Knockout Round targeting shallow wood.”

Montgomery caught fish on a Strike King Series 3 in the rootbeer color and a white spinnerbait, but the jig did most of his heavy lifting.

“I used my Strike King Tour Grade Skipping Jig, took the skirt off, and added a round rubber skirt,” Montgomery said. “It’s brown with orange, and I like the rubber in cold water. My trailer was a green pumpkin Midsize Strike King Rage Bug.”

“I was running a bunch of places that I know the fish should be going to spawn and stayed midlake because I have the most confidence in that part of the lake,” he said. “I tried to play the water conditions and that was the biggest hiccup, trying to stay ahead of the dirty water from all of the mud coming down the lake. It was a curveball for me to try to stay in the cleaner water.”

A heavy favorite to win in his home state, Evers had a great showing at REDCREST with the help of a jerkbait and Lowrance ActiveTarget. He focused on the middle section of the lake and utilized a Berkley Stunna 112 jerkbait in stealth shad and Table Rock shad.

“It was a late winter pattern and worked for fish that were staging before they spawn,” Evers said. “I was fishing offshore brushpiles in different depths. The shallow ones were 6 to 7 feet and some were a little deeper out in 15 feet.”

While Lee caught some fish shallow with a jig, the jerkbait was his biggest helper on Grand Lake. Locating offshore brushpiles the second day allowed him to turn his event around and make it to the final day.

“I was fishing flats and offshore brush with a jerkbait,” Lee said. “I couldn’t get bit on the bottom because the fish were all suspended over the brush, and I watched them eat on my Lowrance ActiveTarget.”

Lee focused on the Horse Creek area and the magic depth was between 5 and 8 feet. He used a mixture of different jerkbaits, including the Berkley Stunna in the Hankie Pankie color.

Thrift kept things simple on Grand Lake and relied heavily on a jerkbait while targeting bass feeding on baitfish.

“It’s a perfect wintertime and early spring scenario when you can find baitfish,” Thrift said. “All of my fish came with a jerkbait running the baitfish pattern. I saw balls of bait on my electronics and caught fish around those. They were thrashing and schooling on bait when the tournament started, but I had to look much harder as the tournament went on because the water level rose and scattered the baitfish.”

Thrift used different jerkbait in various shad-imitating colors and focused on the lower end of the lake. He chose white and opaque colors for more stained water and translucent hues in the cleanest water.

“The water down there was a little clearer and more conducive to fishing a jerkbait,” he said. “Some of my fish were right on the bank and some were suspended over 40 feet of water. The biggest key was being in an area with a lot of bait.”

“I stayed shallow the first day, cranking a crawfish color SPRO Little John MD, but that was on the end of a warming trend and the bite was going away,” Neal said. “The water got colder, so I changed to targeting suspended bait runners with my forward-facing sonar.”

As he did at Stage Three on Smith Lake, Neal used a Big Bite Baits Swimmer Head with a 3.75-inch Big Bite Baits Jointed Jerk Minnow in baitfish patterns.

“I used a 1/8 to 3/8-ounce head depending on depth,” Neal said. “It was all on the lower end of the lake because the water was cleaner. All the fish were in 10 to 25 feet of water and most of them were suspended 5 and 15 feet below the surface.”