Top 10 Baits & Patterns: How They Caught ’em in the Heavy Hitters Championship Round 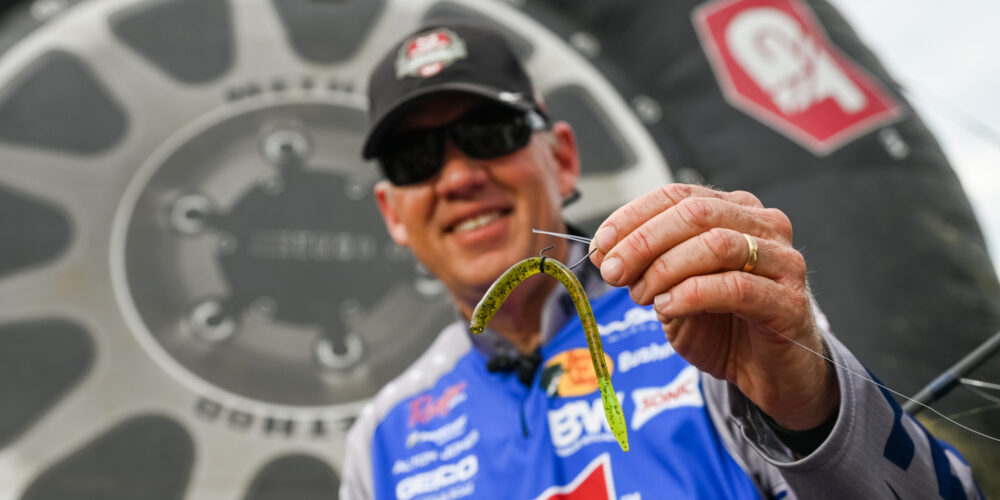 RALEIGH, N.C. – Championship day at General Tire Heavy Hitters Presented by Bass Pro Shops brought the final 10 anglers to Shearon Harris Reservoir right in the middle of the annual spawning ritual for the lake’s largemouth. Not surprisingly, sight fishing proved to be the winning pattern for Alton Jones, while the rest of the field mixed it up with various techniques.

A noted sight-fishing expert, Jones secured the victory while looking at all 12 of the bass he caught during the Championship Round. The majority of his catches during the Knockout Round also came by fishing for spawning fish.

“I caught some (in the Knockout Round) with a Zoom Magnum Trick Worm with a 3/32-ounce weight,” Jones said. “(In the final round) every fish was on the tube. It was easier to fish around the cover, and I was casting over little pieces of cover and working the bait up and down to work the bait and keep it in one place.”

Jones relied on a Canyon Plastics 3 3/4-inch Original Gitzit Tube in #00B (Brown Melon/Black and Purple Glitter) with a 3/16-ounce Reins Tungsten weight and rigged on a 4/0 Owner 4X Jungle Flipping Hook.

During the Knockout Round, Sprague caught most of his fish on a black Strike King KVD Toad Buzz Buzzbait. During the Championship Round, he spent his time sight fishing and blind casting to likely spawning areas. The latter is how he hooked the $100,000 Berkley Big Bass prize for a 5-3 largemouth.

“I would cast a weightless Strike King Ocho in Black Blue Swirl and that’s how I caught two of them today,” he said after the final round. “That’s what the big one ate. I cast it out and just started seeing my line swimming away.”

“They were really aggressive to bream swimming around, so I went with a natural color,” he said. “I targeted the smaller pockets on the main lake that a lot of guys weren’t targeting, and I think concentrating on those areas helped.”

Wheeler struck big with a $50,000 Berkley Big Bass prize for his 7-8 during the Knockout Round. That big money bass came by sight fishing, and that was his primary approach both days on Shearon Harris.

“I caught some on a white swim jig and some flipping to fish I didn’t see,” he said. “I also caught some wacky rigging a Googan Baits Lunker Log. But, most of them came by sight fishing with a pearl Googan Baits Bandito Bug in the smaller 3.3 size.”

Wheeler fished the Bandito Bug with a 3/8-ounce VMC Tungsten Worm Weight with a 4/0 VMC Ike Approved Heavy Duty Flippin’ Hook. One key, according to Wheeler, was the white bait he was using for the spawning bass.

“Normally, I like natural colors for sight fishing,” he said. “It seemed like they reacted better to white these last two days.”

Neal used a one-two punch of throwing a frog in the morning and switching to a wacky rig later in the day.

“It seemed like they would bite that frog better in the morning and once the sun came out, I had to switch to the worm,” Neal said. “I was fishing a SPRO Bronzeye Frog in the Midnight Walker color. For the wacky rig, it was a green pumpkin or baby bass 5-inch Big Bite Baits Trick Stick on a Size 1 Gamakatsu G-Finesse Stinger Weedless Wacky Hook.”

While Neal has a hunch the fish were spawning, he wasn’t targeting fish he could see before making a cast.

“I’m sure they were all spawners of guarding fry,” Neal said. “I was just targeting the shallow bank grass and places they spawn. I wasn’t specifically looking at them.”

After winning his group, Thrift skipped straight to the Championship Round, where he spent his day sight fishing on Shearon Harris.

“It was pretty much all sight fishing, but I did catch one flipping a little piece of grass during the first period,” said Thrift. “All the rest were fish I saw, and I caught them with a 5-inch Damiki Stinger in baby bass on a 3/0 Berkley Fusion19 Weedless Wide Gap hook.”

Thrift believes his stick bait does so well this time of year because of the slower fall rate.

“It falls about half of the rate that most stickbaits do,” he said. “That makes a big difference when you are fishing shallow for spawning fish.”

Morgan had the most weight during the Knockout Round and utilized a similar approach during the final day. He flipped cover and threw a Strike King Thunder Cricket vibrating jig.

“I was flipping wood, cattails, and whatever I could get around that bass might be spawning by,” he said. “I was throwing the Thunder Cricket to cover water. I stopped a few times to cast if I saw a spawning bass that was worth catching, but it wasn’t very clear where I was.”

The dirtier water was part of his game plan and he used that approach both days on Shearon Harris.

“I was in the backs of creeks in the dirtiest water I could find,” he added.

His Thunder Cricket was a 1/2-ounce model in chartreuse and white and he tipped it with a Zoom Z-Swim swimbait. He went with a green pumpkin Zoom Z-Craw rigged in a 5/0 hook with a 1/4-ounce Strike King Tour Grade Tungsten weight for flipping and pitching.

Lefebre mixed it up both days on Shearon Harris, splitting his time between fishing for spawning bass and throwing a white 13 Fishing Trash Panda frog.

He targeted an area just outside of the tournament takeoff around the line of reeds that bass were using to spawn.

“I caught some on the frog each day and several on the Yamamoto Senko and various Yamamoto plastics,” Lefebre said. “I was fishing a Texas rig for the plastics with light weights for the spawning bass. For the Senko, I used a 3/0 hook and 1/8-ounce FishOn Tungsten worm weight.”

Like Thrift, Shryock skipped straight to the Championship Round for winning his group. He didn’t fish Harris during the Knockout Round, so he approached it like his qualifying days.

“I fished it basically the same as I did at Jordan,” he said. “I pitched a green pumpkin Yamamoto Fat Ika with a 3/16 and 1/4-ounce weight. I was targeting places where I thought the fish were spawning.”

Shryock’s approach was to cover water quickly instead of spending time on individual fish while sight fishing.

“I saw some fish on beds but was trying to cover water faster,” he added. “I was intentionally trying to fish that way instead of spending all of my time looking.”

Ehrler used a one-two punch of fishing a frog and flipping either a Yamamoto Senko or creature bait during his two days on Harris.

“Two that I caught the last two days were on the frog,” Ehrler said. “The rest came by skipping a Senko or flipping a creature bait to the shoreline grass. I’m sure a lot of them were bed fish or just getting posted up to spawn, but I wasn’t sight fishing for them.”

Another key was utilizing light tungsten weights and adding some chartreuse to his plastics.

“I wanted a slower fall, so was using a 1/16-ounce weight on the wacky-rigged Senko and fished it on a Size 1 Gamakatsu G-Finesse Stinger Weedless Wacky Hook,” he said. “I kept it pretty basic with colors and used shades of green pumpkin with the tail dipped chartreuse to imitate bluegill.”

Monroe spent the bulk of his day fishing for a large spawning bass that almost surely would have won the $100,000 Berkley Big Bass for the day. He was able to hook the fish but never landed it. Later in the day, he switched things up and caught a 3-11.

To get to the Championship Round, he utilized a River2Sea Ish Monroe Phat Mat Daddy Frog in the Yellow Head color.