Top 10 is Ready to Rumble on Lake Chickamauga 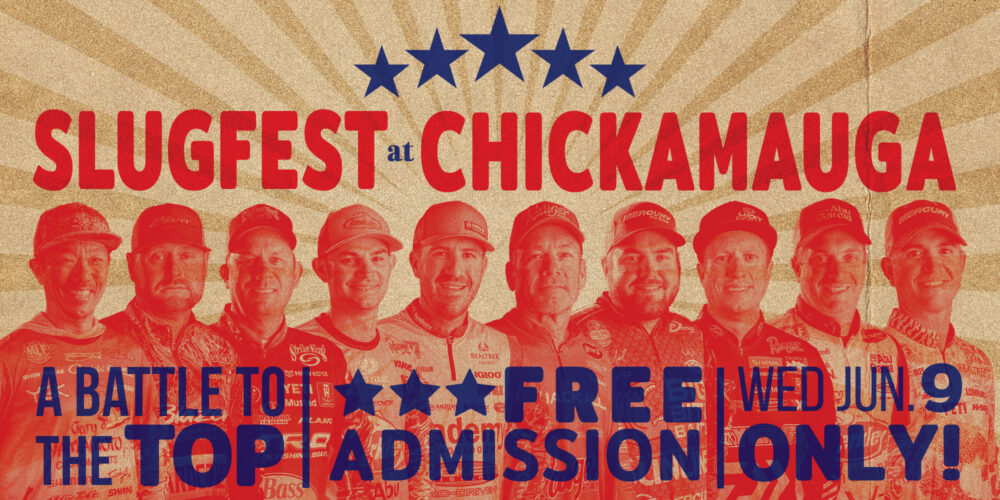 Wednesday's Championship Round on Lake Chickamauga should be a brawl of epic proportions.
June 9, 2021 • Joel Shangle • Bass Pro Tour

DAYTON, Tenn. – No matter which Buffer Brother’s pre-fight signature phrase you prefer – be it Michael’s iconic “Let’s get ready to rumbbllleeeee” or Bruce’s bombastic “It’s TIIIIIME!” to introduce UFC fights – they’re both pretty appropriate for what’s about to go down on Lake Chickamauga.

The Championship Round of the Bass Pro Tour Stage Four has all the trappings of a good old-fashioned donnybrook when Period 1 gets underway at 7 a.m. EST. The final 10 anglers will be fishing a Tennessee River impoundment that just feels like it’s simmering, waiting to explode for the right angler who hits the right current on the right school of largemouth at the right time.

Oh, Lake Chickamauga has been plenty darn good through five days of competition so far – the results say so – but the sluggish daytime releases of water from the dams on either end of the reservoir have kept Chick’s largemouth most at bay (with some notable exceptions. *cough Jason Lambert* *cough cough Shin Fukae*

That should change today: Tennessee Valley Authority’s release schedule for June 9 ramps from daytime flows around 13,500 cubic feet per second (cfs) in the qualifying and Knockout rounds to over 30,000 cfs on Wednesday.

And it’s the right field of anglers to take advantage of it: among them are three Forrest Wood Cup trophies, 10 Angler of the Year awards, one All-American, a Stren Series championship and seven Bassmaster Classic titles.

Label Ashley and Browning the “wild cards” on Wednesday simply because they’ve played the bank (or near it) all week in a tournament that’s supposed to be won offshore: 21 of Ashley’s 26 scorable fish have come out of water 5 feet or shallower while Browning spent the entire week with some kind of jig in his hand (bladed/vibrating, skipping, flipping) in 10 feet of water or less.

Both Ehrler and Fukae are quickly labeled as finesse anglers, and neither of them will deny that they’re pretty darn comfortable with a Neko rig, drop-shot, shaky head, Ned rig or wacky rig on a spinning rod. But the “finesse” game as it’s gradually developed in the Major League Fishing format – where shaking small baits on light line on fisheries like Chickamauga can produce 6- and 7-pounders, plus the numbers to keep you relevant on SCORETRACKER® – is not the same “finesse” game you’ll see on Lake Shasta or Smith Lake.

JT Kenney picked Gagliardi as his dark horse this week, even though the South Carolina pro’s resume doesn’t scream “ledge specialist!” Turns out that Kenney dug deeper than everybody else (and also fished against Gagliardi for nearly 20 years): Gagliardi has won on the Tennessee River (in 2004). Perhaps more relevant is his habit of catching key fish at critical times this season, including the 4 ½-pounder in the last hour of the Knockout Round that put him in the final.

It’s almost too easy to point to Neal and say “It’s only a matter of time before he wins one” because the Dayton local undoubtedly has several tour-level wins in his future. But how about right here, right now? Neal maneuvered through the early rounds of Stage Four with solid weights all three days, and no matter what the TVA does with water releases during Wednesday’s Championship Round, Neal will have multiple spots to cycle through. This might be Neal’s time to pick up that first “W.”

It sounds comical to call a guy who weighs 150 pounds soaking wet a “giant,” but in tournament-fishing parlance, the sleeping giant has awakened and his name is Jordan Lee. The defending Angler of the Year got off to a very un-Lee-like start in 2021, missing the cut in all three Bass Pro Tour regular-season events leading into Chickamauga and digging himself a hole for REDCREST 2022 qualification. But were any of you surprised to see Lee in the top five in Group B competition, and standing toe-to-toe with Kevin VanDam for the top spot in the Knockout Round? You shouldn’t have been, and you shouldn’t be surprised if he adds another Bass Pro Tour trophy to his collection after Wednesday.

If there’s one guy you don’t want to see fishing the same ledge as you in June on the Tennessee River, it’s Lambert. Doesn’t matter if it’s Pickwick, Kentucky Lake or Chickamauga, the chances are that you’ll catch a fish or two, and that Lambert will scour every single scorable bass off that ledge, and then move on and do the same at the next ledge. And the next. And the next.

You got the feeling that Wheeler was just toying with the field all week long on Chickamauga. He finished sixth in Group B competition but did it so quietly that you wondered if he was actually fishing Group A. The first period came and went in the Knockout Round with only one scorable bass next to Wheeler’s name … and then 11:01 a.m. struck, and Wheeler reminded everybody “I’m Jacob Wheeler, and this is Lake Chickamauga,” landing nine scorable bass for over 28 pounds in 33 minutes to make his 10th Championship Round in three years on the Bass Pro Tour.

As good as all the previous nine anglers are – and as much local knowledge and ledge-fishing prowess that exists in the championship field – VanDam has pocketed more winnings on the Tennessee River in his career than any of them. In a room full of 800-pound Tennessee River gorillas, VanDam is the 900-pounder: he claimed the Knockout Round doing what he loves to do the best (cranking) and has undoubtedly been licking his chops ever since the TVA released the dam schedule for Chickamauga’s Championship Round. The only major trophy that VanDam lacks in his sensational career is the Bass Pro Tour “Big Red” – today might be the day.