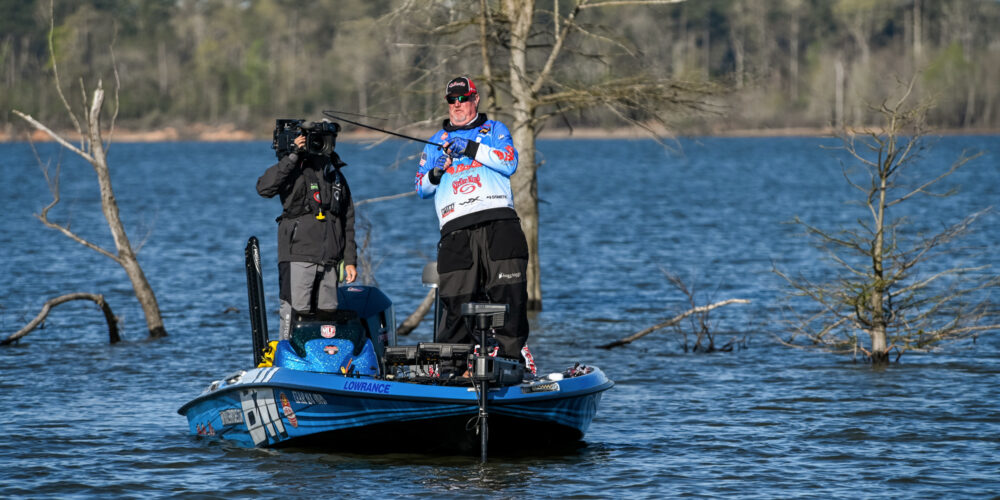 JASPER, Texas – The Championship Round at Sam Rayburn Reservoir for the Toro Stage One presented by Power-Pole was a fight to the finish. Several anglers were one scorable bass away from winning the event late into the day, and the final 10 caught fish on a host of different patterns fishing from one end of the lake to the other.

For much of championship afternoon, it looked like Luke Clausen might be a first-time Bass Pro Tour winner. After steady catches his first three days, he had his best day on the final day with nine bass for 27 pounds, 5 ounces.

Early in the week, he did most of his damage with a 3/8-ounce Evergreen Z-Man JackHammer ChatterBait with a Razor ShadZ trailer before transitioning to a Z-Man ZinkerZ soft stickbait.

“I used the Clearwater Shad and the Spot Remover (Jack Hammer) when the water was dirtier. I was skipping it around cypress trees and bushes,” Clausen said.

He focused on the middle section of the lake after beginning his tournament further north in the Angelina River.

“My bites for fish over 2 pounds diminished each day up the river,” Clausen said. “I got way more bites up there, but finding a scorable fish was a challenge. I came back to the mid-lake section during the Knockout Round and stayed in the same general area for the rest of the tournament.”

As the weather conditions changed, so did Clausen’s ChatterBait bite, so he switched to the ZinkerZ in green pumpkin (both on a wacky rig and Texas rig).

“I was fishing it around cypress trees and places where the fish were trying to make a bed,” Clausen said.

Louisiana’s Gerald Spohrer fished the same pattern and lure all week long. He skipped the Knockout Round after winning Group B’s Qualifying Rounds with the help of a homemade 3/8-ounce white swim jig with a matching Missile Baits Twin Turbo trailer.

“I focused on the north end of the lake, throwing the swim jig for the first two days,” Spohrer said. “It started to get pretty crowded out there today, so I came back down the river a little bit.”

After he sensed that his area was running dry, he called an audible.

“I ran some inconspicuous areas with isolated cypress trees and tried to swing for the fence,” Spohrer admitted. “That’s how I caught a few of my fish late in the day to make a run for it.”

Veteran pro Tommy Biffle switched it up from day to day when it came to lure selection, but targeted the same general locations on the upper end of Sam Rayburn.

“It was a YUM Dinger the first day and a spinnerbait the second day when it was cloudy,” Biffle said. “During the Knockout Round, I caught most of them on a smoke silver Gene Larew Biffle Bug with a 5/16-ounce weight. On the last day, it was the Biffle Bug and the spinnerbait.”

He keyed on two types of wood cover in around two feet of water but near deeper water.

“I don’t even know the name of the bushes, but they’re big and bushy trees,” Biffle said. “They seem to have taken over because it used to be a lot more buck brush and willows. I targeted those bushes and cypress trees that were close to the channel or close to deep water. That’s where the bigger fish seemed to be.”

After struggling the first day of competition with just two bass, Justin Lucas went on a tear during the second Qualifying Round, and then won the Knockout Round. He surpassed 30 pounds on both of those days on the strength of several quality bass, including a 7-14.

That big bass earned him Berkley Big Bass honors and gave him a much-needed clue for the rest of the week.

“That big one clued me into the swimbait deal,” said Lucas, who shared that he was fishing a 4.5-inch swimbait on a 3/8-ounce jighead. “I started focusing on flats with hydrilla in the middle section of the lake for prespawn bass. The first day I was catching a few on a floating worm for bass that were shallow and spawning.”

He also went finesse with a 6-inch finesse worm on a drop-shot with a ¼-ounce weight on those same flats with hydrilla present.

Mark Davis led his group after his first day of competition with the help of a Strike King Red Eye Shad, but the bite the rest of the week forced him to slow down.

“That bite went away, and I spent the rest of the week dragging, mostly,” Davis said. “I was fishing a Carolina rig with a Strike King Game Hawg in Candy Craw with a 3/4-ounce weight and a 3-foot leader.”

He fished several locations in the middle section of the lake, including the Veach Basin area and spots around the State Highway 147 bridge.

“I was targeting the inside edges of the grass,” Davis said. “Rayburn doesn’t have a lot of grass right now and my best places had grass that was about 3-feet tall with a clean edge on the shallow side. These are places the fish were using to spawn.”

Cliff Crochet enjoyed his best-ever finish on the Bass Pro Tour and did it mainly with one of his favorite techniques: fishing a frog.

“I started off the tournament in a pocket with some grass in it and caught some fish on an STH Spike stickbait and a Crusher Lures jig,” Crochet said. “Late in the first day, I caught a good one on a frog in scattered grass in a foot and a half of water and that clued me into what to do. That fish hit it hard and it was my first bigger fish in shallow water.”

After that, he kept the Snag Proof Wobbletron Frog in his hands for just about the rest of the tournament.

“I stuck with the frog pattern after that,” Crochet said. “I started skipping bushes with the frog and the best bushes had some green grass by them. Casting and skipping way back into it was a big deal.”

He targeted the northern section of the lake, but in hindsight wishes he would have changed what he was looking for from the start.

“If I could re-do it, I would have fished more banks with laydowns and grass instead of just focusing on the bushes, because that seemed to be where the most fish were,” Crochet admitted.

“I was mainly flipping bushes with a Strike King Zero stickbait in green pumpkin and watermelon red,” Sprague said. “That’s what I did all week long and targeted the middle section of the lake for spawning fish.”

Although he didn’t see the fish before pitching to them, he’s sure they were spawning bass.

“I looked for the isolated bushes in hard bottom areas they use to spawn,” Sprague said. “The isolated stuff was better than the thicker groups of trees. The thicker areas just diluted the fish and made them harder to target.”

Cliff Pace had a tough final day, with just two bass over 2 pounds. That was due to the slick, calm conditions on Rayburn during the Championship Round.

“I needed some weather,” Pace admitted. “One of the days where I caught them good was cloudy and the other was windy. Either one of those would have worked for me; it just couldn’t be flat calm like it was.”

Fishing a Jackall Rerange jerkbait in French Pearl and Black Label Tackle Wreck in Gizzard Shad Foil were his two primary weapons and the overcast and windy conditions were vital for both of those reaction baits.

“I never found a way to slow down and catch them,” Pace said. “I was fishing hydrilla lines on the outside of spawning bays and had a reaction bite going for postspawn fish. I think all but one of the fish I caught were postspawn by how they looked.”

Pace targeted the lower end of the lake and was the furthest south of any angler in the Championship Round.

Although Bobby Lane landed just one scorable bass on the final day, he had a good week with the help of a Berkley Frittside crankbait, a spinnerbait, and pitching shallow cover in the Deer Stand area of the lake.

“It was really cold the first day and the Frittside and a spinnerbait were key when it got windy and the fish came up schooling around me,” Lane said. “The rest of the day was flipping a black and blue Berkley PowerBait The General on a 5/16-ounce Flat Out Tungsten weight. I would switch to Green Pumpkin when it for really bright and sunny.”

Lane says Deer Stand is a big area, but he feels that his key areas inside of it went dry by the final day.

“I think I flipped everything out of there,” Lane said. “I think the fish are just getting in there to spawn, and I noticed the best areas where the bank was closest to the trees. If you could find that with some pad stems mixed in, it was even better.”