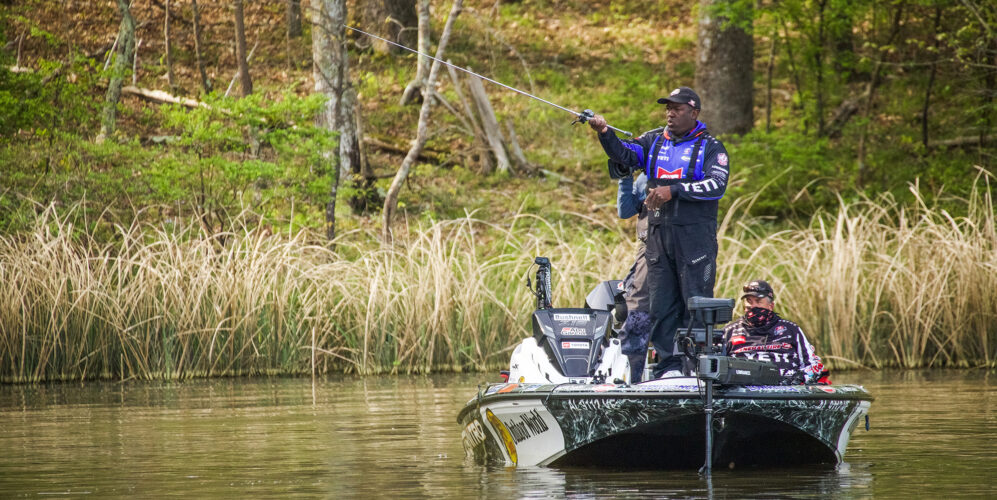 RALEIGH, N.C. – The top anglers from Group A and B switched gears today at General Tire Heavy Hitters Presented by Bass Pro Shops. Instead of Falls Lake and Jordan Lake, they found themselves on Shearon Harris Reservoir. It turned out to be a sight-fishing slugfest, with most anglers targeting spawning bass, both visibly and blind casting to likely spawning areas with a variety of different lures.

Here’s how the second through fifth place anglers caught ’em:

Wheeler was the runner-up in the 2019 Bass Pro Tour event that concluded on Shearon Harris, and he badly wants revenge on the lake. Wheeler got a little bit of vengeance today after catching the Berkley Big Bass (a 7-pound, 8-ouncer) and the $50,000 check that goes with it.

“I was so close to winning here last time and want payback on this lake,” Wheeler admitted. “I saw that big one on a bed and knew it was a $50,000 fish and spent 45 minutes to catch it.”

Wheeler started the day fishing a frog but switched to sight fishing for spawning bass once the sun got higher in the sky.

“I caught several on a Googan Baits Bandito Bug and a few on the Lunker Log,” Wheeler said.

Jones is one of the best sight-fishermen on the Bass Pro Tour, and that’s how he attacked Shearon Harris to advance to the Championship Round. He also made the final day in 2019, finishing eighth. He’s hoping to improve on that finish this time.

“The key today was fishing real slow in spawning areas and fishing for spawning fish I can see,” Jones said.

He used both a Texas-rigged tube and a soft stickbait fished on a Neko rig.

California’s Ish Monroe is primarily fishing with one of his favorite lures: a frog. He’s also mixing in some sight fishing when he runs across a fish he can see.

“I’m catching them the way I like to catch them with a River2Sea Ish Monroe Phat Mat Daddy Frog,” Monroe said. “Today was mostly the frog skipping it under overhanging limbs and fishing it around reed clumps. If I saw one on a bed, I would use a Yamamoto Senko. I’m excited about tomorrow because this lake has some big ones and plenty of spawning fish right now.”

After catching the $25,000 Berkley Big Bass for Group B’s Qualifying Round, Lefebre could already count this week as a success. It keeps getting better for him as he advanced to the final day.

Lefebre is pitching to areas he thinks fish are spawning, and also visually fishing for them.

“I’m doing some sight fishing but only giving each fish about 15 minutes before moving on,” Lefebre said. “I’m using a creature bait and a small Yamamoto Senko on a 1/8-ounce weight with a small light wire hook and fishing slow.”