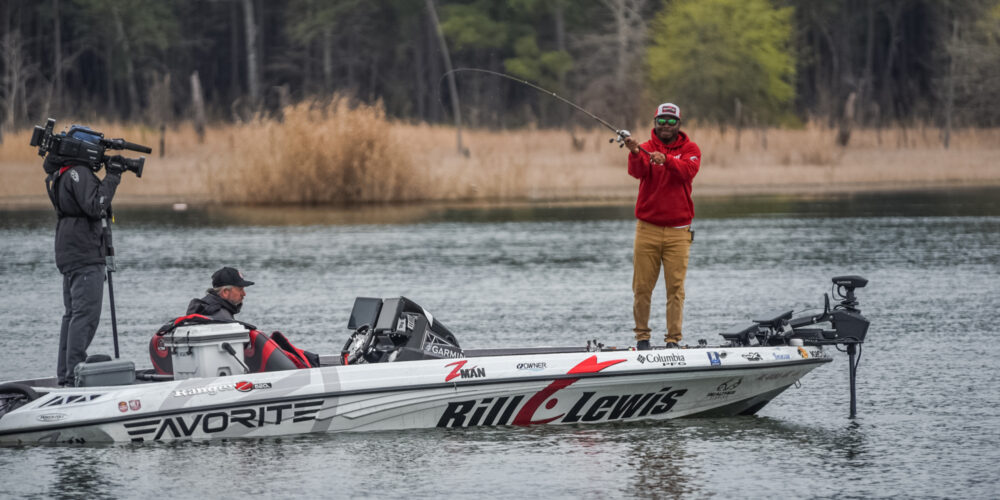 JASPER, Texas – As the 40 anglers of Group B took their turn at Sam Rayburn Reservoir Monday on the second day of Toro Stage One Presented by Power-Pole, it was a pretty close mirror image of  Day 1: tough fishing for most, with a handful of big fish mixed in. The top finishers found success on a variety of patterns that ranged from frogging and throwing swim jigs in muddy water, to focusing on the main lake’s schooling bass.

Louisiana’s Gerald Spohrer ended the day in second place with seven bass for 26-2, including a solid 7-0.

“I’m very happy with how things turned out,” Spohrer said. “I swam a jig around all day in the muddy water. That’s my confidence in the springtime, whether they’re prespawn, spawning, or postspawn.”

Another key for Spohrer was covering water quickly and focusing on the best areas in his area and not wasting time on less-productive water.

“It looked like I was fishing really fast, but I was just hitting the high percentage areas,” he said. “The key was going from cypress tree to cypress tree. I’m hoping to do it again when we come back out here, win my group, and make the Championship Round.”

Brent Ehrler’s day started fast and furious and he had most of his weight during the first period, along with a slew of fish that didn’t quite meet the 2-pound minimum for the event.

“The day started really well, and I felt like I was getting in a groove,” Ehrler said. “I found an area where they were biting and then went an entire period without catching another scorable fish. I finally caught another one in the final hour.”

Looking ahead, he’s trying to figure out his next move.

“I have some decisions to make before my next round,” Ehrler admitted. “I’m not comfortable with how I didn’t catch them after the morning. I’m planning to change things up and hopefully make the Knockout Round.”

Like Ehrler, Mark Daniels Jr. had a strong morning before scraping together a few additional fish later in the day.

“This morning started off hot and heavy,” says Daniels. “I caught them doing one of my favorite things, throwing a Rat-L-Trap. I was snapping it and creating strikes as it went through the grass.”

He added a few key fish on a jerkbait, including a 4-11 shortly after noon to help the cause.

After a tough practice, Brandon Coulter is thrilled to be in fifth place after the day.

His total included seven fish caught on a variety of different lures.

“I caught them on several things, but the Savage Gear Hop Popper Frog was the best bait of the day,” Coulter says. “Things started to click, and I feel good about the day. Sometimes, the tournaments where you have the toughest practices are the ones that you do the best in.”