TOP BAITS & PATTERNS: How Connell and the Top 10 Caught ’em at Cayuga Lake 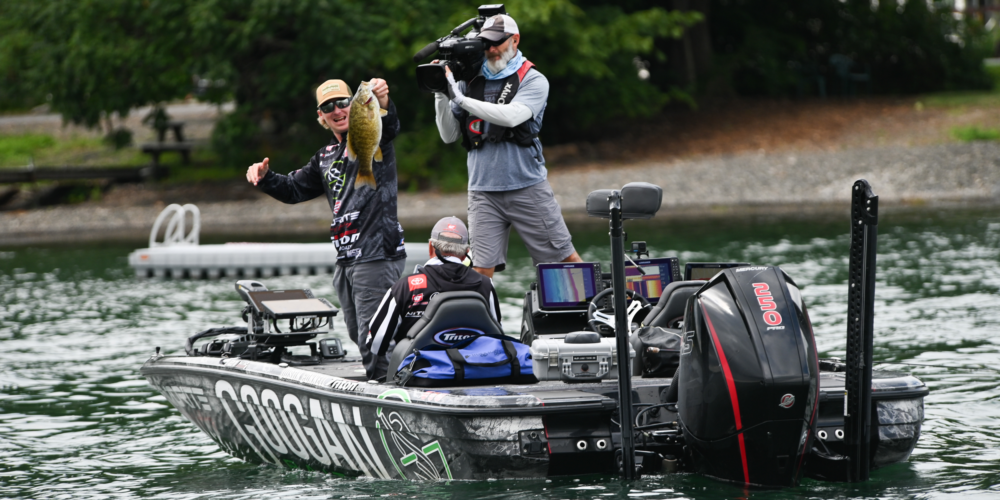 UNION SPRINGS, N.Y. – While the Top 10 anglers competing on the final day of Fox Rent A Car Stage Six Presented by Googan Baits fished all around Cayuga Lake for both largemouth and smallmouth bass, the drop-shot was king. Throughout the course of the six-day event, the 80-man field found success with other lures like crankbaits and vibrating jigs, but finesse fishing shined for both species at various depths and helped Dustin Connell claim his second Bass Pro Tour win of the season.

A mid-practice switch of focus from largemouth to smallmouth was the right move for Connell. He caught his fish with a green pumpkin Googan Baits Drag n’ Drop to imitate gobies and a baitfish profile bait to imitate alewives, employing a ½-ounce drop-shot weight to get down quickly.

“One of the biggest keys was panning around with my Lowrance ActiveTarget to find the key areas holding fish,” Connell said. “It was mainly 20 to 30 feet and either gravel, stumps, rocks, or boulders – it didn’t have to be a big object to hold multiple fish. And, if you left to let a spot rest, you could come back 30 minutes later and more would be on it.”

Connell also included weather in his game plan, focusing on the lake’s western side.

“I checked the weather all week, specifically so I could stay out of the wind,” he said. “I couldn’t do what I was doing in big waves and the waves crashing on the boat cause smallmouth to get weird and they don’t want to bite. So I stuck on the west side since it was protected from the northwest wind.”

To claim his sixth Top 10 in six regular season events this year, Jacob Wheeler primarily relied on a crankbait fished around the grass. The depth changed based on where he was fishing, and he had to continually adjust to the pressured fish.

“It all came down to the irregularities in the grass, whether it was points, turns, or depressions,” Wheeler said. “The points got the most pressure and didn’t hold up, so you had to relocate the schools daily. Early in the week, you would catch one and see a bunch follow it in, and then it was one or two by the end of the week because the schools were broken up.”

Fishing the lake’s northern end, Wheeler targeted depths between 10 and 15 feet and relied on a Rapala DT-10, DT-14, and DT-16, depending on the depth. He alternated between the bluegill and green gizzard colors.

“The further you went down the lake, the cleaner the water was and the deeper the grass would grow,” Wheeler said. “The crankbait was to locate them, but I did have to pick up the spinning rod when the fish got goofy. I caught some on a drop-shot and some on a Neko rig.”

Each day offered something different for Andy Montgomery and he used various baits, adjusting by the round and conditions.

“Each day was a little bit different for me,” Montgomery said. “The Strike King 6XD in chartreuse perch and a drop-shot rig were a big deal the first few days and got me to the Knockout Round and the final day.”

He focused on the lake’s northern end with those baits, targeting the break line with grass between 15 and 18 feet of water. On the final day, with Connell and Wheeler far out in front of the pack, he did what he does best (fishing docks with a jig) and rallied to a third-place finish.

“I started fishing a lot of shallow docks with a jig and made a run to finish third,” Montgomery said. “I was using my Strike King Skipping Jig with a Strike King Rage Bug – both in green pumpkin – and caught some on super-shallow docks to move up in the standings in the afternoon.”

Florida pro Terry Scroggins notched his first Top 10 on the Bass Pro Tour using a straightforward approach. He primarily fished a 200-yard stretch of grass around Frontenac Island – visible from the tournament takeoff at Frontenac Park. His bait was a ½-ounce green pumpkin vibrating jig with a matching trailer.

“It was hard to find the really good green grass and that’s the only place I found it,” Scroggins said. “I went back and forth through that area and focused on the grass in 8 to 10 feet of water, ripping a vibrating jig to get the fish to react.”

Zack Birge mixed it up as well as anyone in the field, fishing various baits and cover. He had good days with largemouth, smallmouth, and with mixed bags. Fishing the lower end of the lake each day presented a different challenge.

“The first day, I was catching smallmouth on a Ned rig and black marabou hair jig,” Birge said. “I found some current from what I think was an underground pipe way down the lake and they were set up right on the current seam. It was full of big smallmouth the first day. I caught some there the next day, but had to switch it up when the spot dried up.”

Docks were key during the Knockout and Championship rounds, and it turned to primarily largemouth. Birge was able to catch the Knockout Round’s Berkley Big Bass (a 6-15) on a natural bluegill colored Yo-Zuri 3DB Series Mid Range 1.5 Crankbait. He fished the same docks on the final day but opted for a drop-shot rig with a bluegill color finesse worm.

“I was mainly targeting drop-offs, big flats right before they fell off into the abyss,” he said. “Most fish came from the 20- to 25-foot range. Some were suspended and some were on the bottom, mainly roaming around.”

Ebare said he saw individuals and groups of fish on his forward-facing sonar and plied them with a drop-shot rig with a Strike King Baby Z-Too in pearl and a handful of other colors.

“I also caught some key largemouth cranking a Strike King 5XD in the grass to get me to the Knockout Round,” he said.

Kicking the event off with a massive 127-1 total on the first day of competition, Justin Lucas employed a drop-shot to win his group and advance to the Championship Round. It was his primary weapon as he targeted deep largemouth.

“I was focusing on 15 to 25 feet of water, fishing holes in the grass and isolated patches,” he said. “There were also some fish that were around the bait. It was a mix of forward-facing sonar, 2D, and just casting – it was a little of everything.”

Idaho pro Cody Meyer was able to do well each day by fishing a drop-shot and crankbait in the grass while also rotating in a Z-Man Evergreen Jack Hammer ChatterBait during the Championship Round.

“Most of my bass came on the drop-shot with a green pumpkin watermelon laminate Daiwa Yamamoto Neko Crawler and Neko Fat,” Meyer said. “The bigger profiled baits seemed to be best. I was targeting offshore grass in the same area, but they moved a little each day, and I never caught fish out of the same clump of grass twice.”

When the wind picked up, Meyer utilized an Evergreen CR13 and CR16 in Ghost Wakasagi. On the final day, it was a bluegill-colored 3/8-ounce ChatterBait with a green pumpkin Yamamoto Zako as a trailer, fished primarily around a shallow seawall.

Alton Jones’ strategy was to target water that was slightly shallower than what the rest of the field was focusing on.

“It was shallower, but not shallow water,” Jones said. “I was fishing 10 to 12 feet deep and looked for areas that had grass coming up 6 or 7 feet off the bottom.”

He utilized his Garmin Panoptix LiveScope to locate grass and individual fish with a drop-shot with a 6-inch Roboworm Fat Straight Tail in Aaron’s green pumpkin.

“I used LiveScope to look for holes in the grass and for sniping individual fish; it was a lot of fun,” Jones said. “I stayed within a few miles of takeoff on the north end. The areas reloaded for me every day except for the last day.”

Fresh off his second consecutive Tackle Warehouse Pro Circuit Angler of the Year title, Michael Neal won Group B and waltzed directly to the final day. He did his damage on Cayuga with a drop-shot, catching a combination of largemouth and smallmouth.

“I was fishing anywhere from 20 to 35 feet deep, looking for an isolated rock or something different,” he said. “Cayuga is pretty featureless and not a lot of contours, so the key was anything that stood out. The fish were chasing bait in some areas, but most were right on the bottom.”

“I was fishing green pumpkin in the SoMolly, but it didn’t seem to matter as much and the Slim Minnow was good in different baitfish colors,” Neal said.