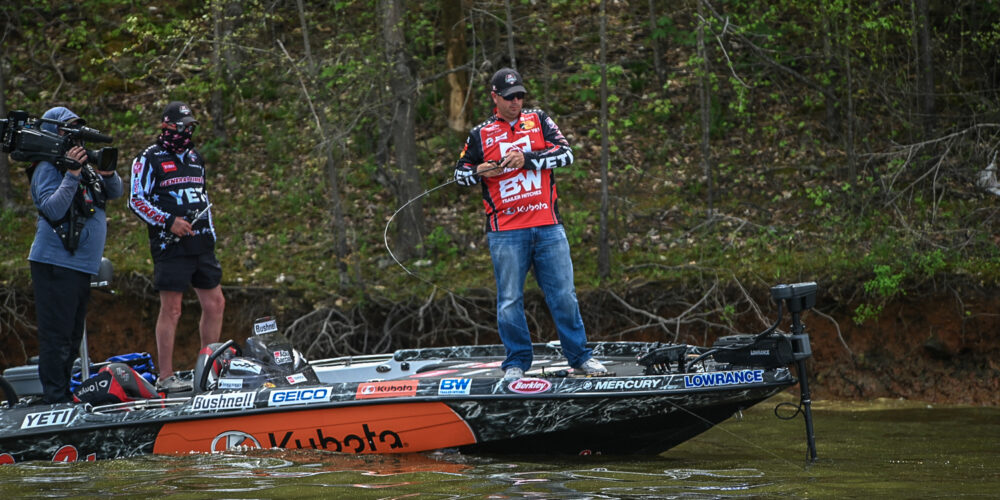 RALEIGH, N.C. – The anglers in Group B took their turn Saturday at General Tire Heavy Hitters Presented by Bass Pro Shops. This group of 20 anglers fished Falls Lake instead of Jordan Lake – the site of Group A’s first qualifying round – and experienced similar conditions: There were many ways to catch fish, and the quality of bass in this region is still evident.

Thrift Frogs His Way to the Top of Group B

Here’s how some of the top five finishers caught their fish.

Arkansas pro Stephen Browning caught fish throughout the day, but a late-day surge moved him into the second position. He’s happy to have found some success after struggling on Falls during the 2019 Bass Pro Tour stop.

“I didn’t have a good time here last time,” Browning said of that 2019 event. “Today, I went old school and fished right in my wheelhouse. I was shallow and kicking up mud all day in super skinny water.”

Browning found success flipping and pitching a tube with a 3/16-ounce weight to shallow targets.

“It was a real subtle presentation,” Browning said. “That’s really important because the fish are so shallow.”

Cliff Pace flirted with the lead in the middle of the day and wound up in third with a consistent day. He felt good about how the day unfolded.

“It looks easier than it was out there,” Pace said. “But I’m happy with the day and it seemed like every decision I made worked out. I’m just rolling with the flow.”

Pace’s approach includes three lures: a V&M spinnerbait, a Jackall Squad Minnow jerkbait that’s no longer available in America, and a V&M Flat Tip finesse worm. He’s deciding what to fish based on what’s in front of him.

“They’re mainly prespawn areas and some are actual spawning areas,” Pace added. “All three of those baits caught some fish, and I’m changing based on the areas I’m fishing and the conditions.”

Ehrler utilized three different baits and patterns; all of them accounted for their fair share of his total.

“I started wacky-rigging a Yamamoto Senko and caught some on that early,” Ehrler said. “It was hard for me to cover water like I wanted to, so I had to switch it up.”

The Daiwa pro also utilized a Lucky Craft 1.5 squarebill in BE Gill and caught quality fish, including a 6-13 in the second period.

“That was a key bait for me in the middle of the day,” Ehrler said. “Later in the day, I started to run the bank pitching a drop-shot to dark spots and stumps.”

His drop-shot setup was beefed up with a bigger worm, heavier line, and fished on a baitcasting combo.

“It was a good day overall,” Davis said. “My main weapon was that Game Hawg with a 3/16-ounce weight. It was very simple stuff, and the key was fishing real slow and keeping my bait wet.”