VIEWER’S GUIDE: What to Watch for Saturday on Discovery Channel (7 to 9 a.m. ET/PT) 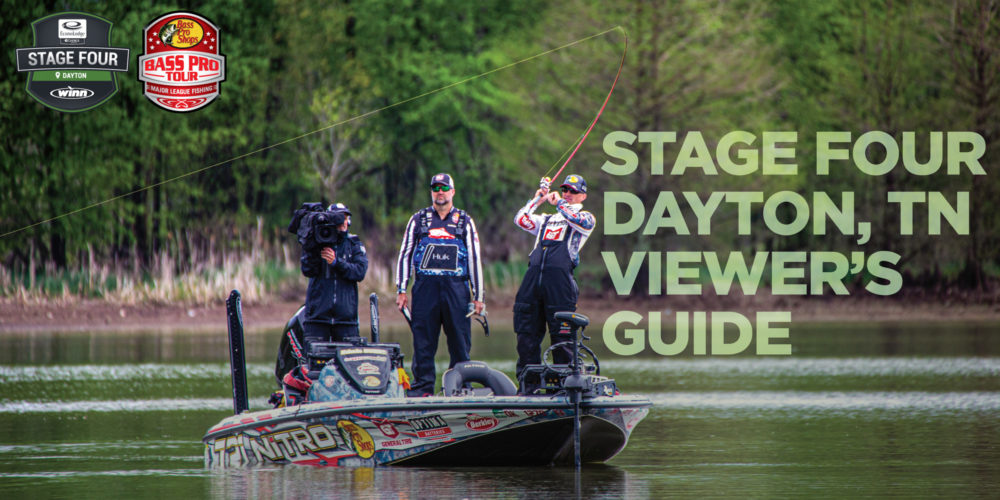 DAYTON, Tenn. – From the unknown bonanza of Raleigh, North Carolina – where Jacob Powroznik took home his first MLF trophy – the 80 anglers fishing the Bass Pro Tour roster made a swing through East Tennessee in early April, arriving at one of the most legendary tournament fisheries in the world: Lake Chickamauga in Dayton.

Part of the fabled Tennessee River chain and one of the most popular tournament venues in the world, Chickamauga and “Basstown, U.S.A” welcomed the Econo Lodge Stage Four Presented by Winn Grips with all the potential of a dynamic springtime bite: largemouth in all three phases of the spawn, in one of the most historically productive weeks of the year.

As viewers tune in to the Bass Pro Tour on Discovery Channel this Saturday (7 to 9 a.m. ET/PT) for the Stage Four Championship Round, here are some key storylines to follow:

There are very few things in professional bass fishing as powerful as the “home lake jinx.” Throughout the history of the sport, the percentage of anglers who win tour-level events on their local fishery is inordinately small.

So for Dayton residents Michael Neal and Andy Morgan – two of the 10 anglers competing in the championship – the final round on Chickamauga was about defeating the jinx as much as it was about besting the eight other anglers in the field.

“It’s tough to win on your home lake,” Morgan admitted earlier in the week. “It’s awful easy to fall back on old habits and awful easy to have a spot ‘lie to you’ by letting you believe (a condition) is there when it really isn’t. The home-lake jinx is real.”

Morgan would know. The three-time FLW Tour Angler of the Year had narrowly escaped such a “lie” in the early rounds of the competition, choosing a starting spot in the Shotgun Round that he thought would be more productive than it actually was. The Favorite Fishing pro survived that “lie” to eventually advance to the final round, but other local pros – Wesley Strader, Jacob Wheeler and John Murray – were less fortunate, falling out in the Elimination and Knockout Rounds.

As Discovery viewers will witness, the weather in Rhea County the week of Stage Four was unpredictable. Torrential rains had pounded the field in the Shotgun Rounds, and Championship Sunday started off with a historical change in the launch procedure, created by a forecast of high wind, rain and lightning. Instead of launching together in the town of Dayton, the final 10 were allowed to trailer their boats to a location of their choosing to launch, saving them from hazardous long runs in dangerous weather.

But how would that change the bite? Would there be enough visibility for anglers like Jared Lintner and Edwin Evers to locate bedding fish? And would some of the week’s most productive shallow areas become completely blown out, causing the field to scramble?

“Bad weather can do two things, one good, one bad: it can cause fish to bite, and it can also ruin your best spots,” Morgan admitted.

Stage Four represented the fourth consecutive time that Edwin Evers made it to the Championship Round; also joining him was Powroznik, who had claimed victory in Raleigh just three weeks prior. Judging by Evers’ consistency, and by Powroznik’s progression through the first five days of the competition – he caught over 60 pounds in Group B’s Elimination Round, and then led the Knockout Round with over 67 pounds – a two-time winner was a definite possibility in Dayton.

“I love fishing while they’re spawning, and that’s what’s going on here right now,” Powroznik admitted. “It would be hard for me to win a five-fish event doing what I’m doing right now, but in the MLF format, you get to go out and catch as many bass as you possibly can. That suits my style of fishing right now.”