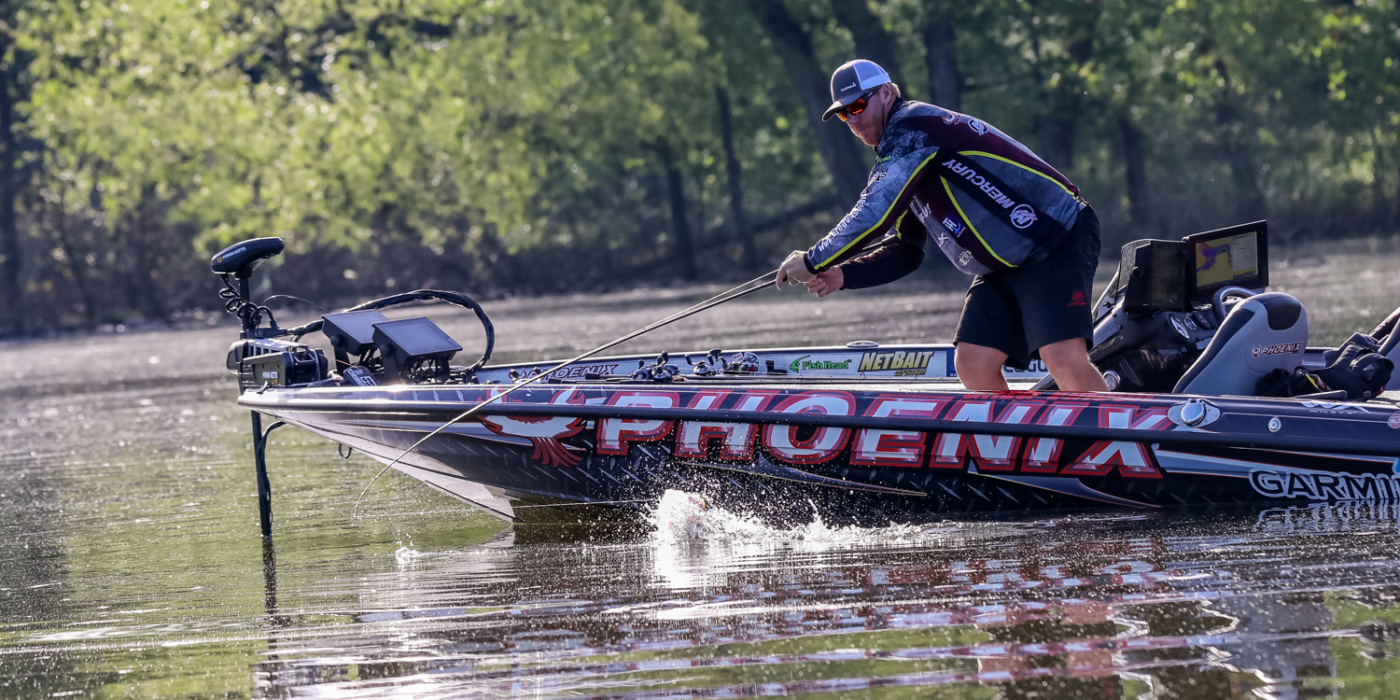 Greg Vinson battles one of his record 52 fish in the Shotgun Round. Photo by Josh Gassmann

BRANSON, Mo. – There’s an old saying about records being made to be broken. Greg Vinson got that memo. Twice.

The Alabama pro staked a claim to the MLF Bass Pro Tour record books Thursday in the first Shotgun Round of the Berkley Stage Six Presented by TrueTimber, stacking a record 52 bass from Table Rock Lake onto SCORETRACKER® for 83 pounds, 6 ounces (also a record). Vinson led a group of seven anglers who weighed 60 pounds on the day (yet another Bass Pro Tour record).

Vinson’s performance was part of the most prolific day of fish-catching in the young history of the Bass Pro Tour.

After a slow start to the morning, Vinson staked a claim to the top of SCORETRACKER® midway through the first period. After moving to the lower end of the White River arm, he weighed 18 fish in the first period for 28-5, and followed that up with 25 pounds in Period 2. Over the course of the 7 ½ hours of official competition time, the Mercury pro averaged a fish every 8.6 minutes.

“That was the most unbelievable day of fishing I ever had,” Vinson admitted. “I got off to a slow start, but once I made a move to something new, everything I did seemed like it was right. Everywhere I went, I caught fish, and I didn’t see another angler all day long. To be on something that good and not see another competitor in this field is pretty rare.”

Shotgun Round 1 Loaded with Heavyweights

If professional bass fishing doesn’t work out for Jeff Sprague, he has a future in fortune telling. As reported in the live blog, Sprague’s assessment of the Table Rock bite was that “Somebody is going to wreck ‘em today.” Sprague was absolutely correct, if a little understated. SCORETRACKER® was loaded with anglers who indeed wrecked ‘em in Group A: 26 anglers weighed 40 pounds or more, 17 connected with 50 pounds or more, and four surpassed the 70-pound mark.

“This place has just been pelted with tournaments and locals, and it’s putting out numbers and fish like it did today,” said Sprague, who finished fourth on the day with 70-4. “This is just an amazing fishery. I actually expected to catch bigger fish than I caught today, so I know there are some bigger ones that aren’t being caught. And we’re going to catch those fish. There are going to be some more phenomenal numbers ahead.”

Group B Takes Its Shot at the Rock

Now that the Elimination Line has been established above the 50-pound mark, the 40 anglers in Group B will take their turn on Table Rock on Saturday for Shotgun Round 2. Unlike the anglers in the first round – who fished in mostly sunny, sometimes-breezy conditions – Group B heads into Saturday morning just ahead of a storm system that will bring 10- to 20-mph winds and possible thunderstorms.

As outlandish as it sounds, that could make the bite even better.

“I’m looking at a forecast for south wind, seeing 10 to 20 (mph),” said MLF NOW! analyst Marty Stone. “The harder the wind blows on these Ozarks Mountains lakes, the more the fish bite, and the bigger they are. Our grade of 3- to 5 pounders could go up if it blows 20. This lake is slam-full of 3- to 5-pounders, and they didn’t really show on Friday.

“Group B now knows that they have to go out and catch 50 pounds, so they’re going to be a lot less patient with marginal water, and they’ll get more aggressive. Our total weight could be more. I won’t say something crazy like we’ll catch more scoreable bass, but I’m not going to rule it out, either.”

Looking Ahead to the Weekend

Shotgun Round 1 daily awards were:

Shotgun Round 2 competition begins Saturday at 6:30 a.m. CT with live, official scoring available at “lines in” via SCORETRACKER® on MajorLeagueFishing.com and on the MLF app. The MLF NOW! live stream starts at 9 a.m. CT, with live, on-the-water coverage and analysis provided by Chad McKee, JT Kenney, Marty Stone, and Natalie Dillon until lines out at 2:30 p.m. The Berkley Postgame Show – hosted by Steven “Lurch” Scott – will start at 4 p.m.