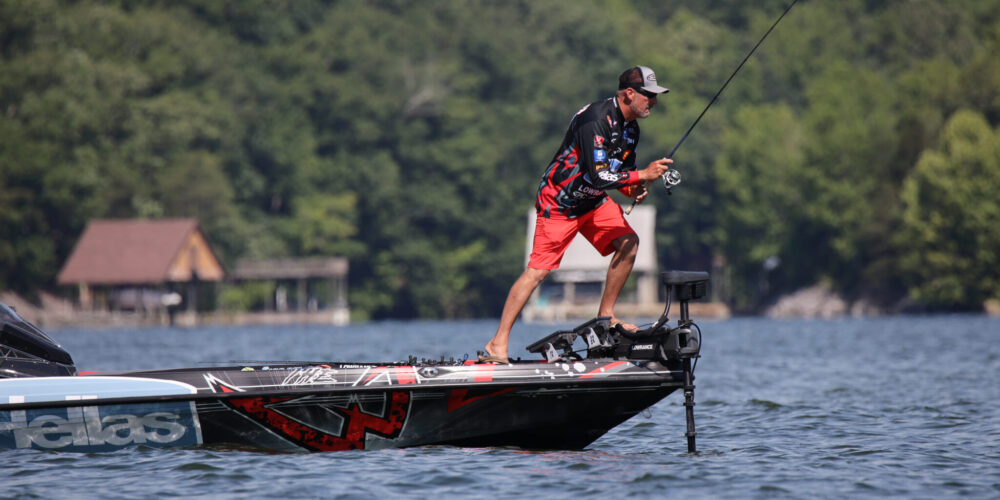 Tennessee pro Wesley Strader believes one of the biggest things you can do to overcome the challenge is to upsize your lures. It’s a simplistic approach that he relies on every year after the bass spawn to target the biggest postspawn bass in the area.

Strader puts himself in the right areas and focuses heavily on transition areas as fish move to deeper water before deciding on the lures to use. His years of experience tell him that the bass don’t rush deep right away; with male bass still hanging around guarding fry, and the bigger females staying close, not far out from where they spawned.

“Bass generally move out of spawning areas the same way they came in and transition areas are key,” he said. “It all depends on what type of lake you are on, it could be where rocks and gravel switch to more vertical rock and bluffs. On lakes with a bunch of docks, the docks closest to the mouth of the spawning pockets are usually best. If there’s a lot of flatter banks with rock, the fish tend to gravitate to the points.”

Bust out the Big Baits

While tough fishing may lead some to downsize their offerings, Strader goes to the other end of the spectrum and uses the biggest bait he can, including soft plastics and swimbaits.

“A lot of times, the fish don’t want to eat unless something big is presented to them, especially the big ones,” he said. “They don’t always want to waste energy chasing little shad and would rather eat once and be done with it. The big ones are still in that hangover period from the spawn and get lethargic for a while until they have enough energy to get back to normal.”

One of Strader’s go-to baits is a Zoom Brush Hog in watermelon candy or green pumpkin with a little dab of chartreuse on the tips of the bait to emulate bluegill.

“Year in and year out, I’m using that bait either on a Texas rig or on the back of a football jig this time of year,” he said. “I’ll pitch it around or use the full-sized Brush Hog as a jig trailer and drag it around. It’s a bulky profile, but they do not like it. There’s something about a bigger bait that makes big fish that are hesitant to bite eat it.”

Strader likes a swimbait for even bigger offerings, either a 5-inch Zoom Swimmer paddle tail swimbait or a larger swimbait like the 8-inch Megabass Magdraft.

“The Freestyle version of the Magdraft is great for fishing brush and other cover, and I’ll rig it on a 7/O TroKar magnum weighted swimbait hook,” he said. “For docks, I like the treble hook version of the bait. This window doesn’t last that long, maybe two or three weeks, but I feel that it’s the time when you need to be throwing a big bait if you want to catch big ones.”