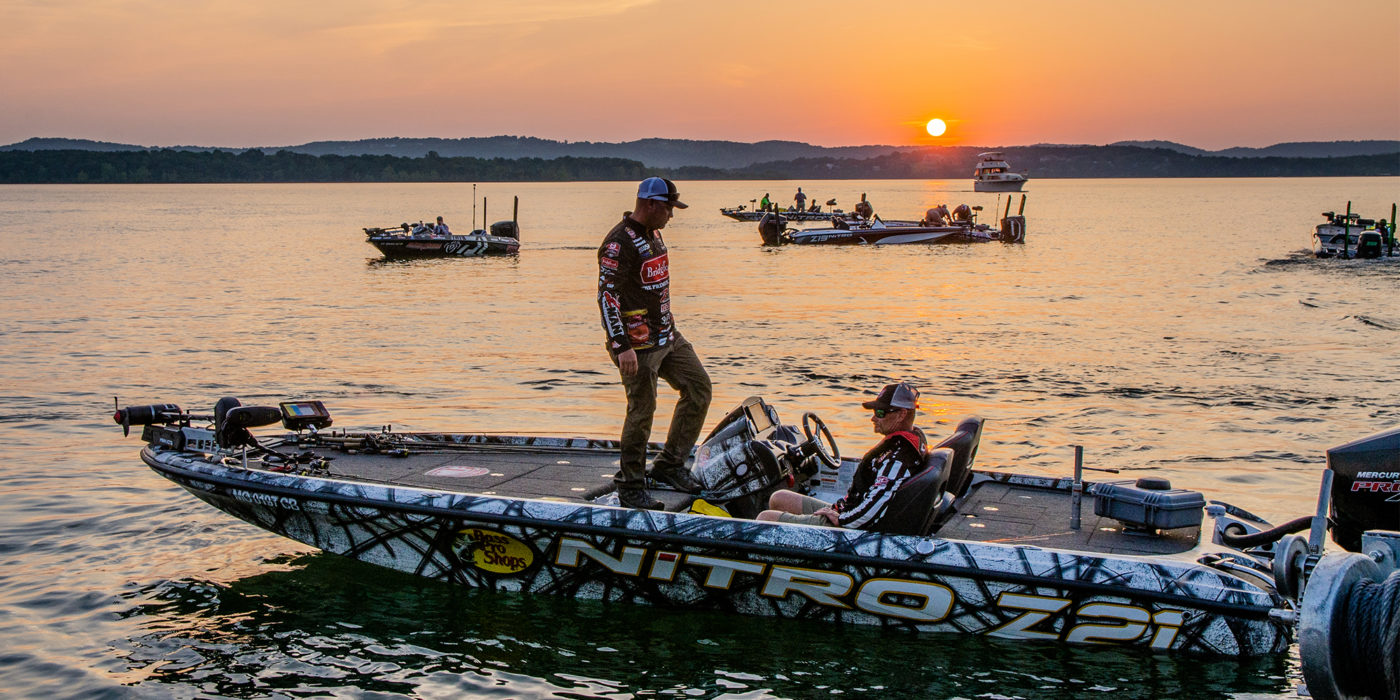 BRANSON, Mo. – Another record was set, but the drama of the day was around the 20th-place position, as is often the case during Elimination Rounds of the Bass Pro Tour.

During the final period of the first Elimination day of the Bad Boy Mowers Stage Seven Presented by Covercraft, 15th to 25th place was in constant change, with anglers moving in and out of the safe zone until time expired.

Some last-minute heroics changed the field for Tuesday’s Knockout Round, and some anglers saw their chances slip through their fingers.

After his fantastic day in Friday’s Shotgun Round, Jacob Wheeler could have stayed home today, and would have only fallen to third place. He showed up, of course, and caught 20 fish along the way, but much of his day was spent idling and looking for new areas.

After his Shotgun and Elimination Round, he has new Bass Pro Tour record 108 fish for 160 pounds, 1 ounce.

Shin Fukae remained in second with 85 fish for 143-1. In all, 12 anglers surpassed the 100-pound mark for the first Shotgun and Elimination Rounds.

He moved into 20th late in the day after several pep talks to himself on the MLF NOW! live stream.

“C’ mon, Brownie,” he repeated as the clock ticked, and it worked: “Brownie” gets one more chance to fish Table Rock.

Highs and Lows for Clausen

Luke Clausen began the day in 17th place and fell as low as 27th in the standings. His day included a stretch where he had trolling motor issues and needed to swap his boat for an MLF-provided boat.

Lost time moved him down the standings, but a furious rally moved him back to 18th to finish the day, even though he received two fish-landing penalties in the final half hour.

With no waypoints in the replacement boat showing his offshore spots, Clausen moved to a bank where he had some bites in practice.

“It was the right bank and right time to be there because they were feeding in that stretch,” he said about the closing moments of the day.

In the end, he was close to where he started the day.

Both Jason Lambert and Keith Poche found themselves on both sides of the Elimination Line during Period 3, but each of them fell short. They finished 21st and 22nd respectively. Poche started the day in 19th and Lambert in 24th.

The weather in the Branson, Missouri area felt very summerlike this weekend, but things are set to change. The predicted afternoon thunderstorms for today never materialized, but cloudy weather and a temperature drop is the forecast for tomorrow. The Knockout and Championship Rounds could see another change as rain and thunderstorms are predicted.

Elimination Round 1 daily awards were:

Competition begins Monday at 12 p.m. CT, with live, official scoring available via SCORETRACKER® on MajorLeagueFishing.com and on the MLF app. The MLF NOW! live stream begins at 11:55 a.m. CT with coverage of Period 1, with Steven “Lurch” Scott and Rob Newell calling the live action. Full coverage continues at 2:30 p.m. when Chad McKee, JT Kenney, Marty Stone, and Natalie Dillon pick up the commentary and analysis until lines out at 8 p.m. There will be no Berkley Postgame Show until the Championship Round.