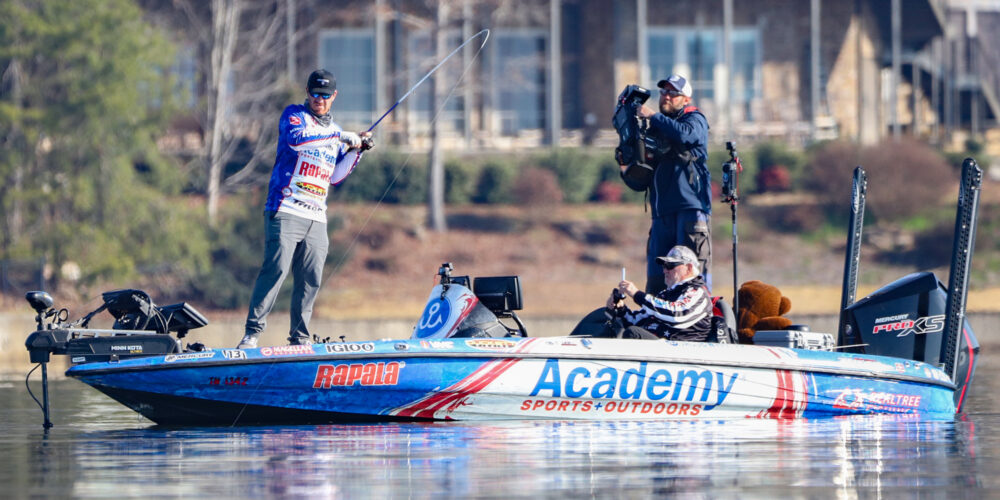 CULLMAN, Ala. – If Friday’s results on Lewis Smith Lake are any indicator of the second half of the Favorite Fishing Stage Three Presented by Mercury, prepare yourself for an action-packed weekend.

Group A’s second Qualifying Day produced plenty of spotted bass and some high-quality largemouth, including two more than 6 pounds – monsters for Smith Lake. There were also some excellent individual performances as anglers fought to advance to the Knockout Round.

The 40 anglers in the group combined for 300 scorable bass on Friday, the best total so far of the three days of competition. This came despite the fact that many of the anglers near the top of SCORETRACKER® laid off their fish when it was clear that Jacob Wheeler was too far ahead to challenge for the group’s automatic berth in the Championship Round.

But, the improving bite is a good sign of things to come as the tournament progresses.

Wheeler caught 11 bass for 23 pounds, 12 ounces to add to his 57-1 from Day 1, advancing to the Championship Round. This marks Wheeler’s seventh straight Top 10 finish on the Bass Pro Tour and he appears to have the Smith Lake bass dialed in this week.

Wheeler Jumps to Championship Round

As he’s done several times before, including just last week at Toro Stage Two Presented by Grundéns in Quitman, Texas, Wheeler made winning his group look easy. When he returns to the water on Monday, he’ll encounter a drastic weather change as forecasts show wind, rain, and lightning possible for the event finale.

Wheeler came into Qualifying Day 2 with a 26-pound advantage and spent much of the day looking for new water, but he still won the group by 24-11.

“It’s been a good week so far and feels great to automatically advance to the Championship Round and be in a position to win,” he said. “A lot is going to change in three days, I know that. The conditions are supposed to be much different and I’m sure I’ll have to mix it up and try some different stuff when I get back out here.”

The two biggest movers on the day were Justin Lucas and John Murray, who each rode big Friday weights to jump inside of the Top 20 after subpar first days.

Lucas started the day in 25th place and moved all the way up to sixth thanks to 15 bass for 36-04 (including a mammoth 6-4 largemouth caught in the first period). That bass held the lead for Berkley Big Bass of the tournament for much of the day until Randall Tharp stuck a 6-7 late in the day.

Murray had a scary start to the week. He felt dizzy during the second period of Qualifying Day 1 and had his MLF official drive him back to the boat ramp before he felt better and fished the last hour of the day. He ended up with one bass for 2-7 and in 37th place after Qualifying Day 1.

But, the Tennessee pro felt much better and had a great day on Friday with 19 bass for 37-15, both daily bests. The strong day allowed him to jump 27 places to finish 10th in the group and qualify for the Knockout Round.

Group B returns to the lake Saturday for their second Qualifying Day, with half of the anglers going home and the rest advancing. Action kicks off at 8 a.m. CST with lines in. Live coverage of the fourth day of Favorite Fishing Stage Three Presented by Mercury starts at 7:45 a.m. CT on the MLF NOW! live stream. Watch for free on MajorLeagueFishing.com, the MLF app, or the MyOutdoorTV app.