Wheeler Puts the Pedal Down in Third Period, Races to Day 1 Lead on Smith Lake 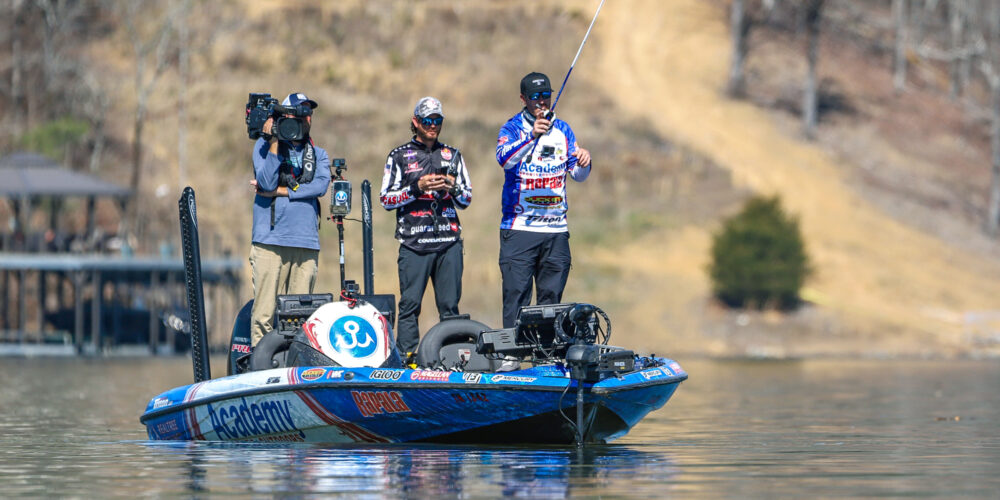 CULLMAN, Ala. – After two frigid, shallow, prespawn-largemouth tournaments to start the 2022 season, the sunshine and 70-degree temperatures on the first day of Favorite Fishing Stage Three Presented by Mercury were a welcome change.

Jacob Wheeler seemed to enjoy the sunshine as well: the Tennessee pro landed 30 spotted bass Wednesday for 57 pounds, 1 ounce, and is well on his way to advancing straight to the Stage Three Championship Round as he built a 26-pound lead over second place after one day of fishing on Smith Lake in northern Alabama.

Overall, it was a relatively tough bite on Qualifying Day 1 with low weights for a lake that is teeming with spotted bass and solid numbers of largemouth. However, some anglers certainly figured out how to catch them (notably, Wheeler, who is well ahead of the rest of the field, a place he’s frequently found himself in over the past several years).

Out of 26 events fished on the Bass Pro Tour, Wheeler has led his group after the first day of fishing eight times, by far the most of any angler (Michael Neal and Zack Birge have done it three times apiece).

Wheeler’s margin over Casey Ashley after the first day is 26 pounds – that weight difference would be enough to place Wheeler sixth in Group A standings. It’s a margin that puts Wheeler’s dominant day into perspective and further highlights his excellence on the Bass Pro Tour.

Wheeler made it look easy as he plinked away at suspended fish with a Rapala Jigging Rap while watching his forward-facing sonar. He caught fish throughout the day and eventually passed Birge for the lead in the final period. Wheeler’s third-period run of 15 fish for more than 29 pounds left Birge and the rest of the field in the dust as he continued to pad his lead until he put his final fish of the day on SCORETRACKER® with 2 minutes remaining in the final period.

Wheeler was at a loss for words as time expired, but he definitely enjoyed himself and is looking ahead to the possibility that his bite will change.

“What a fun day of fishing, and I’m obviously pretty happy about it,” he said. “I learned a little bit today, and I’ll go back to the house and figure out a game plan for my next day of fishing. I’m not going to lock myself into just one thing because the fishing is going to change.”

The Best of the Rest

It was much a closer race behind Wheeler, with eight other anglers having solid days with weights over 20 pounds. Ashley (31-1) and Birge (30-5) are the closest to Wheeler and will need to make a decision when Group A returns to the water on Friday – make a run at Wheeler or switch to practicing for the Knockout Round. As of now, they appear resigned to making it to the Knockout Round.

“I’m extremely satisfied with how the day went after a tough practice, but I don’t think we can catch Wheeler,” Birge admitted.

Ashley agreed that catching Wheeler will be a tall order, but made sure to fish his best water all day long on Wednesday.

“It all came from one little ditch and if not for that, it wouldn’t have been a good day,” Ashley said. “I know there’s no way I could run Wheeler down, so I wanted to catch every one I could to give me a cushion to make the Knockout Round in case they move before I get back out here.”

The Toro Cut Line is held by Brent Chapman with 11-5. It appears that the anglers with more than 30 pounds are relatively safe to advance to the Knockout Round without any more weight when they return to the water on Friday. The six other anglers who eclipsed 20 pounds likely still have some work to do to advance, as fishing should get better with stable water conditions and warming weather in the next few days.

Group B gets its first shot at Smith Lake on Thursday, with the action kicking off at 8 a.m. CST. Live coverage of the second day of Favorite Fishing Stage Three Presented by Mercury starts at 7:45 a.m. CT on the MLF NOW! live stream. Watch for free on MajorLeagueFishing.com, the MLF app, or the MyOutdoorTV app.