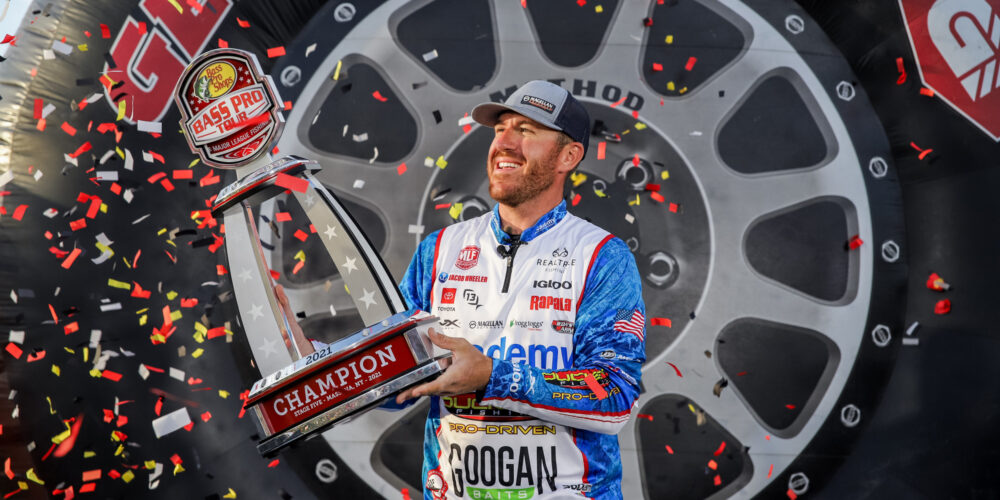 MASSENA, N.Y. – It was a week of record-breaking on the St. Lawrence River for the General Tire Stage Five Presented by Berkley. Fittingly, the beginning of the week in northern New York was dominated by Jacob Wheeler, and it ended with Wheeler setting yet another record on the Bass Pro Tour, winning his fourth Bass Pro Tour event overall and his second in the 2021 season.

The winningest angler in MLF history was able to catch 35 bass for 129 pounds for the seventh MLF win of his career, beating second-place Jeff Sprague by 28-10.

Wheeler’s Qualifying Round Practice Pays off

While the final tally on SCORETRACKER® may seem as though it was an easy win for Wheeler, the Tennessee pro found himself in seventh place after a slow start Period 1 with only five smallmouth for 21-8. As he prepared to start his afternoon, Wheeler made the decision to run to an area he found while practicing during his final Qualifying Round in which he won.

Thanks to a more than 30-pound cushion in that round, the Googan Baits pro was able to scout new areas and find fish for when he would fish in the Championship Round. But not only did he find fish for the future, they were also fish that he knew he could count on because of the area they were located.

“I was looking for fish in the places that had the most wind, because I knew that those areas wouldn’t be fished as much,” Wheeler explained of the wind-soaked area he fished. “I knew if I was going to have two days off the water that I was going to need to find fish that would be there when I got back there in the Championship Round, so I found a spot that was getting beat on by the wind out of the southwest a ton. I knew other guys wouldn’t want to mess with that area because if it was windy like it was, the waves wouldn’t be fun to deal with for flogging and sight fishing.”

Wheeler was able to locate around 40 fish during that practice time in the Qualifying Round, most of which he caught for his 35 total on Wednesday. The Duckett Fishing pro exploded in Periods 2 and 3, adding 30 smallmouth for 107-8 in the afternoon and earning him the win.

It’s another Bass Pro Tour win for the Indiana native—his fourth and the most in the league’s history—but there’s still one more trophy that eludes him. Wheeler has yet to claim an Angler of the Year title, a race in which he’ll leave Stage Five just 14 points behind DeFoe. As impressive as Wheeler’s 2021 has been, he knows there’s still work to be done to catch DeFoe—the other pro who’s won two times in 2021.

“I’m not in the driver’s seat in the AOY race, Ott is,” Wheeler said. “I just need to keep catching bass and try to win the next two events. Even if I win both, it still may not be enough, but I’m going to try. I’d love an AOY win more than anything, but I’m not mad about two wins, a second place at Stage Four and a third place at REDCREST in 2021.”

Top Marks and Notes from the Championship Round