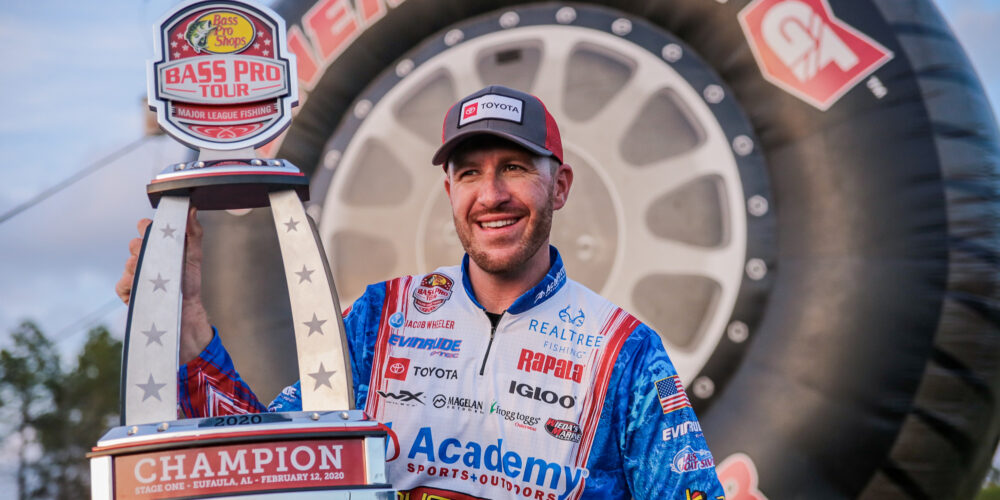 EUFAULA, Ala. – One of the big questions going into the final day of the B&W Trailer Hitches Stage One Presented by Power-Pole was how Jacob Wheeler and Bryan Thrift would adjust. Both had spent the previous days on the bank, thanks to their automatic qualifications for winning their group’s respective Qualifying Rounds.

Apparently, they adjusted just fine: Wheeler and Thrift finished first and second, respectively, in the season opener of the 2020 MLF Bass Pro Tour, with Wheeler eventually running away with it in the final period of competition.

Ott DeFoe rode a strong morning bite to a commanding lead into the second period, but as morning faded to afternoon, Thrift grabbed a seemingly comfortable lead. That is before Wheeler took control for good with an impressive flurry of fish catches in the third period.

As MLF NOW! analyst JT Kenney remarked during Wheeler’s rise to the top, he did it “fast, quick, and in a hurry.” While it was said in humor, Kenney’s remark was a fitting way to describe how quickly Wheeler turned a close tournament into a runaway victory.

In less than 20 minutes, the Team Toyota pro landed seven bass for over 22 pounds and effectively seized the event right then and there. All of this happened during Period 3, with most of the action taking place throughout the 2 o’clock hour.

Wheeler had a great week overall, but his late-day heroics are what resulted in his second Bass Pro Tour win in as many years.

He landed 24 bass for 68 pounds, which was the highest one-day total of the week. To put that into perspective, he caught 51-6 in two fishing days during the Qualifying Rounds, and still won his group and automatically qualified for today’s Championship Round.

While he caught fish in several areas and on different baits, his offshore spinnerbait bite was what sealed the deal. The area that he describes as a staging area – a big point leading into a creek, with fish moving toward the bank to spawn – was something that he found in practice, and it paid off today.

“I fished it the first two days of the tournament, but the water had gotten muddy,” Wheeler said. “I was fishing another spot that was starting to clear up and it made me think of trying this area again. When I went there today, it was even better than it was in practice.”

That move paid big dividends as he plied his signature series 1-ounce Accent “Ledge Series” spinnerbait in the Spot Remover color. Wheeler said he targeted the 8- to 14-foot zone all week long, with 8 to 12 feet being the prime depth range.

His other key baits this week were a Rapala DT-14 and DT-16 and a jig with a Googan Baits Bandito Bug for a trailer.

For a while, it looked like Bryan Thrift might pull it off and win his first-ever Bass Pro Tour event. While it didn’t happen, Thrift was excited with his start to the season as he totaled 13 bass for 40-11.

“I started the event on shallow rock in 3 to 6 feet of water with a Damiki BTC Squarebill and a new big-bladed ChatterBait,” Thrift shared. “As the tournament progressed, I fished those same areas by dragging a jig and fishing the jig around docks.”

As time expired on MLF NOW!, Ott DeFoe said what many were thinking during Wheeler’s afternoon run.

“Jacob Wheeler never ceases to amaze me, that was unbelievable,” he said.

The early bite was crucial for DeFoe all week long, and he again exploited it during Period 1 of the Championship Round. DeFoe finished the day with 10 bass for 34-9, which included a day’s best 6-15 largemouth.

“I caught two right away and then the first spot dried up,” DeFoe said. “They weren’t set up the same as they were yesterday and I couldn’t get them fired up.”

DeFoe’s second area was similar, as he landed three quick fish before the bite slowed down.

The bulk of his bass this week were caught cranking a soon-to-be-released flat-sided Rapala Slim, as well as a DT6 and DT10.