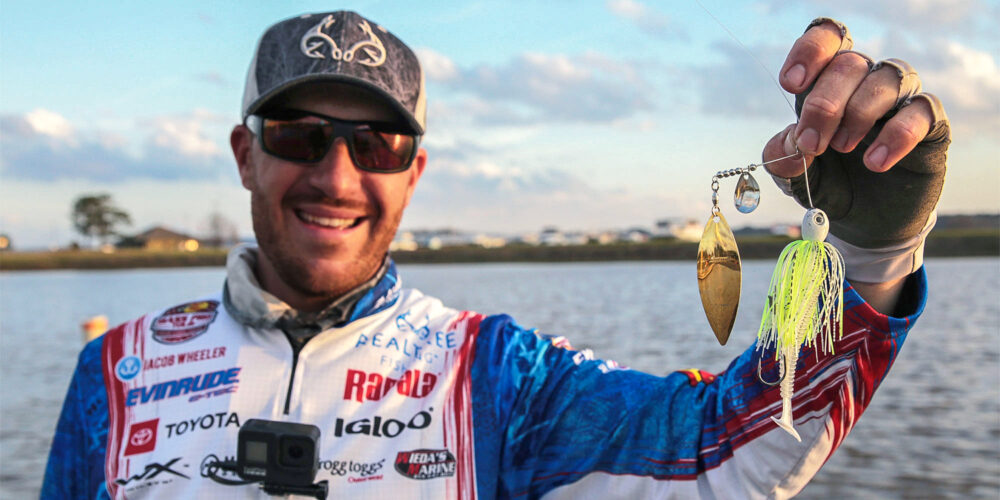 EUFAULA, Ala. – Bass Pro Tour Stage One winner Jacob Wheeler used an old-school bait to put an old-school whupping on the field in the Championship Round of the 2020 season opener at Lake Eufaula.

Wheeler stacked 68 pounds of Eufaula bass on SCORETRACKER® in the final round on Wednesday to beat second-place finisher, Bryan Thrift, by a whopping 27-5, and most of it came on one bait: an old-fashioned, heavy-thumping, big-bladed spinnerbait.

The Tennessee pro had worked his way through the Qualifying Rounds with a Rapala DT14 and DT16 in Caribbean Shad, and a 1/2-ounce black-and-blue jig with a Googan Baits Bandito Bug trailer. As Eufaula’s waters became progressively dirtier and visibility dropped to under 6 inches, the majority of the field went to the bank – the majority except Wheeler (along with Thrift and third-place finisher Ott DeFoe, who also stayed off the bank, but with a crankbait).

Wheeler jumped from brushpile to brushpile in the final round, connecting on 23 of his 24 scorable championship-winning fish with a 1-ounce Accent Fishing Products Jacob Wheeler River Special Select Series spinnerbait in the Spot Remover color, with on Ol’ Big tandem blade setup that the company refers to as “Wheeler’s Ledge Secret” (a gold No. 6 willowleaf and a smaller silver Colorado). He added a 3.8-inch Googan Baits Saucy Swimbait trailer.

“People think that a double Colorado is the biggest-thumping blade – and a lot of time, that’s the best blade – but that No. 6 willowleaf was a key,” Wheeler said. “That’s my ledge spinnerbait: I designed it to be the great offshore spinnerbait that had the right amount of thump.”

Wheeler Stayed in the Strike Zone

Speed and position in the water column were just as important as the bait’s vibration, though, as Eufaula’s heavily stained water pushed fish to the bank, and closer and closer to the bottom as the competition week went on.

“A big key to my success was allowing that bait to stay close to the bottom,” Wheeler said. “The strike zone really shrank throughout the week, and it just got tougher and tougher to get the bait in front of them. You had to get closer to the cover, had to be hitting the brushpiles, and winding your bait closer and closer to the bottom. We had 4 inches of visibility by the final day. Those fish were just set up in a way where they couldn’t see much.”

“The slower reel was a key,” Wheeler said. “That 6.3:1 gear ratio really allowed me to slow that bait down and really feel the thump. I didn’t know for sure if the offshore thing would happen because the water was so dirty, but with all the rain, I think the fish were just used to the dirty water.

“It’s not that easy to ‘hodge-podge’ your way around offshore in the middle of a tournament, but I was fortunate enough to make the right decisions with my practice time and in the tournament to be where I needed to be to win.”