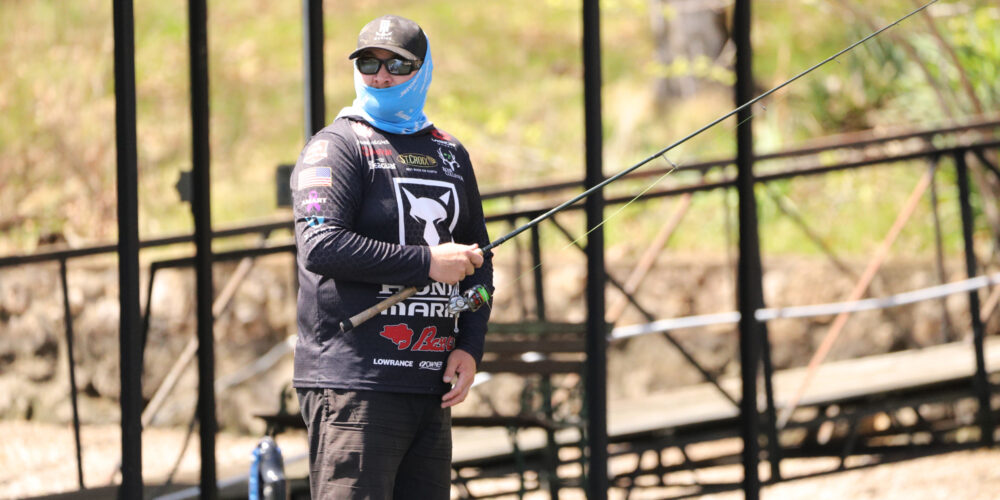 Jesse Wiggins has applied some basic info from his home lake in Alabama to catch fish on Lake of the Ozarks. Photo by Phoenix Moore. Angler: Jesse Wiggins.
May 4, 2022 • Tyler Brinks • Bass Pro Tour

OSAGE BEACH, Mo. – It’s been all about sight fishing for many anglers at the Bass Boat Technologies Stage Four Presented by Bass Cat on Lake of the Ozarks. But while that’s been the dominant approach for many top finishers, it’s not the only way to get it done this week.

Jesse Wiggins came from behind to win his group and and an automatic berth in Thursday’s Championship Round by blind casting to where he thinks beds should be. Jacob Wheeler, meanwhile, won his group by strictly using his eyes and sight fishing for bedding bass. It’s two different strategies, but both are working.

Thursday’s finale may come down to a battle between those looking at them and those just casting. With fishing pressure and weather changes lurking, it’s difficult to tell how it’s going to shake out.

Either way, Wiggins has something working for him on Lake of the Ozarks, just like it does back home on Lewis Smith Lake in Alabama this time of year. His approach helped him rise from seventh after one day to the group win after catching 13 bass for 34 pounds on his second day of fishing.

If Wiggins comes across a fish he can visually see on a bed, he’ll fish for it, but the vast majority of the fish he’s hooked at Stage Four have been bass he can’t see. He’s dialed into a pattern of high-percentage areas that allow him to quickly fish a spot as he dissects the many Lake of the Ozarks boat docks: the corners, cables, and walkways.

“It’s the same thing back home where the fish spawn a little deeper on steep banks or in dingy water and you can’t see them on the beds,” he said. “In the clear water, you can see everyone that’s there, but in the dingier water, I just put it in my mind that there is one spawning. It’ll be the corner of the dock, under the cables or walkways. It’s one of those every time.”

For the sake of efficiency, corners, cables and walkways are all he’s fishing this week; he makes a cast, lets his bait hit bottom and moves on to the next.

“Ninety percent are hitting it on the fall, so I cast and shake it a few times and reel it in,” Wiggins said. “If this were postspawn, I’d work it back to the boat and fish it slower, but right now, I don’t let it sit there for long.”

Wiggins is known for his prowess with a shaky head and that’s his weapon this week: a 3/16-ounce head with a 6.8 Jackall Flick Shake worm that he shortens to roughly 5 inches long.

“It’s about the same size as a 5-inch stick worm with a thick body and it’s soft with plenty of action,” he said. “They make a 5.8 version, but it’s thinner, and I like the bulkier worm for the dirtier water and to catch fewer small fish. They’ve been toting that thing off this week; it’s worked really well.”

“It’s spinning gear, but this ain’t finesse,” he said of the heavier gear. “You let it hit bottom and bring it back and you need the heavier line to get some of these fish out and around the cables. This works great on Smith, Wheeler, Table Rock, and anywhere with steeper banks and floating docks during the spawn.”