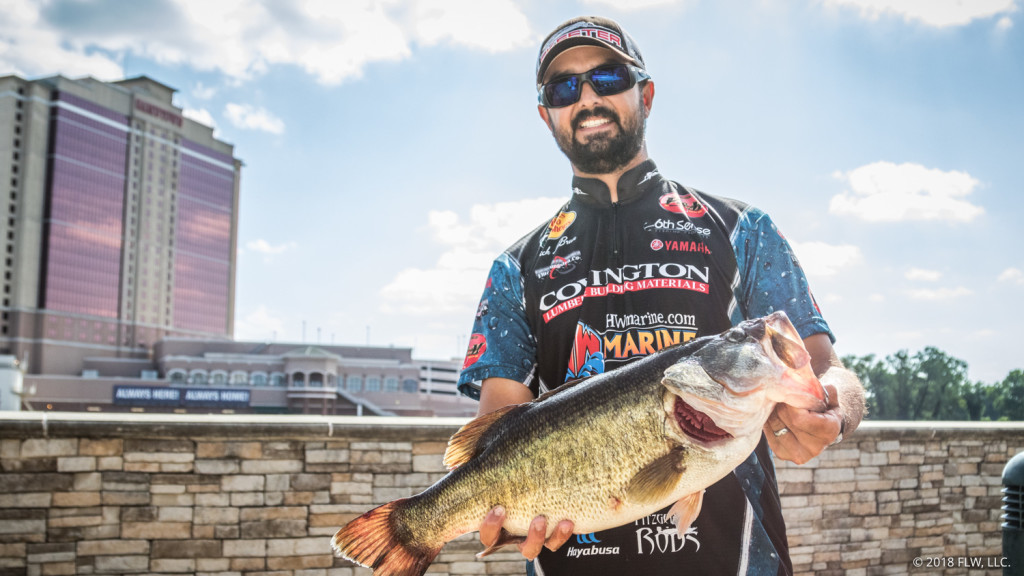 At 8:30 this morning, Nick LeBrun of Bossier City, La., got his first bite of the 2018 T-H Marine FLW Bass Fishing League All-American. After a tough battle with the fish, LeBrun hoisted an 8-plus-pound brute aboard his boat to start his event with a profound bang and set the tone for a very memorable first day in All-American history.

Not only would LeBrun end up taking the lead with a whopping 26 pounds, 9 ounces on a hot day one on Cross Lake, but his competitors brought the heat as well. In all, eight limits of more than 20 pounds were weighed in a field that features 49 of the top grassroots bass anglers in the country. 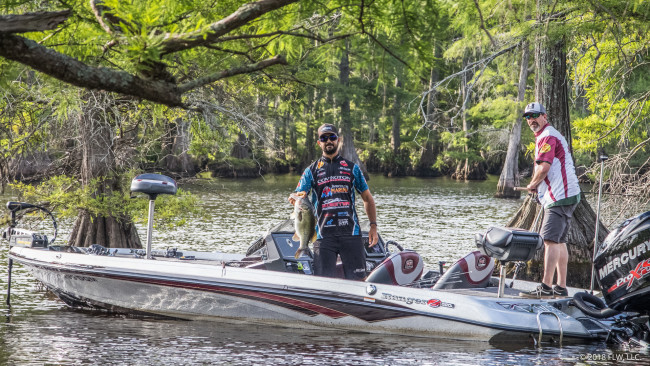 “The way the day started was extremely special,” LeBrun says. “I lost my dad back in February, and when I caught that first fish and it was clearly an 8-plus, I looked up, pointed to the sky and said, ‘That’s for you Pop.’ After I put it in the livewell, I had to take about five minutes to take a breather. That fish was so big it sort of stunned me. I had to walk around the boat for a minute to compose myself.

“I know in order to win this event I’m going to need at least one, maybe two, of those kinds of bites during the tournament. And to get that bite first thing and then get the fish in the boat, it really allowed me to settle down, relax and get in a nice groove.”

The area LeBrun chose to start in this morning was no secret. In fact, two of his friends, also locals in the event, started in the same area. But it’s how LeBrun is fishing that he feels helped give him nearly a 4-pound advantage by day’s end.

“We will get into the details a little later this week, but the way I’m fishing is a way to catch quality,” he says. “The first six or seven bites I got this morning weighed about 23 pounds. I didn’t catch any little fish. I left the area about 10:30 and went to another area and caught a 5-pounder at 12:30 doing the same thing. At that point I pretty much checked out of my best areas.” 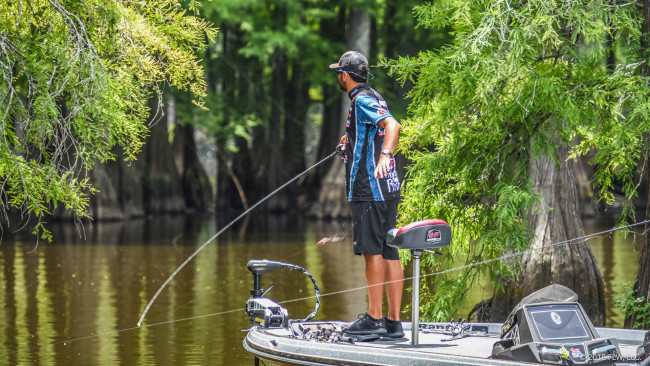 LeBrun is a local, but says he actually does not fish Cross Lake that much. Instead, he fishes the Cowboy Division (where he qualified for the All-American), and tries to keep up with the locals on Rayburn and Toledo Bend.

“I did spend some time here before the cutoff, putting in some extra time to refine things a little bit,” he adds. “One thing I do know about this lake is that it can really humble you. One day like this here is a nice start, and I’m thankful for it, but trust me, it can go the other way really fast. So a lot of my preparation here in pre-practice was about avoiding that second-day lull. Hopefully I’ve got some other things figure out here if I need them tomorrow.” 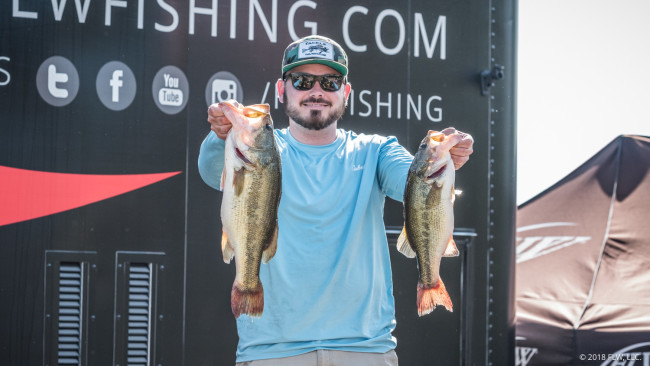 Jesse Parks, all the way from Avondale, Ariz., hauled in a limit weighing 16 pounds, 9 ounces to take the early lead in the co-angler division.

Parks caught his fish while sharing the boat with pro Ben Blaschke of Muldrow, Okla.

“It was a good day as far as execution,” Parks says. “I got six bites all day and put all six in the boat – and that’s huge.”

Parks says his goal much of the day was to fish finesse baits and soak them as long as he possibly could up next to the cover.

“I was fortunate to have a pro that was fishing slow enough to let me fish that way,” he adds. “I tried to pitch a little farther inside places and leave it there a long time.”