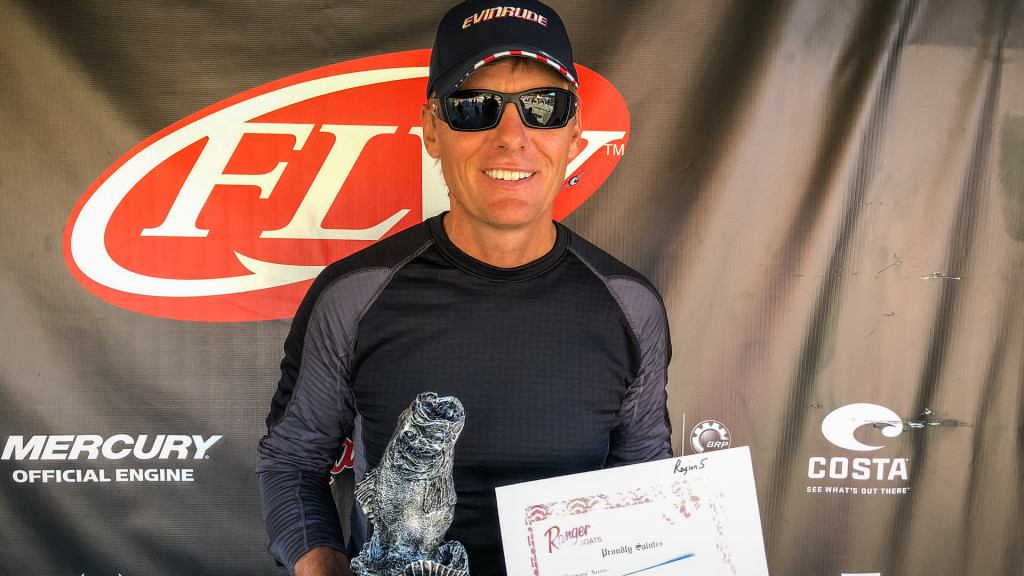 It’s been nearly 20 years since Mike Feldermann of Galena, Ill., has been to the T-H Marine FLW Bass Fishing League (BFL) All-American. Now, after sacking up 45 pounds, 4 ounces of bass to win the 2018 BFL Regional presented by Mercury on Lake of the Ozarks, he’ll finally make it back to the prestigious championship.

Feldermann has nearly 50 top-10 finishes with FLW, and almost all of them have come from the Mississippi River. While he has fished in the Ozarks a few times over the years, he’s fished just once on Lake of the Ozarks. That’s where falling back to his comfort zone helped out.

“I knew going into this tournament that Lake of the Ozarks is a topwater lake,” says Feldermann. “But I also knew, from years of fishing, that you can get your feelings hurt on any topwater bite. Between not getting bites and losing them, it can go bad fairly quickly.

“That’s why I threw a spinnerbait, because it’s what I always throw in the fall and have confidence in.”

Being a river rat, Feldermann opted to run about an hour up the Osage River, working through a 10-mile stretch of major creek arms and shallow main-river pockets.

“I’m a river fisherman, so I have to run up the river,” continues Feldermann. “It’s just my style and where I feel like I can do well.”

While the bite wasn’t hot and heavy, Feldermann dialed it in a little more each day. He focused on shallow docks in 2 to 7 feet of water, rolling his spinnerbait alongside the docks and catching fish suspended under them.

The Illinois boater only caught five keepers each day, noting that his limits consisted of three good-sized fish and two 15-inchers each day. He weighed 14-3 on day one and 16-14 on day two. Fishing was tough on day three, and he was one of just three top-12 anglers to catch more than 14 pounds, earning him the title and a $66,000 prize package to show for it.

Covering water was crucial to his win, and so was Feldermann’s bait. The winning setup was simple, yet perfected: a 3/8-ounce homemade spinnerbait on 17-pound-test Seaguar InvizX fluorocarbon with a low gear ratio reel.

“The spinnerbait was homemade and had a small Colorado blade,” says Feldermann. “It gets down in the water column faster, and it’s less affected by the wind, so my casts were more accurate. Another key was the 5:1 gear ratio on my reel. In these events, it’s easy to get revved up and fish faster, but the ratio helped offset that. I also threw a Living Rubber skirt because it moves a lot better than silicone in the water.”

Winning the tournament is great, says Feldermann, but making the championship is the real prize.

“I fished a pretty clean tournament,” he adds. “I lost a good one on day two that I thought was going to cost me a chance at making the All-American. Thankfully, it didn’t hurt me in the end, and I’m really happy to be going to the All-American.” 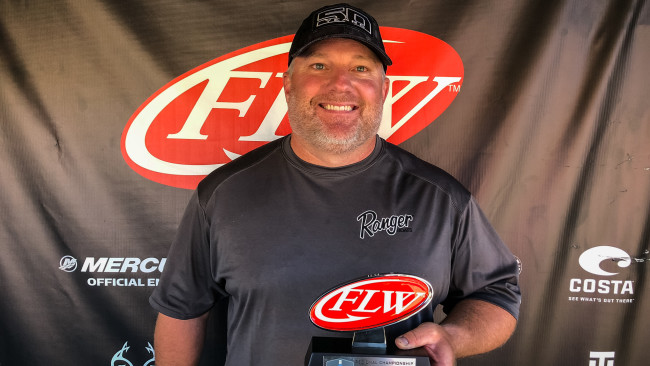 Bettering his weights each day, Wade Ramsey of Choctaw, Okla., kept a River2Sea Whopper Plopper in his hand to catch 43 pounds, 11 ounces on Lake of the Ozarks to earn not only $10,000, but also a trip back to the All-American.

Ramsey had fished a Regional on Lake of the Ozarks before, and had a bit of previous experience to lean on. After a so-so practice, he turned to the weather forecast for a bit of guidance.

“My practice was just OK,” he says. “I kept looking at the weather forecast, and it was calling for rain and clouds on days one and two, so I knew in my mind that the topwater bite the lake is known for would start to fire.”

Ramsey had a few rods rigged with either size 90 or 130 Whopper Ploppers in a variety of colors, which he threw on 25-pound-test Berkley Trilene Big Game monofilament. Targeting wind-blown shorelines along the main lake, Ramsey fished anything that got in his way – docks, bluff walls, laydowns, pea gravel or riprap.

“I covered a bunch of water each day,” says Ramsey. “I stood on that trolling motor all day and wound up with dead trolling motor batteries by the end of day.”

After catching a 6-pounder on the Whopper Plopper early on day two, things got tough. He switched over to a Strike King spinnerbait and Strike King 2.5 KVD HC square-bill to fill out his limit.

“Every day I felt like I learned a little more about my pattern,” he says. “I think that’s why my weights went up. Fishing the Plopper, spinnerbait and crankbait was really a good combination for me.

“Part of the reason I put down the Plopper on day two was because I knew if I had another good day I had a chance to make the top six [to qualify for the All-American]. I knew I could get some bites to fill out a limit with the crankbait and spinnerbait, so that’s why I made the switch.”

Lake of the Ozarks is known for heavy boat traffic, and Saturday the big boats were out in full force. Ramsey had to back off the main lake because it was so rough and called yet another audible.

“On the final day I caught three good ones early on the topwater out on the main lake before the boat traffic got too bad. It got crazy out there to the point I couldn’t fish effectively. I was in scramble mode. Around midday I ran to some pockets and tried to fish some of the same stuff I was on in the main lake. I knew from my friend and travel partner, Shonn Goodwin [36th place], that he was catching some in pockets, so that gave me the confidence to fish them. I pieced together my limit with the 2.5.”

Ramsey won the All-American back in 2005, but hasn’t been back since. Now, he’s got a chance at going two-for-two.

“The All-American experience was awesome, and I’ve wanted to go back ever since 2005. I’m thrilled and fortunate to make it back.” 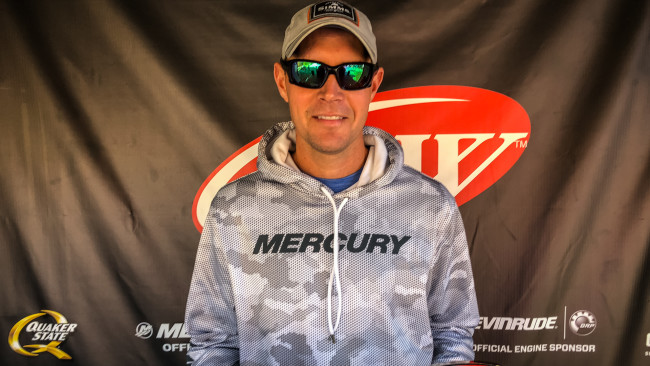 Johnson sticks with buzzbait for third

Hailing from Henryetta, Okla., Jeremy Johnson’s second BFL Regional tournament on Lake of the Ozarks went much better than his previous trip back in 2015, when he finished in the triple digits. This time, he caught 41 pounds, 14 ounces over three days and took home a $5,000 check for finishing third.

“On Tuesday [before the event] I got dialed on how the fish were setting up,” says Johnson. “The fish were right on the bank behind boat docks. Having a vertical drop bank, like a seawall or rock, and shade was also important. When I found that I could almost call my shot.”

Burning the bank isn’t a secret in the Ozarks, but Johnson looked much shallower than the rest of the field.

“It’s a pretty classic Lake of the Ozarks fall pattern. I just don’t think a lot of people were doing it,” he says. “The fish were extremely shallow with their nose almost on the bank. I’d cast on the shore and pull my bait in the water.”

Johnson kept a black buzzbait in his hand throughout the entire event. He originally had it rigged on 20-pound-test monofilament, but after breaking off a few fish on day one he switched over to 50-pound-test braid. A 6-foot, 8-inch or 7-foot Falcon Cara (medium-heavy or heavy action) baitcasting rod helped him sling the buzzbait back under walkways.

“I caught almost every fish down by the dam behind docks,” he says. “The water color down there is what I was looking for, and I probably caught 30 to 40 keepers each day.

“On the final day, after I caught my limit, I ran up the river and caught a 5 and a 3 1/2 in an area where I found big gizzard shad. I was trying to hit a home run, but only caught those two. But it was a good tournament. I absolutely love that lake.” 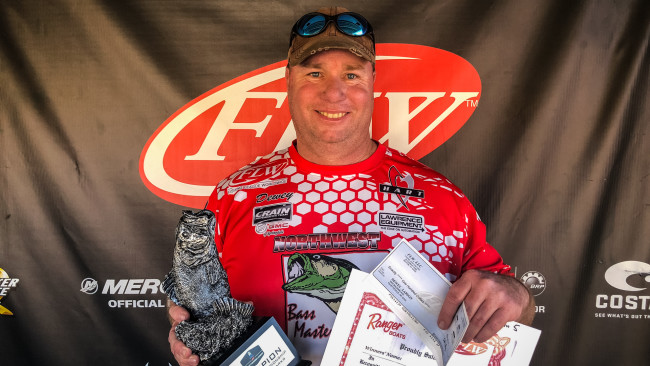 Larson by an ounce on co-angler side

Notching his seventh BFL win, Dewey Larson of Fayetteville, Ark., claimed the co-angler title by 1 ounce with a three-day total of 28 pounds, 1 ounce.

He started the event with a 10-11 limit to sit in fifth. On day two, with a 15-3 bag, Larson took nearly a 5-pound lead heading into Saturday. Things were much tougher on the final day, and he brought in only one keeper worth 2-3, but it was enough to earn the $45,100 payday.

The victory will also send Larson to the second All-American of his career.