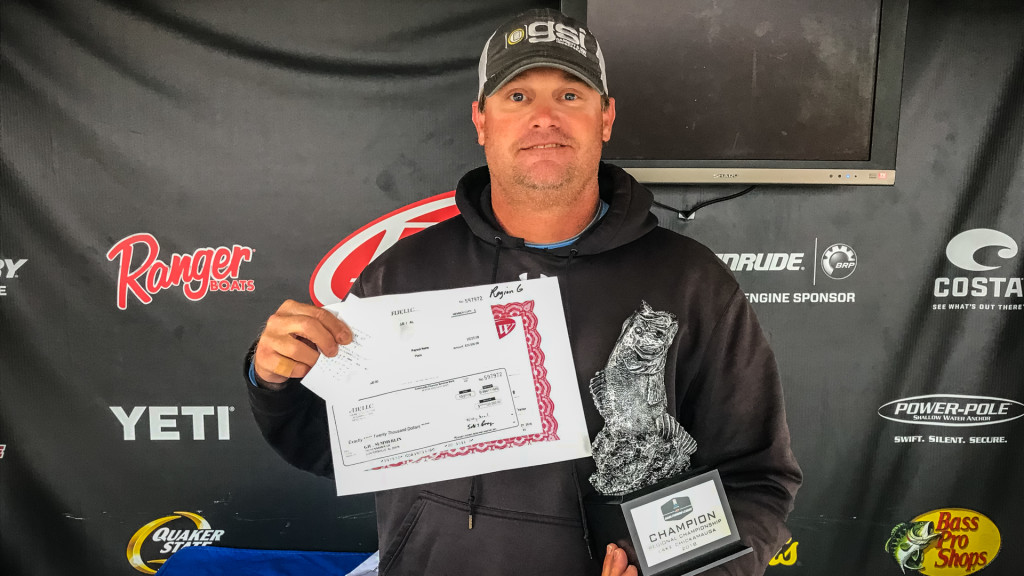 Gil Summerlin needed only a Fluke, a topwater bait and a few key areas to land 47 pounds, 3 ounces of keeper fish and secure a T-H Marine FLW Bass Fishing League (BFL) Regional win on Lake Chickamauga. He finished just 1 pound, 4 ounces ahead of Tennessee’s Matt Stanley, and it was all thanks to Summerlin’s approach of keeping things simple.

“First day of the tournament, I rolled up in there and caught one on a frog – my biggest one. She weighed, I think, 5-14,” Summerlin says. “After that day the frog bite just disappeared, so I just stuck with the Fluke and the walking bait.”

Summerlin fished a blue Zoom Super Fluke, rigged on a 5/0 wide-gap hook, but it wasn’t until partway through day one of the tournament that he even considered the Fluke to be his go-to bait to win it. After keying on a school that wouldn’t come up to bite his Strike King KVD Mega Dawg walking bait, Summerlin tossed out the Fluke to test the waters and entice those fish that remained subsurface.

“It was like a light switch went off in my head,” he explains. “I caught one about 3 [pounds], and my co-angler caught two. I had four out of there that day.”

Working around grass lines and in small pockets and indentations in the grass, Summerlin targeted just a handful of waypoints in a large bay, rotating from indentation to indentation. Each time he returned to one of his waypoints after having already caught a fish there, the area had seemed to replenish with more fish.

“I never left that bay. I ran down there, and when I cranked up I ran back to the launch.”

Summerlin did catch some fish on the Mega Dawg, but most of his key fish were caught on his Fluke setup. After trying a number of other moving baits in practice, including a jerkbait, he concluded that it was the erratic action of the Fluke that fish wanted more than anything else.

“It feels awesome,” Summerlin says of the win, and of the great month of fishing he’s had. “I’ve had a heck of an October. I can’t say anything bad about it. It’s just been one of those Octobers that I’ll never forget for sure. I’m beginning to love fall.” 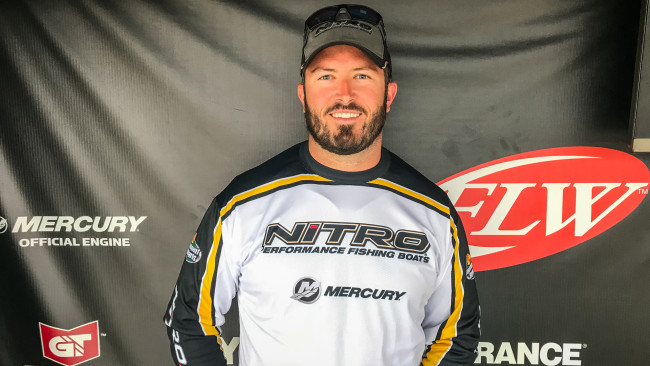 Tennessee native Matt Stanley has Chickamauga’s number. Unfortunately, it’s not the number “one.”

Stanley always seems to do well at the east Tennessee fishery. He has multiple second- and third-place finishes there across several tournament circuits. But the elusive victory still taunts and teases Stanley, and it all comes down to missed opportunities.

For Stanley, it all comes down to bad first days, and, in his estimation, inexperience and bad luck.

“Every time this happens, the first day of the tournament, I always lose a giant bag of fish, and the second and third day I do real good,” Stanley explains. “I think when you lose a bunch of fish, that comes from inexperience and bad luck. But 80 percent of it’s from inexperience. I figure eventually, one day, you get the wrinkles ironed out and you catch them.”

On day one at Chickamauga, Stanley hooked into a 4-pounder and a 7-pounder, both of which spit the hook. He still finished the day with a respectable 14 pounds, 14 ounces, but he knows those two fish made the difference between a second-place finish and that hard-to-get victory.

“I know for a fact if I’d have boated either one of them I’d have won,” he admits. “I should have started leading the tournament on the first day, and I should have carried it the whole way out.”

Stanley spent most of his tournament flipping grass, but he also mixed in a PH Custom Lures Huntin P square-bill crankbait and a Yo-Zuri 3DR Series Pencil walking bait, both in shad-imitating colors. All told, he caught a fairly even number of keepers on each bait, but his biggest bites came on his flipping setup, which consisted of an Xcite Baits Raptor Tail Junior in midnight flash, a 1 1/4-ounce Picasso tungsten weight and a 5/0 Gamakatsu EWG hook on 65-pound-test PowerPro braided line.

Two of his biggest bites, in fact, came from the same hole in the same grass mat.

“I was going down through there fishing, and I see the hole in the grass from where I caught the 4 1/2-pounder the day before,” he says. “I flip in there and nothing happens. So I almost go past it, but I looked back and pitched in there again in the hole, and I go to pull it out and it’s heavy. I set the hook, and it’s an 8-6.”

Stanley finished the tournament with a three-day total of 14 keepers for 45-15. 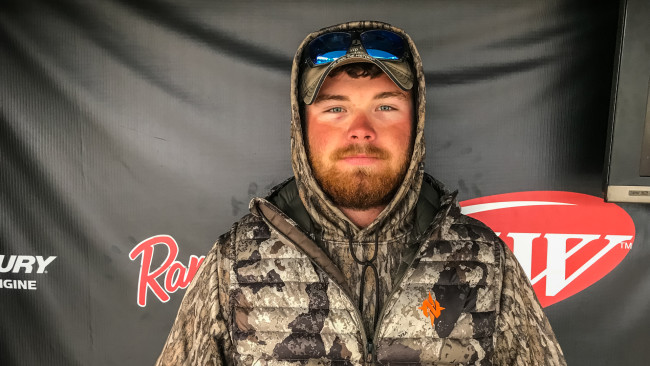 McCord leans on a ChatterBait for third-place finish

Illinois angler Brennon McCord only used two baits to pull 42 pounds, 14 ounces from Chickamauga, and while he did weigh in two or three fish per day on a Strike King KVD Mega Dawg, it was a 1/2-ounce Z-Man/Evergreen ChatterBait Jack Hammer that did most of the damage.

McCord used a Reaction Innovations Skinny Dipper in sungill as a trailer for his ChatterBait. He worked it overtop and along grass lines on the lower end of the lake on the main river, particularly along bars with submerged vegetation. By day three, when the water levels had dropped a foot or more, that topped-out grass produced even better for the 22-year-old, who has four top-five BFL finishes to his name in 2018.

“It was pretty tough in practice, but when I was fishing that grass out there, it was about a foot under the water,” he says. “I think they were dropping the water down, but the fish were coming to me. There weren’t that many fish there in practice. I saw a ton of fish when I fished there in the tournament. The grass was sticking out about two inches the last day, and I caught more fish that day when the grass was sticking out.”

McCord’s biggest fish of the tournament was a 4 1/2-pounder, which he caught on the ChatterBait, but he lost a couple key fish that could have made the difference between a third-place finish and victory.

Still, it’s hard to be too upset about hammering on big fish in the same spot with the same baits for three straight days.

“I knew I was around them,” he says. “I stayed in that one spot and never left. I can’t believe it produced, but it did.” 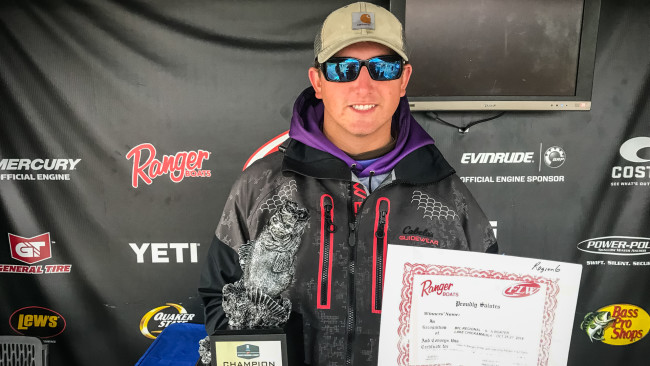 ChatterBait gets it done for co-angler Blasingame

If McCord’s productivity with a ChatterBait was impressive, what co-angler champion Lake Blasingame did with one was at least as remarkable.

Using a Z-Man/Evergreen ChatterBait Jack Hammer and a Zoom Super Fluke trailer, the Alabama angler boated 10 fish for a total of 26 pounds, 12 ounces, edging out Mitch Murphy by just 2 pounds, 5 ounces. It was the 22-year-old’s first BFL victory after finishing his YETI FLW College Fishing career earlier this year.

“I had my biggest bag of the tournament the first day with 12-7,” he says. “I knew if my boaters were fishing around grass, I felt like I could probably catch some fish behind them on that ChatterBait. I felt comfortable with what I was doing and how I was catching them. That made me feel good, fishing behind those guys, because all three of them were great fishermen.”

Blasingame expected to do a good deal of frogging and flipping during the tournament, but after practicing both tactics during the week leading up to the derby with his college partner, Triston Crowder (34th-place boater), he realized that perhaps neither technique would be the winning approach from the back of someone else’s boat.

“We frogged and punched a lot during practice,” he explains. “We got a lot of bites frogging, but not many flipping. I knew coming in as a co-angler I couldn’t depend on frogging because guys [boaters] do different things. I was prepared to fish however they were going to fish.”

The frog bite all but dried up across the board by the time boats launched on day one, but Blasingame’s ChatterBait was enough to fill the void fishing around grass. He fished a clean tournament as well, only losing one fish (on day three). And while he also broke off what he thinks was a monster that same day – and expected those two fish to sink him at weigh-in – a 5-pounder early in the day ultimately sealed his victory.

“I drew three excellent boaters; all class act guys,” Blasingame says. “They were around fish, and I was able to catch some behind them. I was really fortunate.”