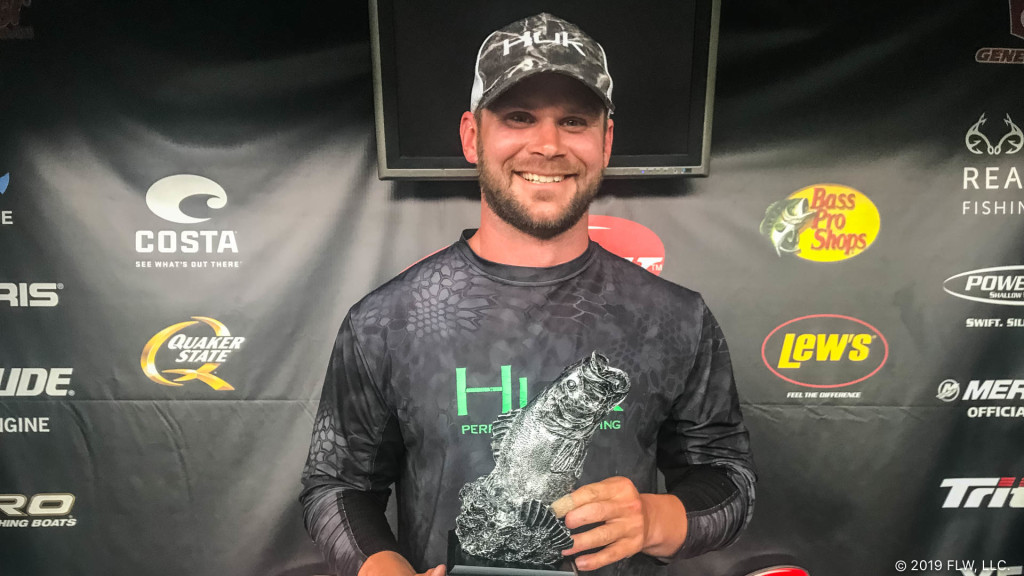 Adam Boehle of Warrenton, Missouri, caught five bass Saturday weighing 20 pounds, 12 ounces, to win the T-H Marine FLW Bass Fishing League (BFL) tournament on Lake of the Ozarks. Boehle pocketed $4,938 for his win in the event presented by Navionics and 250 points in the Ozark Division presented by Bassing Bob standings. The winner of the division’s Angler of the Year title after five tournaments will win $3,000.

“The competition in the Ozark Division is some of the best in the nation and to just compete alongside these guys is an honor, but to actually win is quite the feat,” says Boehle, who earned his first career BFL victory. “It definitely feels real good and I’ll be thinking about this tournament for awhile.”

Boehle fished from the Glaize Arm of the lake to the dam, throwing a ¾-ounce green-pumpkin-colored Crock-O-Gator Reaction Jig with a Strike King Rage Bug, a 5-inch shad-colored Zoom swimbait and a gizzard shad-colored 6th Sense crankbait.

“I was keying on the shad spawn in the morning, then switched to points,” Boehle says. “I think I had 12 keepers throughout the day, with the majority coming on the swimbait. I made a bait change mid-morning and caught two big ones on the crankbait. I still needed a kicker, so I went flipping with the Crock-O-Gator jig and caught my biggest of the day, a 5½-pounder.

“I need to make sure to give credit to Jim Dill, owner of the Crock-O-Gator bait company,” Boehle went on to say. “My jig order didn’t come in before the event, and Jim was fishing in this event. He hooked me up with a couple of jigs, no big deal. That jig was what I caught my kicker on and turned out to be what won me the tournament.”

Wes Proctor of Manhattan, Kansas, caught a 6-pound, 3-ounce bass – the heaviest of the event in the Boater Division – and earned the day’s Boater Big Bass award of $745.

Ward caught the largest bass in the Co-angler Division, a fish weighing in at 5 pounds, 10 ounces. The catch earned him the day’s Co-angler Big Bass award of $367.