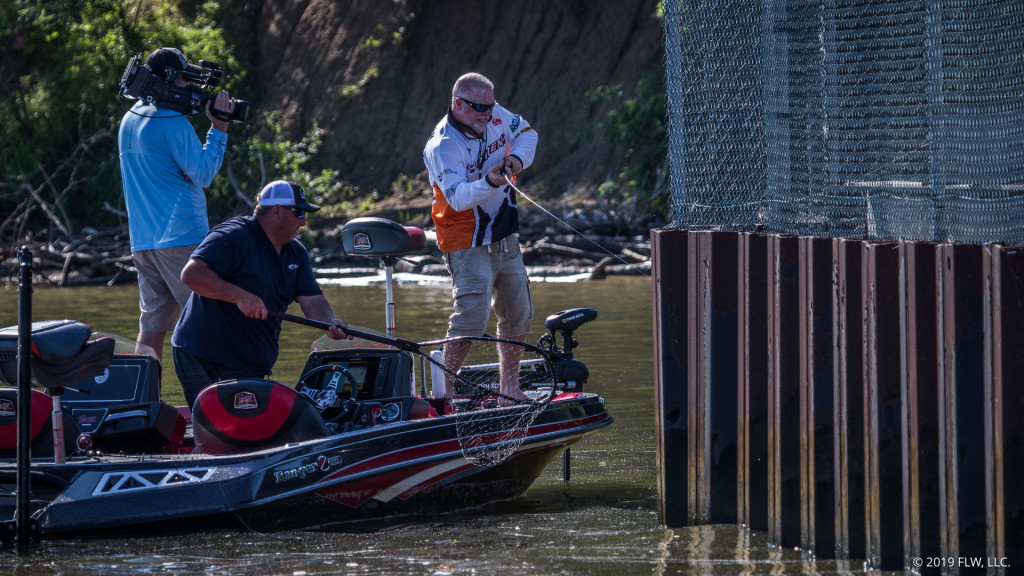 So far, day two of the T-H Marine Bass Fishing League (BFL) All-American has been a lot like the first. With FLW Live rolling, there have been plenty of catches, but the Potomac River still isn’t showing out quite like usual. Still, it looks like there will be plenty of drama at weigh-in and on the final day of the event.

Sunny and hot again, there has been a little more of a breeze on the water today, but that’s about the only change. It is a little cooler, but not enough to really impact the fish one way or another. With the tide being an hour later today, the anglers have had more falling tide to fish, and the afternoon window of incoming tide will be shorter. A lot of anglers did really well on the incoming tide on day one, so that’s something to consider.

This event, which is presented by General Tide, features the FLW Live Leaderboard, and that pretty much tells the story of the day. Ken Garbe has had by far the best day, boating nearly 18 pounds, but he only weighed four fish on day one. Ryan Bauman has also had a really good day, with more than 14 pounds to his credit and a 4-pounder he caught bright and early.

Of the folks who started up top, Joseph Thompson is predictably doing well again. He hasn’t caught too many fish today, but most of them have been good ones, and he culled with a 4-pounder just after noon. Doug Ruster is also ticking along steadily again – he started slow, but has four for 11 pounds now. There’s plenty of time left, of course, but unless things change, it looks like Thompson will take a pretty solid lead into the final day.

Again, much like day one, a variety of patterns have been successful. Thompson has fished grass and a lot of hard targets. That mix has done well across the rest of the field as well – hard cover is probably the way to go right now, but it isn’t a wide gap. There are enough folks catching fish in the grass that you can’t totally discount it.

Weigh-in starts at 3:30 p.m. ET, and the field will be cut to the top 10 pros and co-anglers for Saturday. There are gonna be some good fish to see, so be sure to tune in.