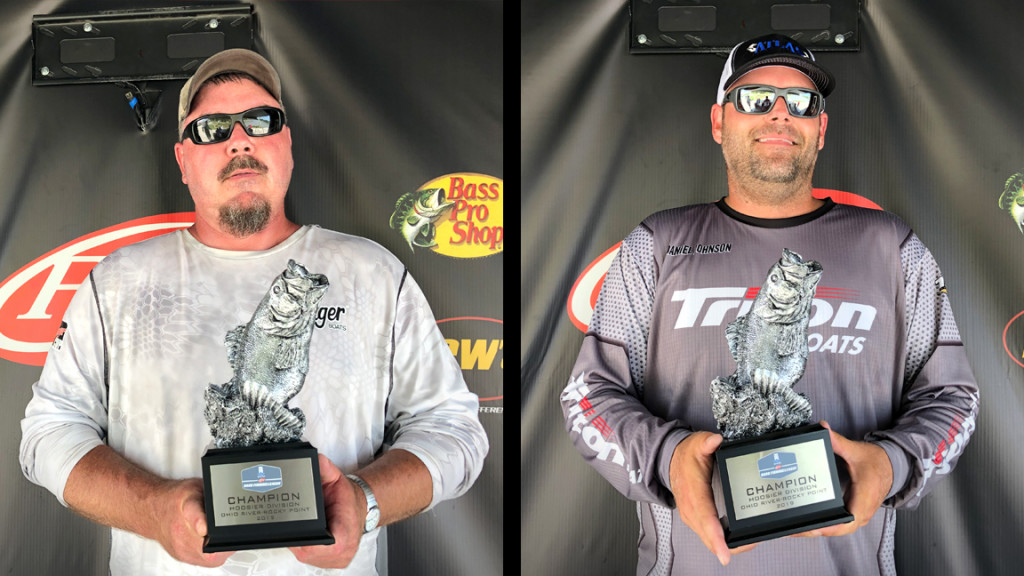 Chris LeClere of Cannelton, Indiana, and Daniel Johnson of Lebanon, Tennessee, both brought a weigh-in bag to the scale Saturday totaling 9 pounds, 9 ounces, to tie for the win at the T-H Marine FLW Bass Fishing League (BFL) Hoosier Division event on the Ohio River. With his Ranger Cup contingency LeClere was the big winner, taking home $4,061, while Johnson earned $3,511 for his efforts.

“I caught all of my fish flipping craws and brush hogs in the back of a creek,” says LeClere, who also won the BFL event on the Ohio River at Rocky Point last year. “I caught 11 fish, but I only had four keepers. I did have one good one come off on me. I was fishing mostly channel stumps and laydowns.

“To win back-to-back on my home waters feels good,” LeClere went on to say.

“I had never been to the Ohio River before, but when I showed up to practice and saw that it looked very similar to my home waters of Old Hickory Lake, I knew I was going to like it,” Johnson says. “I caught everything in Deer Creek – one on a buzzbait, everything else came flipping.”

Johnson says his big fish of the day came on the buzzbait, white with a 5-inch swimbait trailer. When flipping shallow wood he used a green-pumpkin-colored Reaction Innovation Sweet Beaver, and while flipping lily pads he chose a green-pumpkin Berkley Havoc Pit Boss.

“The morning bite was key,” Johnson says. “I got in a good rotation and got to fish a lot of fresh water and get some good bites. There was a lot of pressure in the creek and after the first hour it really slowed down.”

Campbell caught a 4-pound, 14-ounce bass – the heaviest of the event in the Boater Division – and earned the day’s Boater Big Bass award of $305.

DeHart caught the largest bass in the Co-angler Division, a fish weighing in at 4 pounds, 14 ounces. The catch earned him the day’s Co-angler Big Bass award of $152.

The top 45 boaters and co-anglers in the region based on point standings, along with the five winners in each qualifying event, will be entered in the Oct. 17-19 BFL Regional Championship on Kentucky Lake presented by Evinrude in Paris, Tennessee. Boaters will compete for a top award of a Ranger Z518L with a 200-horsepower outboard and $20,000, while co-anglers will fish for a new Ranger Z518L with a 200-horsepower outboard.