Stormy and wet conditions kick off the event 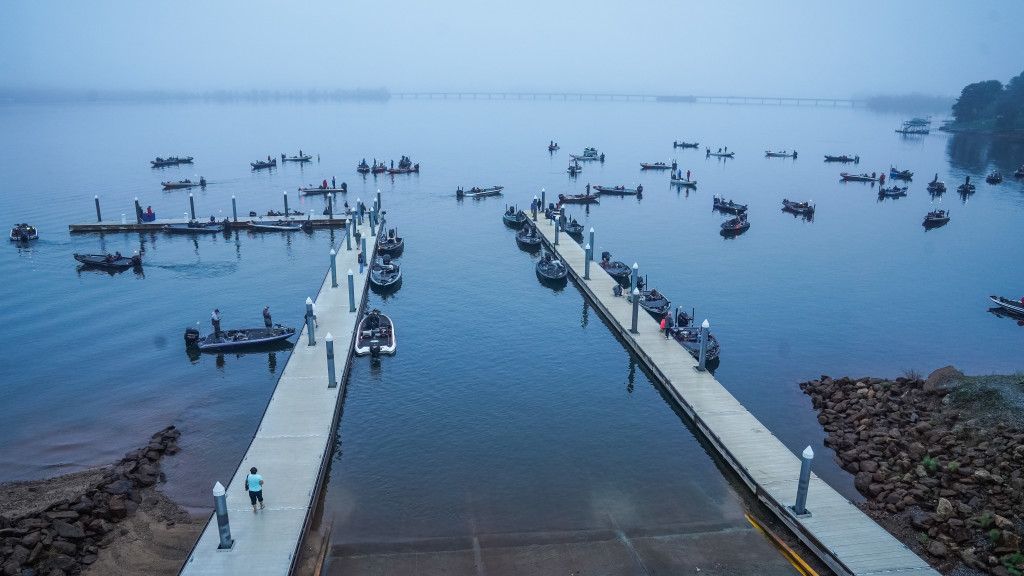 Day one of the Phoenix Bass Fishing League presented by T-H Marine All-American presented by TINCUP is going to be a wet one. Overnight, a wad of rain and storms moved into the region around Lake Hartwell, and it’s projected to stay wet all the way into Thursday morning, with almost 2-inches of rain in the forecast for today. That rain isn’t what some would like for the fishing, but it’s not going to dampen the competition for the title of All-American and the top prize of $100,000. 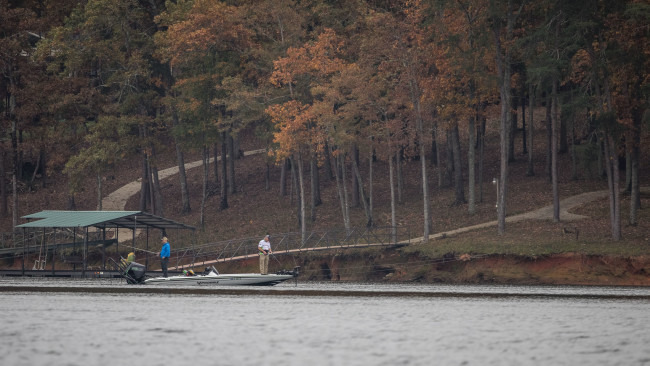 Built on the Savannah, Tugaloo and Seneca Rivers on the border of South Carolina and Georgia, Lake Hartwell is a fairly typical example of a Southeastern spotted bass and largemouth fishery. Hartwell can be thought of as some sort of cross between a place like Lake Murray and Lake Lanier, with a more even species mix in tournaments than largemouth-dominated Murray and spot-centric Lanier. Though there are shad and bream, the primary forage is blueback herring. At 56,000 acres, the lake will give the All-American competitors plenty of room to roam, and it shouldn’t fish small at all.

There’s very little grass in Hartwell, but it has all sorts of other cover that ranges from cane piles, brush piles and docks to rock and flooded shoreline vegetation like willow bushes and dog fennel. Typical fall fishing on Hartwell would put a lot of fish off the bank, either on humps and points or cane and brush. 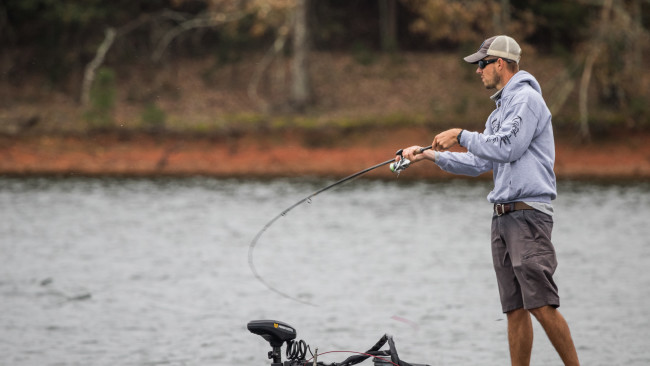 One storyline to keep an eye on this week will be the water level. Typically, Hartwell is drawn down somewhat in the fall, exposing even more of the long, Carolina-style clay points and concentrating fish offshore. This time around, that’s not going to be quite the case – currently the lake has dropped about a foot over the last week, but it is still over full pool. Today’s rain may well get it rising again, and the higher-than-normal water could give folks plenty of interesting options.

As for the actual fishing, it sounds like the offshore cane pile bite is still in play. John Garrett finished 21st in the recent Bassmaster Open on Hartwell fishing cane, and he tested it out again on Tuesday’s practice day.

“It seems like the fish are a little farther along into the fall or winter stage,” says Garrett. “I don’t know if it’s because it’s cloudy, but [Tuesday], they weren’t really in the cane, they were around it. Kinda on secondary stuff and more spread out and chasing bait. When I was here for the Open, they would be in really tight groups around the cane. Today, I noticed you could get in a 50-yard area and there would be a lot of fish spread out around the area.”

Still, the offshore cane bite may not be as straight ahead as folks would like it to be. In 2017 on Lake Murray, Justin Atkins dominated the Forrest Wood Cup fishing a topwater over cane, and really everyone in the top 10 did it to a degree. Bradford Beavers finished 11th in that event, and last year he won a BFL Super Tournament on Hartwell, so theoretically, he should be well-positioned to take advantage of it.

“For me it hasn’t been similar to last year when I won the Super Tournament,” says Beavers. “I caught ‘em all on topwater in that tournament, and the topwater bite has been terrible for me. When I was here and I caught ‘em in that Super Tournament, they were biting on topwater. You could catch them everywhere you went throwing topwater, all you had to do was figure out where the better-quality fish were, the 3-pounders. I haven’t found that at all now, there are fish in every single brush pile, but I think it is very hard to find the good fish.”

Jayme Rampey, the preeminent local in the field, isn’t going to start offshore, though that is certainly in his arsenal. Still, he thinks the lake is fishing well in general.

“I’m gonna try to catch largemouth tomorrow, in the morning,” says Rampey. “If it fails, I’ll bail out, try and survive and then go with it from there. The lake is fishing pretty decent, a lot better than I thought it was going to be. It could be because of the hurricane coming, but it’s a little better than typical. They probably won’t bite tomorrow, but [Tuesday] they were anyways.” 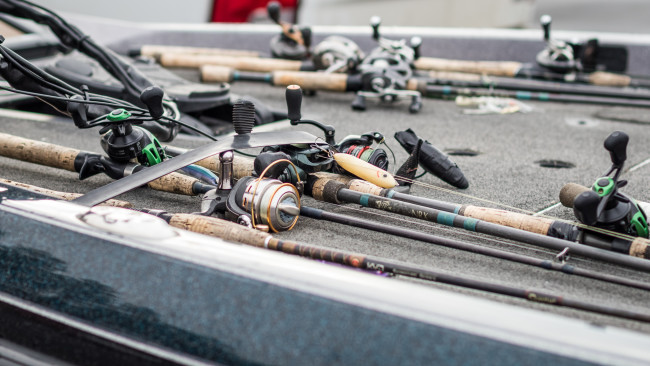 On the offshore side of things, a drop-shot will be the best numbers bait, but any number of others could play. Swimbaits, flukes and topwaters are time-honored brush and cane pile baits, and underspins always catch bass in the Carolinas. 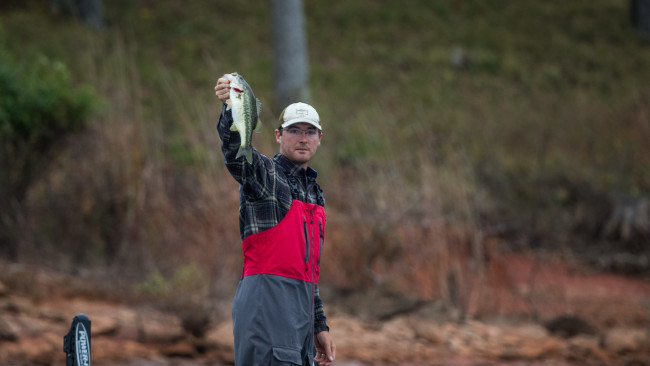 There are enough folks saying that the lake is fishing well that it’s reasonable to expect better weights than we saw in last week’s ABA Ray Scott Championship. Bradley Durden won that event with less than 12 pounds per day, but things are looking up now.

Rampey thinks that 15 pounds a day will be winning mark.

“It’s a small field, very good fishermen, and we’re during the week with no boat traffic,” says Rampey. “That’s what I’m basing it off.”

Garrett is of the same mindset.

“They bit pretty good [Tuesday], the fish were active,” says Garrett of his one practice day. “If you got around some, you could see them breaking and chasing bait on the graph. I don’t know if it’s a pre-frontal bite, or if they’re going to bite tomorrow, but they bit [Tuesday].”

Dennis Berhorst is fishing his eighth All-American and thinks that 13 to 14 pounds a day will do the trick.

“I have some schools of [spotted bass] offshore that I think I can catch fairly easy,” says Berhorst. “I checked one of them and I caught one close to 2 pounds on my first drop and didn’t drop back down again. I think guys that can figure out how to catch a few of those big largemouths and have a few solid spots will do well.”