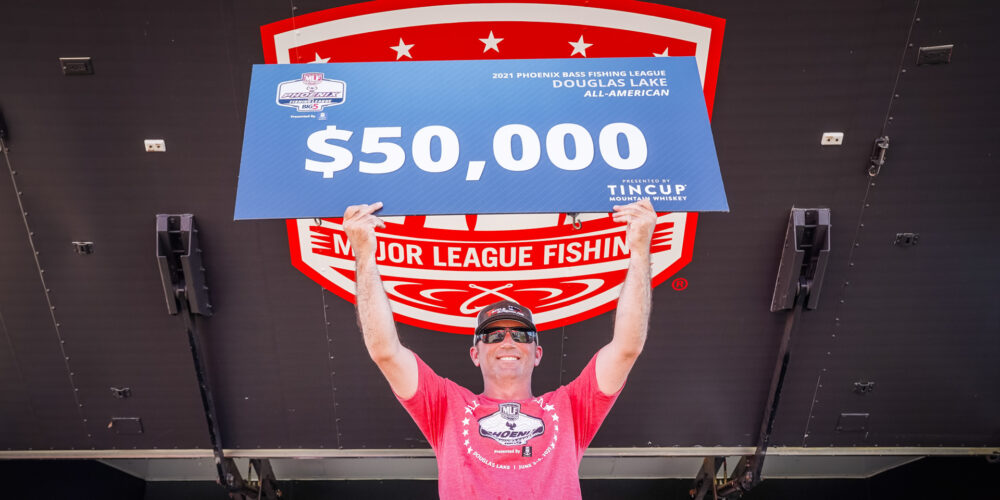 Daniel Buswell Jr. has proved just about everything there is to prove at the Strike King co-angler level. With his win at Douglas Lake in the Phoenix Bass Fishing League Presented by T-H Marine All-American, he becomes the first co-angler to win two All-Americans, and with that distinction, he’s demonstrated to himself that he’s ready to try some new things.

“I feel like I’m ready to be up front (as a boater),” Buswell says of his future in the sport. “It’s time. It’s just a matter of doing it.”

Funnily enough, Buswell has always said he’d make the jump to the front deck when he wins a boat. Instead of a boat, he just won $50,000 to go along with his previous $50,000 payday in the 2013 All-American at Nickajack Lake. No boat, no boater – at least not yet. He still intends to win that boat at the 2021 Toyota Series Championship, for which he qualified with his All-American win.

“My mindset is: go in, win that boat and go boater next year,” he says.

Buswell has the confidence to pursue that goal because of how much he’s learned since he first started fishing tournaments back in 2011. He may not have admitted it at the time, but he had plenty to absorb, practice and understand before he was ready to repeat his All-American heroics.

“Back then (in 2013), it was my first full year,” he explains. “I went in and I won, but now I realize how hard it is to get here again and to win it again. This time it means so much more, really. I never fished bass tournaments until 2011. I came in halfway through the season and then fished in 2012 and came to the All-American and now I just have so much more experience and I used everything I’ve learned to win this one.”

To illustrate his point, Buswell mentions having a stellar shallow-water angler in front of him on Day 1 in Michael Deen, who weighed 11 pounds to finish the day in 23rd place. Buswell was able to sack up 8-11 of his own to remain within striking distance of the cut line – an outcome that proved to be fateful based on what happened the next two days.

“The first day of the tournament was tough,” he admits. “I had a 7-pounder roll on my swim jig and then I had a big one get off on my frog. I really could have had a big lead and I’m glad I didn’t because I went out with the right guy today to catch them.”

Buswell was paired with second-place boater Leslie Brandenburg on Day 3. The two fished shallow in the mid-lake area, and while Brandenburg was drawing big Douglas Lake largemouth to the surface with his glide bait, Buswell was striking out for most of the morning. At one point (before the pair changed spots), a 4-pound largemouth with some very distinctive markings showed itself to Brandenburg without getting any hooks. That fish apparently wasn’t going anywhere.

When they returned to that spot later, Buswell had a fish blow up on his frog and miss. He picked up a wacky-rigged Yamamoto Senko, put it in front of the fish and set the hook. It turned out to be the 4-pounder they’d seen earlier and the fish that not only anchored Buswell’s bag but also clued him in to what he should be throwing.

“It was tough,” he says. “With no wind, it’s a typical summertime thing. I just thought of John Cox fishing up underneath trees.”

From then on, it was all about the wacky rig for the Fayetteville, Georgia co-angler, and he finished the day with 10 pounds, 12 ounces of bass for a total of 34-2 and the win.

Buswell’s dreams of winning a boat aren’t too far from staring him in the face. The 2021 Toyota Series Championship is on Pickwick Lake – a fishery he’s all too familiar with having done well in all three tournaments he’s fished on the Tennessee River impoundment.

“I really wanted to fish [the Toyota Series Championship] bad because it’s at Pickwick,” he adds. “The Tennessee River has been very good to me.