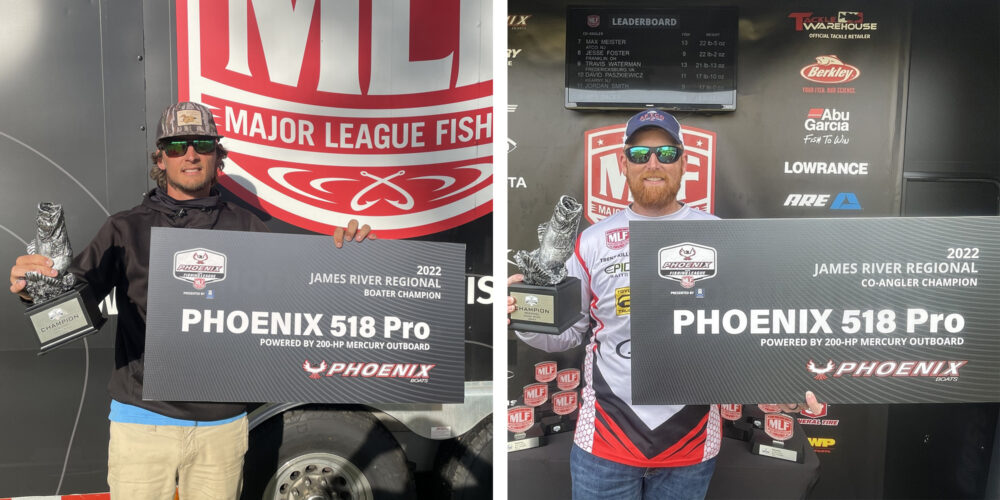 RICHMOND, Va. – Boater Cody Casey of Chester, Virginia, brought a three-day total of 15 bass to the scale weighing 39 pounds, 10 ounces, to win the Phoenix Bass Fishing League Presented by T-H Marine Regional Tournament on the James River in Richmond, Virginia. For his victory, Casey earned $60,000, including a new Phoenix 819 Pro bass boat with a 200-horsepower Mercury outboard and $10,000. Casey also receives an automatic entry into the 2023 Phoenix Bass Fishing League All-American Championship, May 31 through June 2, at Lake Hartwell in Seneca, South Carolina.

“There was a shad spawn going on, but there was so much bait in the water, the bass weren’t biting a crankbait like they usually do this time of year,” Casey said. “I throw a drop-shot year round, and I had flipped a drop-shot around during practice and was getting bit, so I figured it would be my key bait.”

Casey said he started his days by fishing wood in creeks while the tide was low, then fished current breaks and jetties with the drop-shot rig, as well as an Evergreen Flat Force 4 crankbait. Casey said he also stopped at riprap banks on his way back to Richmond every day. Casey said his efforts paid off with 30 keepers the first day and 10 on the second day of the tournament.

“I had 30 minutes to go on the last day and caught one close to 5 pounds,” Casey said. “I thought in my head that I had a good shot at winning then. And then at my last spot I caught another keeper that culled me up. At that point, I knew I had a real chance, and I couldn’t keep my emotions in check.

“I’ve fished my whole life and never accomplished something this big,” Casey said. “I’m still just messed up about it. I haven’t slept the last four days.”

Atwell took home an extra $500 as the highest finishing Phoenix MLF Bonus member. Boaters are eligible to win up to an extra $7,000 per event in each Phoenix Bass Fishing League tournament if all requirements are met. More information on the Phoenix MLF Bonus contingency program can be found at PhoenixBassBoats.com.

The top four Strike King Co-anglers from each division that earned a $1,000 bonus for placing highest in the event were:

The Phoenix Bass Fishing League Presented by T-H Marine Regional Tournament on the James River was hosted by Richmond Region Tourism. It featured the top pros and Strike King co-anglers from the Northeast, Shenandoah, Buckeye and North Carolina divisions.

The top boaters and Strike King co-anglers plus tournament winners from each Phoenix Bass Fishing League division will also earn priority entry into the Toyota Series, the pathway to the Tackle Warehouse Invitationals and ultimately the Bass Pro Tour.