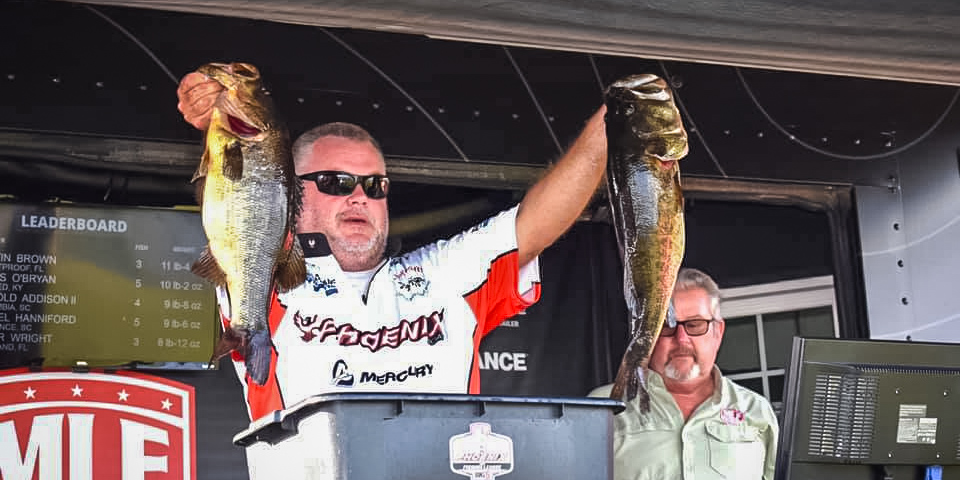 PALATKA, Fla. – Tallying 33 pounds, 12 ounces on Day 1, David Lowery hit the ground running in the Phoenix Bass Fishing League Presented by T-H Marine Regional on the St. Johns River. With 16-15 and 12-4 on subsequent days, Lowery held on to win with a 62-15 total. For his win, he took home a new Phoenix boat, plus $18,000 and contingency winnings as well as a berth in the 2022 All-American.

A Service Technician for Air Concepts of Middle Georgia, Lowery says he didn’t have a very good practice. But he kicked things off pretty quickly on Day 1.

“When we took off that first morning, I stopped real close to the ramp, and I caught one about 2 pounds, and it just calmed me down,” Lowery said. “So, I ran down to a spot just north of [Lake George] and I lost one about 2 pounds.

“I got bent out of shape for a minute and trolled about 50 yards down the bank and I threw up against a seawall and twitched it and I caught that 8-pound, 6-ounce fish on a frog,” Lowery said. “So, that has a tendency to calm you down quite a bit. There was a dock in my way, I went around the dock and got back on the seawall, and I caught my first 6-pounder. So, within a 25-yard stretch, I caught an 8 and a 6.”

After busting two giants on a frog, Lowery kept it rolling, running to another couple of seawalls and putting a 3-pounder and another 6-pounder in the boat on the frog. Then, he decided to practice some.

“It didn’t work out, and I saw a buddy of mine, and he stopped and asked me what I had and I told him,” Lowery said. “He had one 3-pounder, he said ‘Whatever you’re doing, you need to keep doing it.’”

So, Lowery got back to business, running north again toward takeoff.

“I pulled up, within sight of the boat ramp, and I threw a frog up against a cypress tree and another 6-pounder eats it,” he said. “At that point, I was just dumbfounded – I didn’t believe it was happening. So, I culled my 2-pounder, and a 3-pounder was what was left to cull.

“I went right around the corner, to a little creek, and the current was going through there, so I threw a frog on the point and twitched it one time and another one came up and ate it. It was another 6 ½, and I had an hour and 45 minutes left to fish. So, I just gave my co-angler my frog rod and got a bag of beef jerky and a Gatorade and stood on the front deck and ran the trolling motor for him.”

For Lowery, it was the first time he’d ever caught 30 pounds in a tournament.

“That was pretty wild,” he said. “I ain’t gonna lie, I’ve been fishing a long time, I don’t know that I’ve ever seen 33, almost 34 pounds caught in October. I’ve caught 29 a couple of times down at Lake Eufaula, so, I’ve caught 28 and 29 pounds several times down there in tournaments, but I’ve never broken 30.

“I had some help, Thursday was the day my dad died of lung cancer in 2016, and Sunday would have been his birthday,” Lowery said. “I’m not a superstitious kinda guy, but my dad was my team partner from the time I was 5 years old to the day he died. When you can have eight bites on a frog, and you catch five of them that weigh 33-12, you might have had some divine intervention riding with you.”

After Day 1, Lowery wasn’t alone at the top, and Mickey McHenry had also cracked 30-3, but Lowery kept the ball rolling better.

“The second day, I ran all the way down to George, and I caught a couple of small ones,” he said. “I pulled up to a dock with an amazing current break on it, and I flipped a jig up to it and saw my line swimming out to deep water and it was a 6-pounder.”

Still, 6-pounder aside, his seawalls weren’t paying out. So, Lowery ran back north toward takeoff and started to work on a stretch with laydowns, cypress trees and other wood cover.

“The tide was still out, so I spent a lot of time getting un-stuck on stumps,” he said. “But, I spent that whole time up there around takeoff, and that’s where I caught 16-15. I alternated some that day, I threw the frog, and a Big Bite Baits Tour Toad Buzzbait.”

On the final day, things tightened up a bit for Lowery, but he still limited out.

“I started the morning at the boat ramp, I went right there and started fishing,” he said. “I knew the tide was going out, and it wasn’t going to come back in. So, we went down that stretch, and I had a 3 1/2, a 2 1/2 and two good keepers. Then, I ran down almost to George again, because you gotta go fish that seawall you caught an 8 and a 6 on every day.”

Coming up empty again on the seawalls, Lowery rolled back north toward Palatka and got to work looking for his limit fish.

“I came back up, and I just started flipping blowdowns on the river,” he said. “My co-angler caught a 5-pounder, and I ended up catching a 2-pounder, which was the fish that probably won it, it would have been really tight without that fish.”

A veteran of the Bulldog and Bama Divisions, throwing a frog all day to non-standard cover is an old hat for Lowery. On the week, the bulk of his weight came on a SPRO Bronzeye Poppin’ Frog 60 in either killer gill or rainforest black, with killer gill being the best bet. For his frog rod, he used a Kissel Krafts Custom Rod in 7-foot, 3-inch, heavy model with 65-pound P-Line TCB braid. He also caught some key fish on a homemade flipping jig, tied with living rubber and sporting a Big Bite Baits Kamikaze Craw trailer.

The win was Lowery’s seventh with MLF, and his second Regional win.

“After my dad died, I took four or five years off,” Lowery said. “I fished some local stuff around the house, but I just didn’t travel. It didn’t feel right, I was hard enough to fish locally without him. It took a little while to get over him not being there to talk to, so this was my first year back fishing the BFLs in a while.

“I was incredibly calm all day until my co-angler caught that 5-pounder behind me, and then I started worrying it wasn’t enough,” he said of the final day. “You know catching 33 pounds, you’re not going to back that up. But, I put double digits on the board every day, and everybody rides down there for the All-American. I had about a 15-pound lead on sixth place, so I knew I just had to catch two or three fish and I was going to the All-American. So, that helped a lot – this will be my fourth All-American. They’re special events, they’re hard to make.”