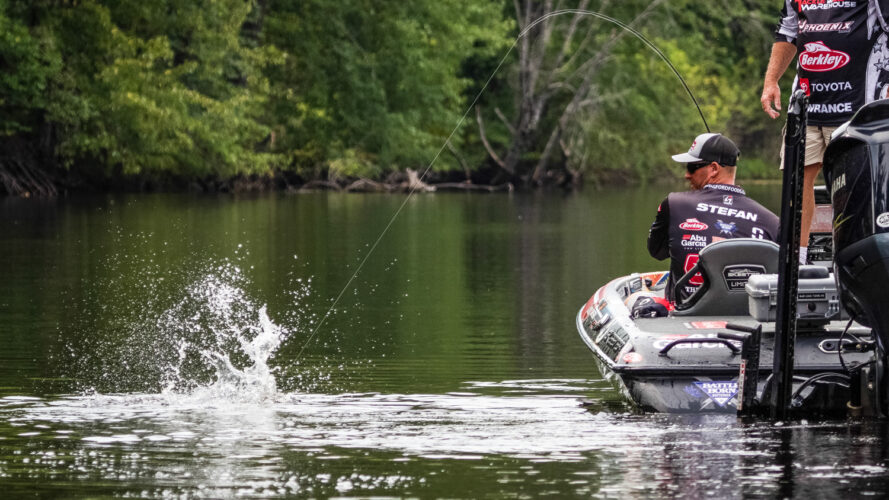 The 2021 Phoenix Bass Fishing League Presented by T-H Marine Great Lakes Division continues June 12 at the Wolf River Chain of Lakes out of Winneconne, Wisconsin, for the second stop of the season. One of the most varied locations BFL events regularly run out of, there are a ton of interesting rivers and lakes in play.

Winnebago is the deepest body of water on the chain (with a maximum depth of 21 feet) and fishes like some of the larger Northern smallmouth fisheries in that anglers can find good concentrations of smallmouth bass offshore. Other lakes on the chain offer some similar opportunities, but Winnebago is your best bet for finding schools of smallmouths.

Butte des Morts and Winneconne are significantly shallower (with average depths of 9 and 6 feet, respectively) and smaller than Winnebago, though they do offer some unique opportunities in the form of grass, riprap and other target-oriented cover and structure.

In the rivers, there’s no shortage of current eddies to target, along with plenty of backwaters with even more grass and natural cover.

A veteran of Wisconsin’s varied inland rivers and lakes, Tackle Warehouse Pro Circuit pro Matt Stefan says that almost everything will be on the table for this event.

The sprawling and diverse nature of the fishery doesn’t make it super easy, but Stefan thinks it makes it a good tournament destination.

“It’s a great tournament fishery because of the size, and there’s a lot of strategy that goes into picking a location,” Stefan says. “You can’t do everything, you can’t sample. There’s a lot of decision-making that goes into it, which from a tournament standpoint is part of the game. Plus, the area is pretty cool, Oshkosh and Appleton are cool towns and there’s plenty for the family to do.”

From a strategy standpoint, Stefan likes the idea of going for the win with smallmouths.

“If it were me, I would be trying to find some smallmouth on Lake Winnebago. They’re going to be around the spawn, but the last couple years, the Winnebago smallmouth have really come back on,” says Stefan. “The largemouth throughout the system will play anywhere. The largemouth are the easiest and safest play right now, but it can be harder, in my opinion, to hit the top weight with largemouth.”

Whatever happens, it could be a banner year for the Wolf River and the surrounding water.

“It’s fishing good this year, there have been several recent team events with good weights,” says Stefan. “From what I’ve seen so far this year, it’s really fishing good, so the weights might be better than normal.”

Despite all the different location options, how anglers actually catch fish shouldn’t be too fancy – a lot of northern staples will play.

“The largemouth are shallow-water power fishing,” Stefan says. “A Dirty Jigs Swim Jig is a great bait out there, and a Berkley PowerBait MaxScent The General or a soft stick bait is a huge deal there. The fish are still going to be close to their spawning areas, so backwaters, shallow pad fields, those are going to play. What I like to do is cover water with a swim jig, find some fish, and then slow down with a wacky rig.”

In Winnebago, Stefan figures quite a few of the smallmouths will still be on beds.

“From a smallmouth standpoint, if you’re chasing spawning fish, you probably won’t be able to see them on Winnebago,” he says. “So, it’s more blind fishing – dragging stuff and crankbaits are the two things out there.”

In the rivers, Stefan thinks that anglers won’t need to mess with the main channel too much, and can instead look for productive backwaters.

With so many options on the table, it’s sure to be another good tournament and one more crucial step toward putting up points for the Regional this fall on Lake Ouachita.