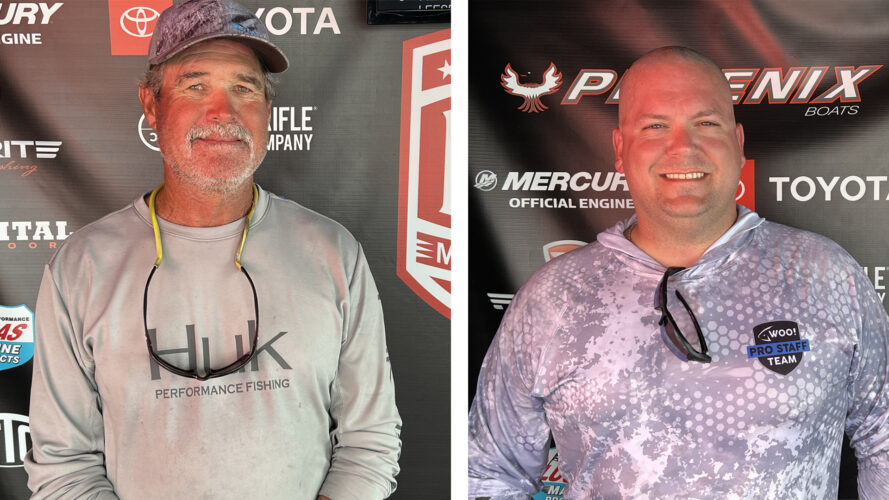 “What a great tournament,” Hunt said. “I caught fish all day long on a Heddon Zara Spook on the north end near Buckhead Ridge. I was just trying to stay in clean water near spawning flats where they had just finished spawning.”

Hunt said he targeted bass that were two feet deep with a white and yellow Spook, retrieved in a traditional fast walk-the-dog retrieve. Hunt said he caught 15 fish throughout the competition – all keepers – with the smallest one weighing 2 pounds.

“I found those fish earlier in the week when they were on beds,” Hunt said. “I went back in there on Thursday and picked up the Spook and started throwing it. The first fish I caught in there was a 6½-pounder, and then I caught a 5-pounder, and I said, ‘OK I’ve got to get out of here.’

“Saturday, we got there at 8 o’clock and stayed until 2 o’clock,” Hunt said. “When they hit the Spook it was explosive. And when they hit it, they were pulling drag right out of the gate.”

Ronnie Buck had largemouth that weighed 7-pounds even that was the heaviest of the event in the Boater Division and earned the day’s Berkley Big Bass Boater award of $850.

Jake Suvak caught the largest bass in the Co-angler Division, a fish weighing in at 7 pounds, 8 ounces. The catch earned him the day’s Berkley Big Bass Co-angler award of $425.