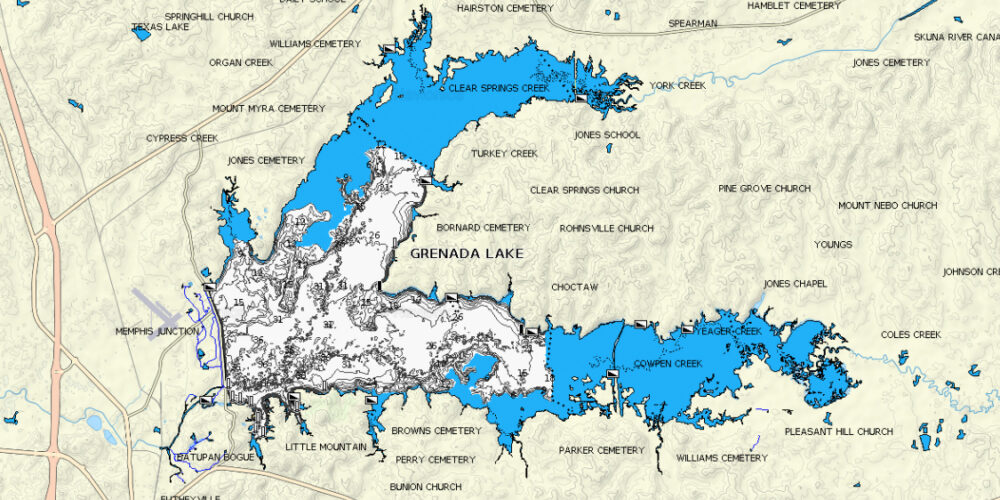 The 2021 Phoenix Bass Fishing League Presented by T-H Marine Mississippi Division will continue the season April 17 on Grenada Lake. The third stop in a diverse schedule gives anglers the chance to fish Pickwick Lake, the Columbus Pool of the Tombigbee River and also Lake Ferguson. Grenada is a world-class crappie fishery in addition to a decent bass pond. With the fish active and in a variety of spring phases, the fishing should be pretty good for Mississippi Division anglers.

Built in the 1950s, Grenada Lake is a reservoir on the Yalobusha River. As a U.S. Army Corps of Engineers project, Grenada was built to control flooding in the Yazoo River basin and the Mississippi River. At about 35,000 acres, Grenada isn’t huge, but it has plenty of cover for bass and is predominantly less than 30 feet deep.

Notably, Grenada is known as a crappie fishing destination more than a bass fishing destination. Crappie tournaments frequent the lake, and on any given day, most anglers on Grenada will be chasing crappie. Outside of crappie, the lake has a good population of largemouth bass and plenty of shad for them to feed on.

Because it’s a flood-control reservoir, the lake fluctuates a lot and there isn’t much grass. Still, there’s a lot of natural and planted brush in the lake, as well as cypress trees and other wood cover. Additionally, the lake has a lot of flooded roadbeds, fence rows and tractor trails that bass can use as highways to and from the spawning grounds.

Tackle Warehouse Pro Circuit pro Pete Ponds is one of few pro anglers with a Mississippi address, and he’s actually fished Grenada and its sisters, Enid Lake and Sardis Lake, quite a bit.

“I’ve had a lot of experience on those lakes, they’re fun lakes, and they can be real good,” Ponds says. “With no slot limit, that will be fun. There used to be a lot of tournaments there, local tournaments, we used to fish it three or four times a year”

As for the stage of the fish, Ponds figures the bulk of the bite will be shallow.

“It’s going to be postspawn, there will be a few on beds, but postspawn will be the main function,” Ponds says. “A lot of it is dirty water, so if you go back in the shallows and throw ChatterBaits and floating worms you can catch them. And there might be some fry guarding going on.”

Though there’s a decent amount of offshore structure in the lake, the murky nature of the fishery and the time of the year has Ponds thinking it won’t play too much.

There are a couple other factors to look into, in addition to Ponds’ main ideas. The first is the cypress trees that were planted and have flourished over the years. Another is the backs of creeks. On Grenada, the back ends of most of the creeks are actually quite deep, and could hold quite a few fish this time of year.

From a technique standpoint, a lot of shallow standards should work. Ponds thinks baits like a floating worm, a Yamamoto Senko and a vibrating jig will be players. For offshore fish, crankbaits and Carolina rigs have done a lot of damage in Mississippi over the years.

Ponds also thinks that you might be able to have a lot of fun and win the event along the way. “Topwater was really an effective technique for me there, even during the spawn, we used to use it a lot there,” Ponds says. “Something like a Pop-R or another chugging bait could be really effective, especially postspawn when they’re guarding the fry.”