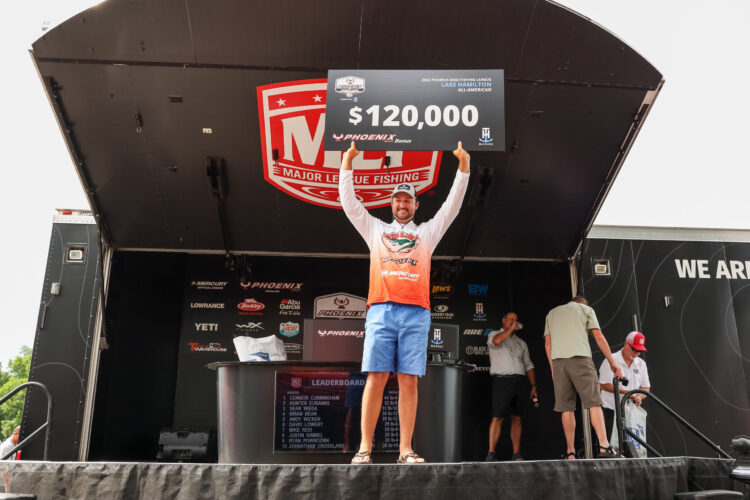 Cunningham led the event from start to finish and ended the job Saturday with an 11-pound, 10-ounce limit, which gave him the win with a three-day total of 44 pounds, 4 ounces – an 11-pound, 11-ounce margin of victory. Cunningham would have won if he had not even made a cast on Saturday.

“Lake Hamilton fishes a lot like my lakes from back home in Missouri, so I’ve just kind of applied what I know from fishing back home over the years and it worked out well here,” Cunningham said.

While many competitors spent the event offshore targeting the numerous Lake Hamilton brush piles, Cunningham caught all but one of his 15 weigh-in fish in just 2 feet of water or less.

“I had been down here in April and knew that I could catch 10 pounds out deep fairly easily,” Cunningham said. “I spent our optional practice day committed to topwater and it didn’t take me long to find a good bite. The key was just covering water.”

Cunningham has aspired of taking his bass-fishing career to the next level – he had planned to compete as a boater in the Toyota Series this season, until a scheduling conflict forced him to scrap those plans and concentrate on the Phoenix Bass Fishing League. Now, with a $120,000 payday, Cunningham says he is ready to make the move up.

“This money means a lot, and it gives me the security as I take that next jump up,” Cunningham said. “This is huge for me in my journey to doing this full-time. I aspire to fish professionally one day and this win certainly helps with that. I’m just speechless and so blessed and honored to be here and win. This is a good group of guys in this field, so to win this one is really special.”

The Top 10 boaters at the 2022 Phoenix Bass Fishing League All-American on Lake Hamilton are:

The highest-finishing boater from each Regional Championship (including the Wild Card) at the All-American now advance to the Toyota Series Championship for a shot at winning $235,000.

The eight boaters that finished highest from their region earned an automatic qualification in to the 2022 Toyota Series Championship on Lake Guntersville are:

“This is unbelievable,” an emotional Horton said after learning he’d won. “I never expected to win this in a million years. I’ve been fishing tournaments for the last 10 to 12 years or so, and this is pretty awesome.”

The construction supervisor from Mississippi credited a Zoom Finesse worm – both red bug and green-pumpkin – as being his key bait this week.

“I threw a finesse worm every way that you could rig it this week,” Horton said. “I caught fish from one foot deep to 20 feet deep with my boaters. I used a Carolina rig, a Texas rig, a wacky rig, a drop-shot rig, and on a shaky head.”

Horton said he doesn’t fish BFL events for a chance at turning pro or gaining big sponsorships. He fishes for the love of the sport and the enjoyment it brings him personally.

“Fishing is just fun to me,” Horton said. “I don’t want to turn it into a job. I feel like I wouldn’t love it like I love it now. I’m happy with what I’m doing now and I’m happy that an event like the All-American exists so I can fish it.”

Overall, there were 29 bass weighing 35 pounds, 4 ounces caught by the final 10 Strike King Co-anglers on Saturday. Horton was the only co-angler to bring a five-bass limit to the scale on Saturday.

The highest-finishing Strike King Co-angler from each Regional Championship (including the Wild Card) at the All-American advance to the Toyota Series Championship for a shot at winning $33,500.

The eight Strike King Co-anglers that finished highest from their region and earned an automatic qualification in to the 2022 Toyota Series Championship on Lake Guntersville are:

The three-day Phoenix Bass Fishing League All-American Presented by T-H Marine on Lake Hamilton was hosted by the Arkansas Department of Parks and Tourism and Visit Hot Springs. The event featured the nation’s best weekend grassroots anglers competing for a top prize of up to $120,000, and a top prize of $50,000 for the winning Strike King co-angler.

The full field of 49 boaters and 49 Strike King co-anglers competed on Days 1 (Thursday) and 2 (Friday) of the event. After two days of competition the field was cut to just the Top 10 boaters and co-anglers based on two-day total cumulative weight, and the final 10 anglers competed on Championship Saturday. The boater and co-angler that caught the heaviest three-day total weight earned the title of the 39th Phoenix Bass Fishing League All-American Champions.

The 2022 Phoenix Bass Fishing League Presented by T-H Marine is a 24-division circuit devoted to weekend anglers, with 128 tournaments throughout the season, five qualifying events in each division. The Top 45 boaters and Strike King co-anglers from each division, along with the five winners of the qualifying events, will advance to one of six Regional Championships where they are competing to finish in the top six, which then qualifies them for one of the longest-running championships in all of competitive bass fishing – the Phoenix Bass Fishing League All-American. The location for the 2023 Phoenix All-American Championship will be held at a location announced soon.