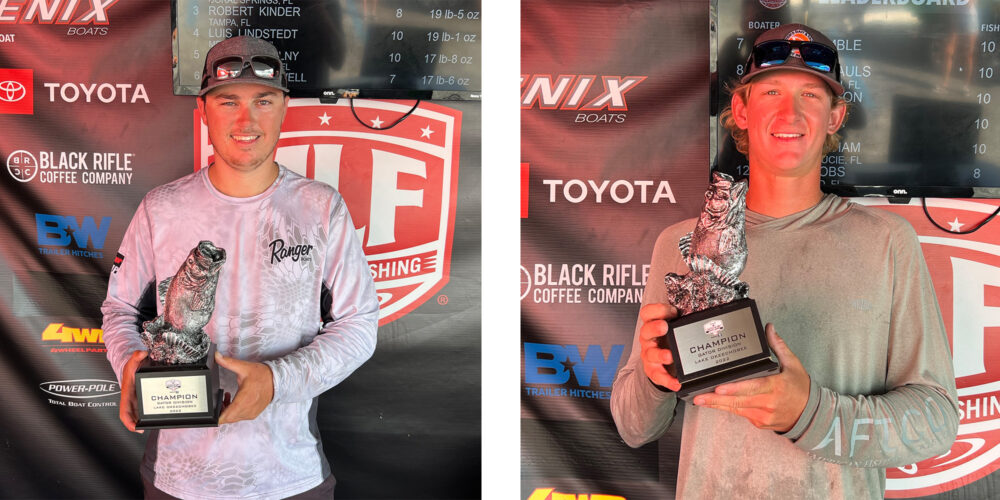 Hoinig said he found his tournament fish late during his practice on Friday. He caught almost all of his fish that he weighed from that area, pitching a black and blue Gambler Fat Ace Stick Worm on a 5/0 Gamakatsu Heavy Cover hook with an Ark Fishing Tungsten Weight. He fished his rig with a heavy Ark Invoker Pro rod and 65-pound-test braid line.

“The fish were staging and getting ready to spawn,” said Hoinig. “It was just an early wave of fish that was coming up. I was one of two boats fishing in there; the third-place finisher was the only other guy in the area. I milked that area pretty good. I caught only one other fish I weighed in from another spot.

“This win feels awesome,” Hoinig added. “I’ve been fishing BFLs for eight or nine years and never won. I’ve had buddies win one and they all say, ‘You’re time is coming.’ I finally got it done, and it feels freaking awesome.”

Bob Knoerzer of Winter Springs, Florida, caught a bass weighing 8 pounds, 15 ounces – the heaviest of the event in the Boater Division – to earn the Berkley Big Bass Boater award of $1,042.

Jarrett Vick of Archer, Florida, caught the largest bass in the Strike King Co-angler Division, a fish weighing in at 6 pounds, 3 ounces. The catch earned him the Berkley Big Bass Co-angler award of $521.