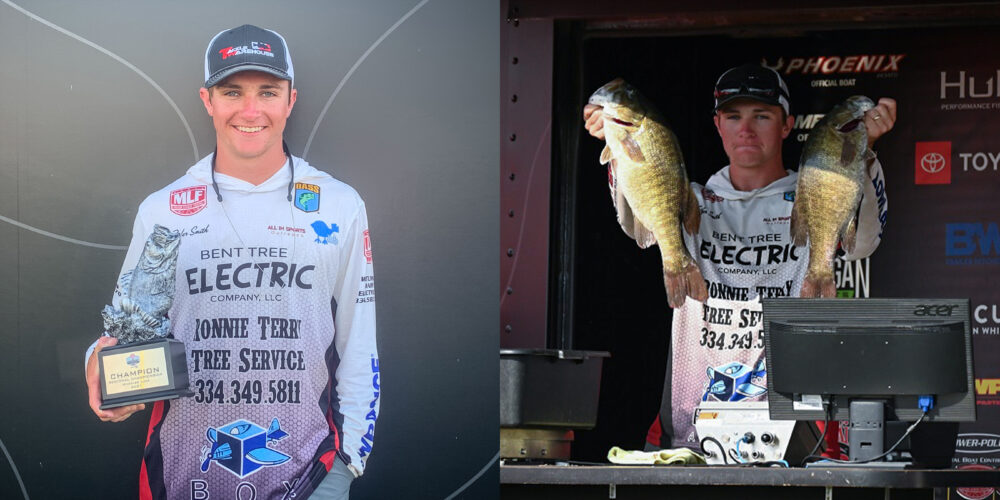 Just 20 years old and married for two weeks, Tyler Smith of Selma, Ala., put together three great days on Wheeler Lake to win the Phoenix Bass Fishing League Presented by T-H Marine Regional. Qualifying out of the Bama Division, Smith caught four for 10 pounds, 1 ounce on Day 1, moved into the Top 10 with a limit for 14-7 on Day 2 and rocketed up to first with 18-8 on the final day. Totaling up 43 even, the win is his first with MLF and netted him a new Phoenix boat and motor combo and $10,000, plus he’s now qualified for next year’s All-American on Lake Hamilton.

With just one previous experience on Wheeler, Smith committed to the upriver section in practice.

“That’s where I was going to live or die,” he said. “I only had two days of practice, I thought I’d learn as much up there as I could. And I had a decent practice, I was catching about 8 or 9 pounds a day, and I thought that might get me to the final day if weights were as low as I thought they might be.

“The first day of the tournament, I got up there to my current stuff, and the water was chocolate milk from all the rain the night before,” Smith said. “I stayed up there until about 12 o’clock, and finally I had to do something different. I just ran down the lake and fished some obvious stuff, and pulled up to a bridge and saw some fish busting behind me. As I was trolling to them, I looked down at the depth finder and thought ‘That looks like fish on the ledge.’ I picked up my crankbait, turned around, made a cast, and that’s how I found the magical spot.”

The magical spot turned out to be a shell bed in about 12 feet on the edge of a ledge that he was able to Spot-Lock on and cast along, bringing his bait down with the current parallel to the break. On Day 1, he managed four keepers off it in the last 45 minutes of fishing, and he rode it the rest of the way.

On Day 2, he started there, tallying a pair of 4-pounders, a 3-pounder and a keeper before it went dead and he ran up the river to catch his fifth keeper.

It really went down on Day 3, but it took him all day.

“I went out and told myself the fish are on that shell bed to win,” Smith said. “I started there the last day, and they weren’t really there. I caught one 4-pound smallmouth on the jig, and that was really it. I couldn’t get any more bites.”

After running up the river again and catching a tiny keeper in the back of a creek, Smith knew he needed to be down on his main spot to have a shot at a win.

Catching eight smallmouth, four spotted bass and two largemouth on the week, Smith won by more than 3 pounds but needed every last fish to do it. The magic bait was a chartreuse and blue Strike King 3XD, fished on 12-pound Bass Pro Shops Excel mono, which he burned the first few days and fished a little slower for his final afternoon flurry.

“That is the only thing I could get them to bite on that ledge, except for that one jig bite,” Smith said of his crank. “Other than that, I couldn’t get them to hit a jerkbait, come up on topwater, hit a shaky head, I couldn’t even get a bite on a drop-shot. The only thing they would touch was that crankbait, and they were absolutely eating it – the one dead fish I had was because it absolutely choked a crankbait. I felt bad for that, but that’s the way they were eating it.”

Leaving college after about a year, Smith started fishing BFL events and working at the family electrical business. Now, he’s earned a sterling win after three days against some of the stiffest competition the BFL level can offer.

“I still am speechless, I’ve talked to family, and that’s all I can say,” he said of the win. “It’s something I’ve dreamed of and worked hard at for a long time, and to watch it come true, I feel fortunate, because I know there are a lot of people that have worked, if not harder than me, at least longer than me, and still have not been able to accomplish something like this. I feel very blessed.

“I was still using my dad’s boat, the one he let me use since high school,” Smith said. “The first thing I said to him when he hugged me at weigh-in, I said ‘I ain’t gotta use your boat anymore.’ My wife and I had just been looking at buying a boat, it’s funny how God works things out. Everything that has happened lately has just been a dream come true, that’s the best way I can explain it.”

The top six boaters and Strike King Co-Anglers qualified for the 2022 All-American.