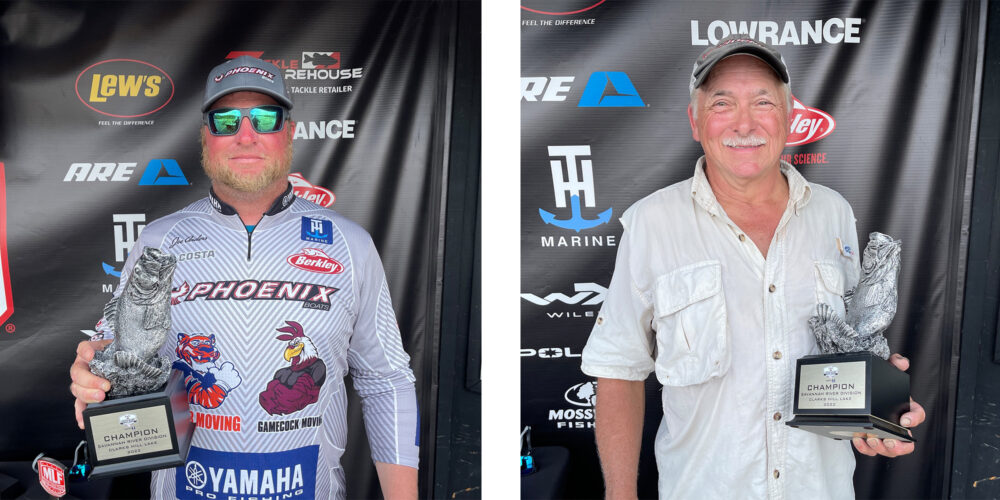 “I had a good practice Friday,” Anders said, who notched the second BFL win of his MLF career. “I located some bigger fish shallow that were cruising on flats, and I told my fishing partner that I could win if I could get one of those fish to bite.

“I had found two or three places that I could catch the quality of fish that everyone else was catching fairly easily,” continued Anders. “I caught basically what the top 5 caught in the first hour of fishing. And then I caught my second kicker fish about 1:15.”

Anders said he targeted larger bass on flats around flooded trees in less than 2 feet of water with a Manley Custom Tackle Buzz Toad paired with an Undertaker Bait Company bluegill-colored fluke bait. He said he also relied on a Megabass Magdraft swimbait and a bluegill-colored Texas-rig. He added he caught topwater fish on an Evergreen JT 95 Topwater Walking Bait.

“I was due for this win,” Anders said. “I’ve had some decent finishes at Clarks Hill before. There have been tournaments I felt I should have won, but I’ve had some mishaps – losing fish or equipment malfunctions – that cost me the win. But it wound up right this time. When it’s your time to win, it’s your time. I certainly don’t take these wins for granted, because I know how hard they are to get.”

Brad Benfield of Demorest, Georgia, caught a largemouth weighing 5 pounds, 14 ounces – the heaviest of the event in the Boater Division – to earn the day’s Berkley Big Bass Boater award of $520.

Hancox caught the largest bass in the co-angler Division, a fish weighing in at 5 pounds, 9 ounces. The catch earned him the day’s Berkley Big Bass co-angler award of $260.

The 2022 Phoenix Bass Fishing League Presented by T-H Marine is a 24-division circuit devoted to weekend anglers, with 128 tournaments throughout the season, five qualifying events in each division. The Top 45 boaters and Strike King Co-anglers from each division, along with the five winners of the qualifying events, will advance to one of six Regional Championships where they are competing to finish in the Top six, which then qualifies them for one of the longest-running championships in all of competitive bass fishing – the Phoenix Bass Fishing League All-American. The 2022 All-American will be held June 2-4 at Lake Hamilton in Hot Springs, Arkansas and is hosted by the Arkansas Department of Parks and Tourism and Visit Hot Springs.