Top 10 Patterns from the All-American on Lake Hamilton 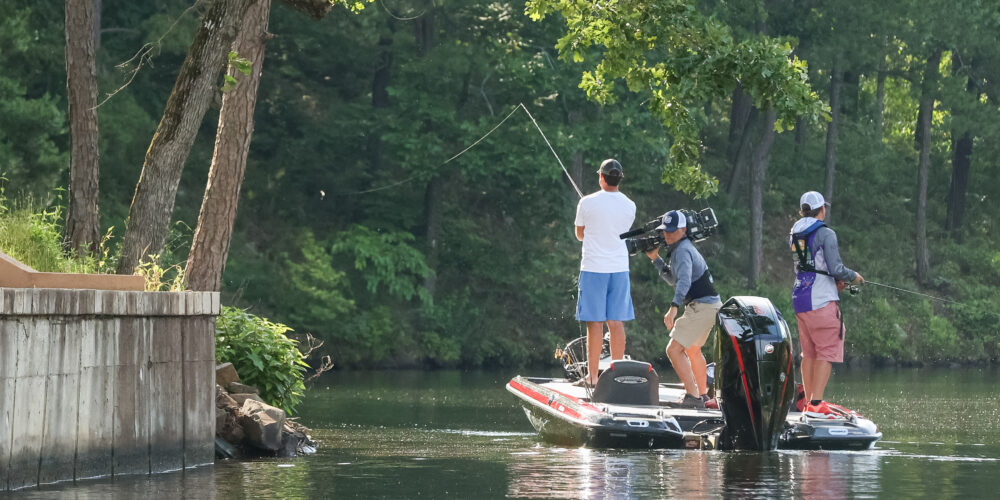 Connor Cunningham dominated the All-American shallow, but there were a number of ways to catch a bass on Lake Hamilton.
June 8, 2022 • Mason Prince • Phoenix Bass Fishing League

HOT SPRINGS, Ark. – It was tough to produce a big bag on Lake Hamilton for the 39th annual Phoenix Bass Fishing League Presented by T-H Marine All-American—unless your name was Connor Cunningham, who rode a shallow topwater bite to a dominating victory. The three days of fishing in the Ozarks proved to be difficult for even the Top 10 boaters, as they had to navigate weather changes and changes in water clarity. Still, everyone inside the Top 10 was able to fill their limit every day of the competition. Here’s how they all did it.

Hunter Eubanks was the closest man in the standings to Cunningham, but was never really able to challenge him on the final day. However, it was a solid week for the South Carolina boater. He spent the majority of his time tossing a shaky head or a jig around boat docks in shallow water, never really going out deep.

Eubanks had confidence the first two days of the event because he didn’t have to fish his best stuff to make the Top 10.

“The juice was some stained water in the back of a creek where I never saw anyone else fishing during practice,” Eubanks said. “I had bites in practice that I would have loved to have had on Saturday.”

By the time Eubanks finally got back to that area on Saturday, the water had cleared up and the fish had moved out into deeper water.

“That cooler water up the river caused there to be a sight fishing show going on up there,” Wieda recalled. “There weren’t a lot of them, but enough to make you spend a lot of your time on them.”

By the time Saturday rolled around, a lot of those bed fish had moved into deeper water and were suspended under docks. That’s where Wieda was able to find them and fill his limit on the final day.

Local hammer Brian Bean was right there in the thick of it with a fourth-place finish on his home lake. Bean fished offshore brush piles in about 10 to 20 feet of water with a 12-inch Berkley PowerBait Power Worm for the first two days. But after his spots out deep got pretty beat up, he moved into shallow water near the bank.

Andy Wicker’s strategy he had from his practice days did a complete 180 when Day 1 came around. He admitted that he tried to fish shallow in practice, but didn’t really have much success. His deep bite was good enough that he felt as though he could catch 10 to 12 pounds a day out deep and stay in contention.

When his deep bite fizzled rather quickly on Day 1, he returned to shallow water where he would stay for the rest of the time. Using a buzzbait and a jig, Wicker was able to stay in the Top 10 all tournament long.

6. Lowery Goes up a Creek

Mazarn Creek was the home for David Lowery during the All-American. He spent all of his time in that creek, moving deeper and deeper into the creek every day. With a combination of SPRO Bronzeye Poppin’ Frog, an Accent Jacob Wheeler Custom Triple Willow Spinnerbait and a Z-Man ChatterBait, Lowery fished around docks, wood, sandbars and whatever else he could find back there.

Lowery had the creek to himself all week along, never really seeing another boat in there to contend with. That was good news to the Georgia angler, who felt right at home after finding it while back home on his couch in Milledgeville, Georgia.

“I sat at home and was looking at maps and places that looked like what I would fish at home,” Lowery said. “I’m not a deep water fisherman, so I knew I wasn’t going out deep. I found this creek arm that I really liked, fished it in practice and got great bites, so I stayed there the whole time.”

Mike Reid split time between shallow and deep water on Lake Hamilton. He began his first day with a plan he was confident in before it started to fall apart on Day 3.

“It was all over the place for me this week,” Reid said. “I would start offshore every morning and try to catch my limit that way. Then I would head up shallow and try to cull. That worked for the first two days. On the final day, I couldn’t catch anything offshore, so I went shallow and caught my limit, then culled out deep.”

Reid pulled up to the weigh-in with, what he said, was at least 25 rods on the deck of his boat. His final day on Hamilton was a confusing one, throwing him for a loop and making him scrounge for bites however he could. Even after notching a seventh-place finish, Reid still feels like he was left with more questions than answers.

“If you asked me how to catch a fish out on Lake Hamilton tomorrow, I wouldn’t have a dang clue what to tell you,” he said with a chuckle.

8. Mixing It up Worked for Kimmel

It was a tale of three different days for Justin Kimmel. On Day 1, he was mainly fishing offshore brush piles. When Day 2 rolled around, Kimmel made the move to shallow water looking for delayed spawners and fish on beds. Day 3 was really about just finding five bites for Kimmel, as he combined to work shallow and deep water for whatever he could find.

If you were looking for Ryan Powroznik during the week, you most likely found him out deep fishing brush piles. But not just any brush piles. The Virginia angler had a system he was using before the off-limits period on Lake Hamilton a few weeks ago to help make him more efficient during the All-American.

“A couple of weeks ago I came out here for four or five days just idling around seeing what I could find,” Powroznik said. “I found some brush piles that I liked, so I labeled them with their depth. That way, if during the tournament there was a depth that really seemed to be the key, I could just pick the piles that were at the right depth.”

Powroznik said that key depth for him was between 12 and 14 feet. Still, on the final day, Powroznik did move shallow and found some bedding fish to go along with what he had found out deep.

Johnathan Crossland was focused in on dock fishing where there were bream located around the dock. He did say that he moved into offshore brush piles at the end of Day 3 and was able to cull that way. However, the vast majority of his fish were found up shallow with a buzzbait and a frog.