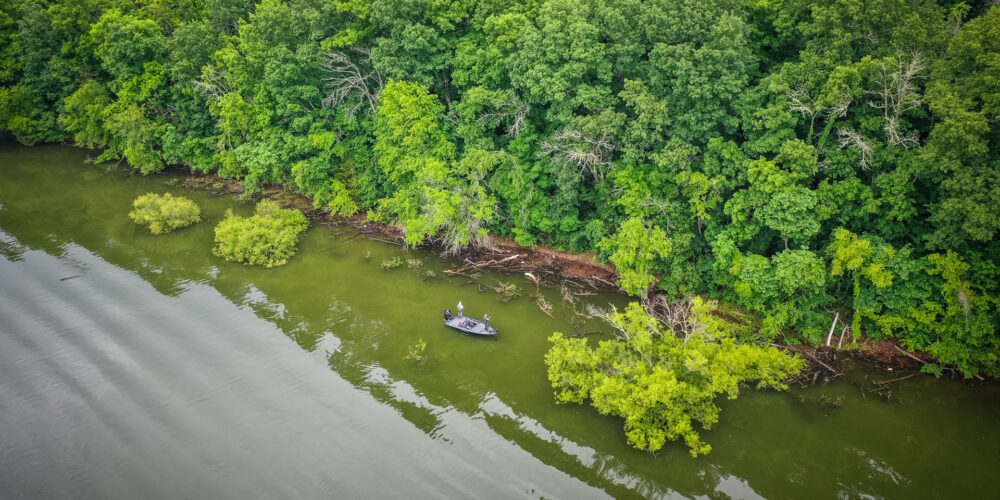 The Phoenix Bass Fishing League Presented by T-H Marine All-American is living up to its name, with the top five anglers finding success with fishing styles from all around the country. Day 1 of this event, presented by TINCUP, has proved that here on Douglas Lake, it’s still anyone’s game.

Leslie Brandenburg jumped out to an early lead with five fish for 18 pounds, 6 ounces. Behind him is an excellent field of anglers from every corner of the country.

Here’s how the rest of the top pros got it done on Thursday.

Hailing from Rutherfordton, N.C., Cody Hoyle was able to crank up a second-place limit by focusing on long, tapering points. Finding all his fish offshore, he reached them long-lining with a Strike King 6XD crankbait. Knocking on the door of 16 pounds, he still feels like he left a few fish out there.

“I’ve had the same thing about every day in practice,” Hoyle says. “We should’ve had about 20 pounds today but I lost a couple big ones.”

Hoyle has found that his spots are consistently replenishing, and he plans to run the cycle until the well goes dry.

“We keep running back; those fish will keep coming back and regrouping,” Hoyle adds. “We’ve got it pretty much figured out. Hopefully we can do it again tomorrow.”

Sticking to his Southern roots, Georgia native Blake Tomlin stayed shallow to land a 15-pound, 7-ounce limit and keep himself firmly in the hunt.

“I fished some deep spots in practice and there was a lot of pressure out there,” Tomlin says. “I’m not a deep guy, so if it was going to be easy out there, I’d fish that way. Since it’s not, I figured I’d do what I want to do.”

The game plan paid off mid-morning, as Tomlin was able to capitalize on some quick bites in his prime spot.

“I got on a little flurry about 9:30 or so and caught a few,” he explains. “I left the place I was fishing, and I think I left a few biting that I should be able to catch some tomorrow.”

With so much appetizing cover in the shallows, Tomlin found that focusing on flat spots with clean structure allowed him to fish more efficiently. He also noticed that changing conditions often required changing baits.

“If the wind started to blow, I’d get a bite or two on something moving,” Tomlin adds. “If it was real calm, they were being kind of funny and I had to finesse ‘em a little bit.”

No matter what the conditions bring tomorrow, Tomlin plans on sticking to his guns.

“At this point I’m going to stay shallow the entire tournament,” he admits. “If I catch them, I do. If I don’t, I don’t.”

Kyle Kitts had a long drive to Douglas Lake from Joplin, Missouri, but he didn’t have a long run to make on Day 1.

“I’m not going very far,” he says with a smirk. “I stayed shallow all day.”

Kitts is beating the bank and the competition by picking apart key pieces of cover.

The lynchpin to Kitts’ limit was a 4-pound kicker that secured his spot in the top five.

“I don’t think catching fish is very hard [this week]; it’s just getting that big one. It’s going to be hard to replicate.”

Right on Kitts’ heels, Chris Baldwin is in familiar territory. Baldwin has finished second in the BFL All-American twice and has another third-place finish under his belt as well.

“I’m trying to extract a little bit of revenge this week,” he says. “I’m not sure I can get it done, but hopefully I can make the Top 10.”

This Lexington, N.C., angler has kept himself well within that mark by fishing a jig slowly in the “shallows” around mid-lake.

He’s hoping this strategy will finally add a first-place trophy to his shelf, and the $100,000 grand prize to his pocketbook.

“I’m going to stick to the same game plan tomorrow; that’s the only one I have.”